Making the Homeless Count With New Set of Definitions – Next City

Making the Homeless Count With New Set of Definitions 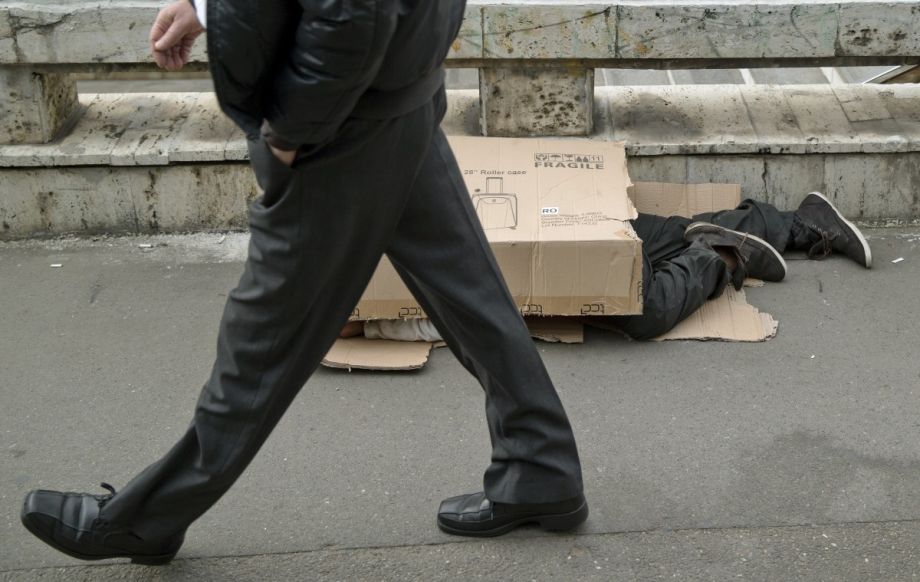 A pedestrian walks by a homeless man outside the main railway station in Bucharest, Romania. (AP Photo/Vadim Ghirda)

The world’s homeless population was pinned at somewhere between 1.9 million and 22 million in a 2009 book called The Hidden Million, and that estimate referred only to people living on the streets. Count those who are inadequately housed, including those living in shanties and squatting, and the stat starts somewhere around 41.6 million, with 730 million its upper edge. The United Nations cites a figure of 100 million; other institutions have other numbers. Every year, cities across the U.S. attempt to get a handle on their own homeless citizens with a far-from-perfect one-night count.

When it comes to worldwide estimates, there’s not just a problem with reporting, however. “The range is indicative of the lack of agreement about what’s included in the definition of homelessness,” says Dennis Culhane, a professor at the University of Pennsylvania. For example, some countries exclude refugees, while others count asylum seekers in their numbers.

Such inconsistencies are aggravating for researchers and policymakers who’re often left adrift in incomparable data, unable to discern which intervention strategies from different countries might be applicable to their own. That’s why, last month, Culhane and two colleagues, Volker Busch-Geertsema and Suzanne Fitzpatrick, working with the Institute of Global Homelessness (IGH) at DePaul University, published a model that presents a standardized framework that can be used to define homelessness around the world.

“The idea was to create a modular definition,” according to Culhane, meaning the purpose was not simply to narrow down all the disparate definitions into a singular, stamped-and-approved set of words that every nation agreed on. Rather, the framework leaves room for differing viewpoints to persist while paving the way for accurate data — “something that was both flexible and expansive enough but also leads to international comparisons,” says Culhane.

A metaphor might best explain the concept. Think of your family at a buffet with several kinds of food offerings where anyone can choose as many or as few of the dishes as they please. When everyone returns to the table, the broccoli appears to be identical on each person’s plate, as does the chicken, et cetera, regardless of whether they have three or four or 10 items. Which means that when your family is critiquing the food, you know that you’re discussing the same dishes.

Having that level of consistency is the goal of the new framework, which presents 17 types of homelessness broken into three main groups: people without accommodation (including those on the street), people living in temporary or crisis accommodation (like housing shelters), and people living in severely inadequate and insecure accommodation (such as those living under threat of violence). Before releasing the final version in September, the authors incorporated feedback from more than 100 thought leaders working in more than 20 countries, who gathered in Chicago for a conference at IGH in June.

“When we started the Institute last summer, the question people would always ask me is, ‘What exactly do you mean? You work on homelessness but isn’t that completely different anywhere you go?,” says Kat Johnson, director of IGH. “We wanted to spend time on this question upfront, so we could stop spending time on it every time people came together from across countries to talk about homelessness.”

The work by IGH isn’t the first attempt at an international framework. In fact, it’s largely based on the European Typology on Homelessness and Exclusion (ETHOS), arguably the gold standard in current use presently. “ETHOS was a great exemplar for what we wanted to do and a good building base,” says Culhane. But critics of ETHOS found conceptual weaknesses in its definition of homelessness, namely that it wasn’t inclusive enough of people living in minimal housing like makeshift shelters.

Thus far, the IGH framework has been translated into five languages and, according to Culhane, has received a warm reception from international researchers and policymakers.

But even if the new framework is in turn adopted throughout the world, it won’t fix the wide-ranging estimates on its own. “The national statistical organizations responsible for conducting period censuses have essentially punted,” says Culhane. Most countries don’t currently have comprehensive censuses that measure homelessness — or even the imperfect point-in-time surveys commonplace in major U.S. metros — but rather, extrapolate numbers from relatively small samples.

To assist with the larger reporting deficit, IGH is working to promote regional collaborative networks around the world to work on issues of homelessness, so that the national leaders in their respective geographic area can share strategies on gathering data and eventually, what to do about policy interventions. While that may be years down the road, Johnson believes there could be an immediate psychological benefit with the framework, for anyone working in the field.

“It has the added advantage of framing homelessness as a problem that you can break down into solvable parts, instead of a monolithic, terrifying thing that we don’t know where to start with.”