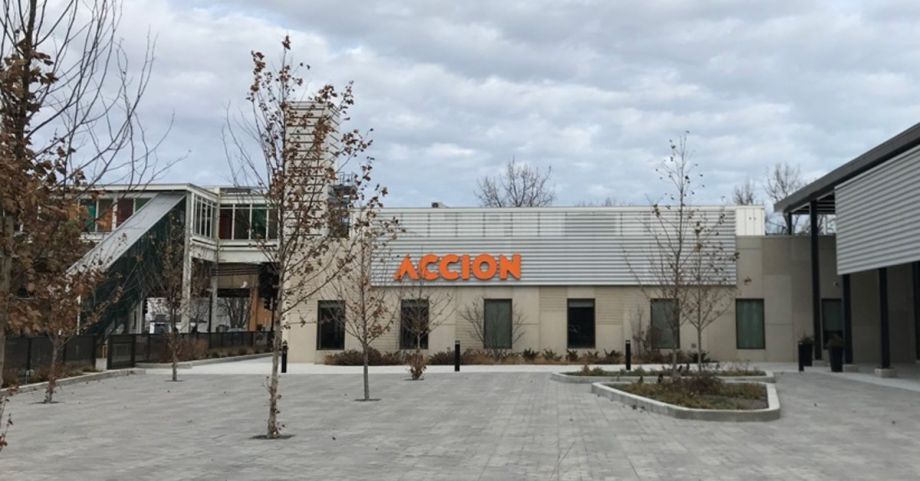 Accion is one of the handful of revolving loan funds that has been working with Aspen Institute to design the new EBA Fund. (Photo by Oscar Perry Abello)

Nagging reminders that the mainstream financial system isn’t designed to work for everyone show up in so many visible ways. Vacant houses or empty storefronts, occasionally a flash of color and the glow of neon lighting from a payday lender.

Based on the West Side of Chicago, Accion Serving Illinois and Indiana is a revolving loan fund for small businesses. It primarily makes microloans — defined as small business loans of $50,000 or less — to borrowers who otherwise may only have access to predatory lenders. Its average loan size is $8,000. Nearly 40 percent of its clients are Black, more than 20 percent are Latino, and three-quarters are low-to-moderate income.

Around the fifteenth of every month, the team at Accion compiles their monthly financial report, and when it does it also looks at its forecast for the next three months of loan demand. If they don’t have enough liquid cash to cover that, they might have to to borrow more — a painstaking process even for them, and it can take a month or longer. They might already be at their borrowing limit, which is based on the overall size of the fund. Another option is to sell some loans out of their portfolio, the way housing lenders sell loans to Fannie Mae or Freddie Mac. Two-thirds of the home mortgages are loans sold to Fannie Mae or Freddie Mac.

But when CEO Brad McConnell puts out calls to sell some of Accion’s microloans, he doesn’t always get calls back. The buyers, mainly big banks or regional banks, aren’t always interested in buying microloans to businesses like these.

“It gets to this notion we all know about, but can’t seem to solve for,” says McConnell. “There’s plenty of capital sloshing around the system, but institutions have struggled to find risk-sensible ways to invest in opportunities that serve underserved neighborhoods.”

There’s no equivalent for Fannie Mae when it comes to microloans — until now. This month, McConnell put in the first of many calls to the Entrepreneur Backed Assets Fund, a new entity created specifically to buy microloans from lenders like Accion all over the country, in rural as well as urban areas. Accion sold about 30 loans to EBA Fund, which anticipates buying 1,000 microloans by February. There’s tens of thousands more active microloans nationwide, and thousands of new microloans made per year — though it’s all still just a fraction of the potential demand for small business loans of this size.

Creating a secondary purchasing vehicle is a proven tool to encourage financial actors to do things at large volumes that they aren’t doing on their own. When it works, the underlying borrowers may not even realize what’s happening behind the scenes, because they only ever deal with their trusted lender who gave them the loan. That lender is now servicing the loan, meaning it’s funnelling those payments to someone else.

The 30-year fixed rate mortgage didn’t start to become the pillar of the home mortgage market until after 1938, when Congress created Fannie Mae specifically to buy those mortgages from tens of thousands of local banks and credit unions across the country. Those lenders had mostly never made such loans before, even after the availability of federal mortgage insurance for those loans starting in 1934.

It wasn’t all good news. From 1934 to 1962, the federal government insured $120 billion of home mortgages, but more than 98 percent of that went to white homebuyers to purchase homes in white-only suburbs. It was the official policy of redlining — the denial of federal home mortgage insurance to neighborhoods largely because they were predominantly Black or immigrant.

From its creation in 1938 to 1970, Fannie Mae only purchased loans covered by federal mortgage insurance, meaning it played a vital role in widening and perpetuating the racial disparities in wealth seen today. Most households’ wealth is in homeownership, and white families today have a median net worth of $188,120, compared with just $24,100 for Black families and $36,100 for Hispanic families, according to the latest figures from the Federal Reserve.

The passage of the Fair Housing Act in 1968 ended the official federal policy of redlining. The federal government finally started incentivizing lenders to make loans in Black neighborhoods. But the immediate result was a nationwide pattern of federally guaranteed loans for predatory home sales to Black households.

The buyers, primarily by Black women-led households, were looking for better options than the slum conditions they’d been forced into by discriminatory housing markets. But mortgage lenders and brokers frequently deceived buyers into taking out loans for homes that were often in worse condition.

The lenders could then sell those loans to Fannie Mae, allowing them to recycle the cash and just continue making loans to Black women for more homes that were falling apart. Author Keeanga-Yamahtta Taylor documents the history of this post-Fair Housing Act period in Race for Profit: How Banks and the Real Estate Industry Undermined Black Homeownership.

With that history in mind, EBA Fund is requiring lenders it purchases from to comply with the Small Business Borrowers Bill of Rights, a pledge and a coalition to support responsible and transparent small business lending practices. The Aspen Institute has been a key player behind that document as well as the new fund.

EBA Fund is also being selective about who it does business with. It’s buying only microloans, meaning small business loans up to $50,000 — amounts that small businesses most frequently need but increasingly can’t find, as Harvard Business School researchers note. And it’s working only with lenders that carry federal certification as a CDFI — which stands for community development financial institution, meaning at least 60 percent of their lending goes to low-and-moderate income borrowers.

With several affiliated offices across the country, Accion is one of a handful of revolving loan funds that has been working with Aspen Institute over the past few years to design EBA Fund. Accion’s Chicago affiliate was one of the first to start selling microloans to larger banks over the past few years, but demand has always been inconsistent. Previous CEO Jonathan Brereton left Accion’s Chicago affiliate to co-found Revolve Asset Management, the firm that is now tasked with managing EBA Fund.

EBA Fund also isn’t entirely copying Fannie Mae’s model. Along with Freddie Mac, the two mortgage giants keep some mortgages they buy on their balance sheets, but they are also in the business of “securitizing” mortgages — packaging them into mortgage-backed securities and selling them to pension funds, 401(k) retirement funds, insurance companies, endowments and other investors on the open market. An insatiable investor thirst for mortgage-backed securities eventually helped fuel the subprime mortgage crisis and Great Recession of 2008-2009.

EBA Fund isn’t securitizing microloans. Instead, EBA Fund is buying and selling each loan individually, though technically it does plan mostly to buy and sell loans mostly in bulk transactions involving dozens of loans at a time.

EBA Fund’s expected buyers are mostly big banks and regional banks who primarily want the loans on their balance sheets as part of meeting their obligations to low- and moderate-income communities under the Community Reinvestment Act.

Banks tend to be interested in buying microloans from smaller lenders only when they have a regulatory examination coming up. Failing a Community Reinvestment Act exam only happens two percent of the time, but it does happen. And each bank is only interested in buying microloans in geographies where it happens to be behind on its internal benchmarks for lending that would count on its next CRA exam.

Using its startup capital from a combination of foundations and a handful of banks, EBA Fund plans to serve a kind of clearinghouse function, buying microloans whenever they need to be sold and selling later to banks as they show interest. It’s a bit of a gamble, but that’s the point.

“We might hold those [microloans] for six months, 12 months, we might hold them all the way to term,” says Brett Simmons, principal at Revolve Asset Management.

If and when banks eventually buy some of its microloans, EBA Fund will also request they make a donation to the fund to cover at least part of the cost of making the loans and managing the fund. Seventy-five cents of each donated dollar will go to the lenders who originated the loans.

The six revolving loan funds who helped design EBA Fund are the first approved to sell loans to the fund, and it plans to add more approved lenders over time. The current EBA Fund lenders have a total portfolio of 11,000 microloans, according to Simmons. But there are many more eligible lenders across the country.

The Small Business Administration works with 144 lenders in its microloan program, which provides low-cost capital to lenders for the purpose of making microloans. In its 2020 fiscal year, the SBA microloan program supported 5,890 new microloans totaling $85 million — however, the SBA does not currently permit lenders to sell those loans to the secondary market.

Simmons says many small business revolving loan funds that have gotten funding from state or local government as well as the private sector do have microloans that are eligible for EBA Fund to purchase.

Simmons warns, however, that EBA Fund has only limited capacity at any one time to help less experienced lenders get enough practice collecting and maintaining sufficient documentation to be selling loans like this on a larger scale. But the fund has a three-tiered membership structure so that as less experienced lenders show they can manage it, they can move up into higher tiers requiring less handholding.

“The microlenders we work with adapt the loan products really well to meet the needs of the communities they serve,” says Simmons. “What we’ve done instead is try to standardize everything else, like the pricing and the legal documentation we use.”

The fund may also buy microloans from community banks and credit unions that carry CDFI certification, though those institutions don’t have the same challenges with liquidity as revolving loan funds. According to Simmons, the fund’s ultimate bottom line isn’t necessarily the volume of microloans it purchases, but how much it helps each lender grow and whether it can encourage more lenders to make responsible, affordable microloans across the country.

“There’s a ton of CDFIs that have done some microloans but not a lot, and the idea is if there’s a growth partner around they’ll be willing to do more,” says Simmons. “Our focus with growth partners is really going to be on CDFIs led by people of color as well.”