Madison Says No to Pod-Based Transit – Next City

Madison Says No to Pod-Based Transit 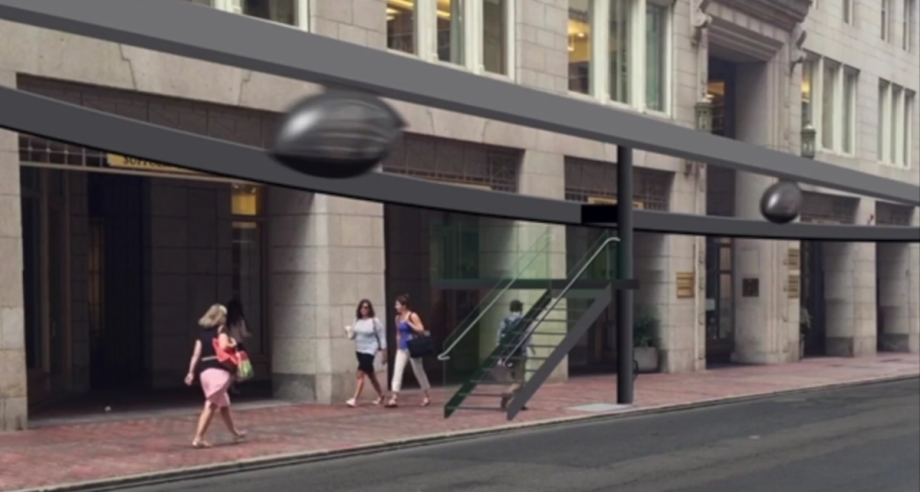 A rendering of Transit X's “podway” based system. (Via TransitX.com)

Will Pod People Zip Across Madison in the Future? Local Transit Planners Aren’t So Sure

For more than 75 years, engineers and designers have held up “personal rapid transit” — rail transit networks in which small vehicles would provide nonstop point-to-point service — as the solution to mass transit’s chief problem: making transit competitive with autos in terms of total travel time and convenience.

But to date, the concept has yet to be sucessfully implemented on a large scale. The closest anyone has come to this is the people-mover system in Morgantown, W. Va., a demonstration project opened in the 1970s.

A Boston company is now pitching the idea to officials in Madison, Wisconsin. The Wisconsin State Journal reports that Transit X has proposed a 108-mile network of “flying solar pods” for the city. The network, which would resemble a suspended monorail in design, would use four- to five-passenger vehicles to carry riders directly from origin to destination, with vehicles loading and unloading at off-line stations 20 feet above the sidewalk.

Transit X’s full-blown proposal would have 7,103 pods serving a network of 700 stations, traveling at speeds up to 45 mph. According to the company, 95 percent of Madisonians would live within a five-minute walk of a station. The company also proposed a much smaller network of 31 miles with 1,916 pods as a starter.

Transit X told Madison’s Transportation Policy and Planning Board June 3 that they could build this network at no cost to the city and have it up and running within a year. Company founder Mike Stanley told the board the system is a “silver bullet” that would ultimately render other forms of transport unnecessary. (For passengers, maybe; for goods, definitely not.)

Madison’s Transportation Department isn’t buying this argument, though. Department transit planner Mike Cechvala presented the board with a department analysis of the project that identified 10 reasons why the project isn’t feasible in Madison right now.

One of them: Transit X hasn’t actually built an operational line yet, just a prototype pod. Other obstacles the department identified included system safety, accessibility, overly optimistic revenue and construction time projections, how the pods would behave at intersections and securing air rights to build it.

Stanley told the board in response that an actual operating line is in the works: a 36-mile test track in a rural area near Atlanta. A New York investment banking firm is ready to finance its construction if the company can come up with money for the pre-construction costs.

The board said it would monitor the progress of the demonstration project and review the proposal again if it looked like it could actually be feasible, but for now, it decided to continue developing bus rapid transit for the city.

“I would never say something’s not possible because it’s great to think about different ways of doing things, but just this particular model at this time is unproven,” Madison city alderman Keith Furman told the State Journal. “It just doesn’t seem realistic, unfortunately.”

“We keep your world moving” is the motto of Singapore’s Land Transport Authority. By 2040, the agency that runs mass transit in the Southeast Asian city-state plans on keeping Singaporeans’ world moving much faster.

That’s one goal of a 20-year transit improvement and expansion plan announced on May 23 and reported on in the International Railway Journal June 3. The other is to expand the city’s rail transit system to make it convenient to more Singaporeans.

Or as the LTA put it, the plan seeks to create a “convenient, well-connected, inclusive and fast land transport system that will meet the needs and aspirations of Singaporeans over the next two decades and beyond.”

The plan seeks to turn Singapore into a “45-minute city with 20-minute towns.” The “20-minute towns” would serve as regional employment and commercial hubs that would bring jobs closer to residents, while the “45-minute city” represents the amount of time it would take Singaporeans to reach the city center from any outlying point.

The plan seeks to produce this result through a program of infill station construction on existing lines along with several new lines and extensions. One of the planned extensions will take the Downtown Line into the northwest part of the city and provide an interchange with the North-South Line, reducing travel times to the city center from the northwest by up to 30 minutes.

The plan also calls for a new extension of the Thomson-East Coast Line to serve Changhi Airport by 2040 as well as a feasibility study for a new line serving areas of the island’s north and northeast that currently have no rail service. This line could slash travel times into central Singapore by as much as 40 minutes for up to 400,000 households.

BART to Feds: It’s Your Turn Now to Help Us Unclog the Transbay Tube

While the New York City subway may be the most-used rapid transit system in the country, one could argue that there is no single subway line or segment as useful as the Bay Area Rapid Transit system’s Transbay Tube, which carries upwards of 28,000 passengers per hour at peak hours six miles across San Francisco Bay at 80 mph.

The tube kept people moving between San Francisco and Oakland when the 1989 Loma Prieta earthquake collapsed a section of the San Francisco-Oakland Bay Bridge’s east span, and on May 29 of this year, an additional 10,000 passengers crowded onto the tube to cross the bay when a fatal accident tied the Bay Bridge in knots again. That same day, Railway Track and Structures reports, BART officials sent a request to the Feds: Now that we have our share of what it will cost to increase the Transbay Tube’s capacity in hand, it’s time for you all to step up to the plate.

The money — $4.55 billion in all — would go towards a series of investments in signaling, rolling stock, power supply and storage and maintenance facilities. Together, the investments would increase train frequencies between San Francisco and Oakland by 30 percent and overall capacity in the tube by 45 percent.

BART officials have identified sources for $2.3 billion of the total but say that they can’t proceed with the improvements without another $1.25 billion from the Federal Transit Administration. That funding is currently tied up in the FTA’s Capital Investment Grants Program review process.

The trouble? The funding request has been stuck in the Federal pipeline for more than a year. BART estimates that each year of delay in approving the grant will add $120 million to the project’s cost.

“We can’t wait any longer” for the money, said BART General Manager Grace Crunican. “Our system is already at capacity.”

Both of California’s U.S. senators, Diane Feinstein and Kamala Harris, and seven U.S. representatives from the Bay Area jointly wrote Transportation Secretary Elaine Chao asking that the FTA get off the dime in approving the grant. “It is our understanding that BART’s Transbay Corridor Core Capacity project has satisfied all the requirements laid out in statute for advancement and has even received the highest possible technical rating — the only project in the program’s pipeline to do so,” they wrote.

The initial segment of Line 15 has four stations and runs for 5.3 km (3.3 miles) from Nekrasovka to Kosino, where riders can transfer to Line 7 via direct interchange with Lermontovsky Prospekt station. First proposed as the Kozhukhovskaya line, the new line is now called the Nekrasovskaya line.

The four stations continue the Moscow tradition of elegant architecture, only in a futuristic modern style. 31 equally futuristic trainsets provide service on the line at six-minute headways. The cars are stored at a depot at Rudnevo, northeast of Lukhmanovskaya station, one of the two intermediate stations on the initial segment (the other is Ulitsa Dmitriyevskogo).

This initial segment was constructed with two single-track tubes. Work is already underway on the line’s second segment, which will run in a single 10m (32.8-foot)-diameter two-track tunnel. The four-station extension will run from Kosino 9.7 km (6 miles) northwest to an interchange with Line 14, the Moscow Central Circle line, at Nizhegorodskaya, and is set to open next year.