As Los Angeles Gets Younger, Skid Row Gets Older – Next City

As Los Angeles Gets Younger, Skid Row Gets Older 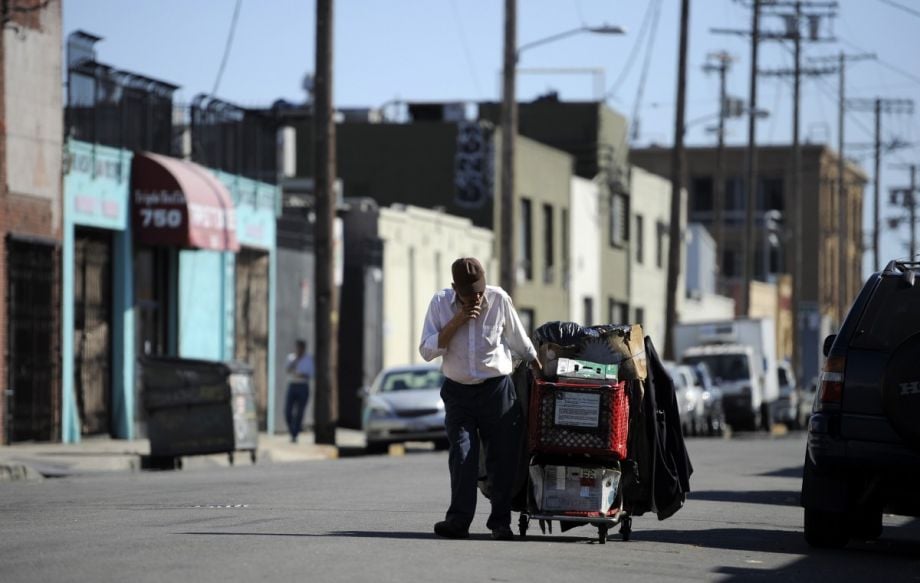 Costica Vrable pulls his cart up the middle of the street in front of the Mark Taper Inner-City Arts academy, in the Skid Row section of Los Angeles. (AP Photo/Mark J. Terrill)

The percentage of older homeless women on Skid Row has grown, according to a 2014 report by the Downtown Women’s Action Coalition, whose survey found 50 percent of women were over the age of 50 and 88 percent were people of color, with the majority identifying as African-American. The number of immigrant women has also increased over time. This trend in rising age corresponds with the findings of the most recent homeless count, conducted by the Los Angeles Homeless Services Authority, which found a 10.8 percent increase in homeless adults 62 and older between 2015 and 2016. Nationwide, people 50 and older make up 31 percent of the homeless population, an increase of 20 percent since 2004, according to the Department of Housing and Urban Development.

Older Skid Row residents are among the most impoverished elders — they’ve faced a lifetime of compounded hardship and often carry histories of mental illness, alcohol and drug addiction, and sexual and physical abuse. And they also reflect the looming obstacles for economically vulnerable seniors across the United States who face rising housing costs and being squeezed out of desirable, gentrifying urban areas as they attempt to “age in place” and remain in their homes and communities independently for as long as possible.

Since 2004 the number of elderly households that spent more than 30 percent of their income on housing has increased. Brandeis’s Institute on Assets and Social Policy found that over a third of older adults in 2010 were in danger of outliving their financial resources and cited growing housing costs as a “significant policy concern,” given the desire of older adults to age in place, combined with proposals to cut Social Security and Medicare benefits. Housing costs in expensive urban areas take an even greater bite out of many seniors’ household budgets. In Los Angeles, rent accounts for more than half the expenses of an older person living on her own, and 70 percent of these older California renters struggle to make ends meet. UCLA’s Center for Health Policy Research has found using the “Elder Index” that a half million California elders living alone, including 71,000 seniors in Alameda County, did not have enough income to pay for basic expenses such as housing, food, healthcare and transportation.

Along with moneyed “Uptowners,” economically vulnerable older people who have recently fallen on hard times continue to arrive on Skid Row, joining those already living there who struggle to stay. As more people discover the advantages of urban living across the country, seniors who live in expensive urban areas such as New York, Honolulu and the San Francisco Bay Area must fight to remain in their communities. Urban areas, even car-dependent Los Angeles, are ideal places for people to grow old due to their greater walkability, public transportation options and a denser infrastructure of social services. The advantages that make them attractive for older adults often draw younger, more affluent professionals who can afford to pay higher rents and desire upscale amenities and businesses. With LA.’s burgeoning downtown, already vulnerable elders in the poorest stretches of Los Angeles now face the added threat of gentrification, at risk of wrongful evictions and in danger of ending up on the street.

Older Angelenos deserve the city’s investment in helping them remain in their communities and homes independently for as long they can safely remain there. The shortage of affordable housing for seniors is a growing problem that will escalate with the aging of the city’s population. Demographers project that by 2030 the percentage of Los Angeles residents 65 and older will double, up from 10.5 percent today. While short-term sprucing up of low-income districts like Skid Row for affluent newcomers may seem like good economic sense, preserving affordable, low-income housing is more cost-effective and humane in the long run. Creating affordable housing for seniors is much cheaper than building expensive nursing homes. Along with a substantial investment in expanding affordable housing that integrates the supportive services that older adults require, Los Angeles can take some modest measures to preserve the existing affordable housing stock where seniors live, including strengthening eviction prevention services and legal assistance and providing supplemental financial assistance to older people on fixed incomes struggling to pay their rent.

California has already set an example for the rest of the country by signing into law the “Elder Index,” which gives social service agencies a more accurate measure to assess elder poverty. In reimagining downtown, Los Angeles has the opportunity to pioneer solutions to the pressing issues municipalities across the country face as their residents age.

Stacy Torres is an assistant professor of sociology at the University at Albany, State University of New York.