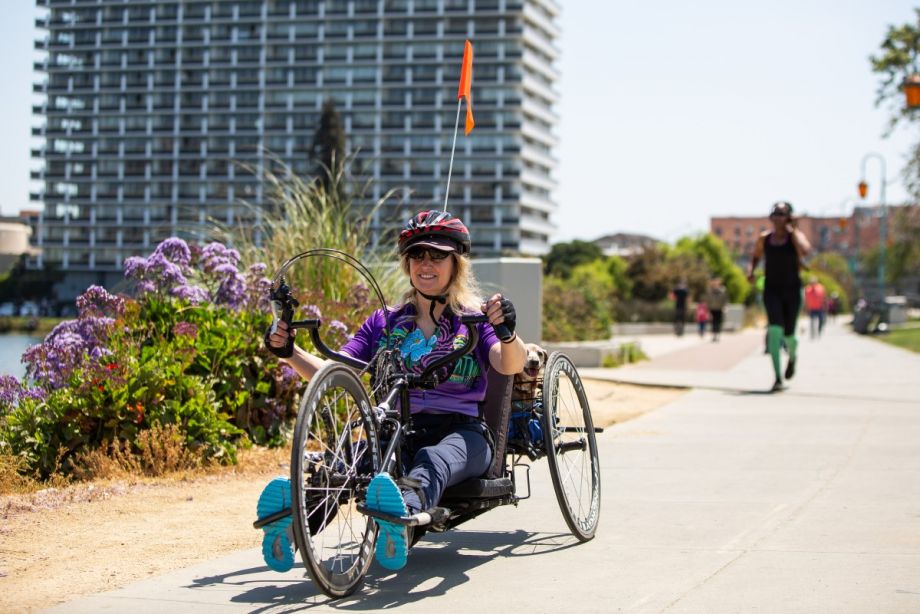 A user of the Oakland adaptive bikeshare pilot (and her service dog) during the launch event earlier this year. (Photo by Clane Gessel Photography)

In 2017, the Bay Area Bike Share program got its start with a smattering of bike-share stations in Oakland, Berkeley, Emeryville, San Francisco and San Jose. It has since exploded to 4,450 bikes across those five cities, with plans to expand to 14,200 in coming years. In the same timeframe, shared electric scooters and dockless e-bikes were added into the mix of alternative transportation throughout the Bay Area.

The rapid growth of bike and scooter share mirrors many cities across the United States. But in the Bay Area — known as the birthplace of the disability rights movement — it quickly became clear these forms of transportation could grow without accessibility in mind. So in March of 2017, Oakland’s Mayor’s Commission on Persons with Disabilities took the city to task for not providing an adaptive component to the bike-share system.

The result was a six-month pilot for adaptive bike-share this summer, beginning in Oakland and expanding to Golden Gate Park in San Francisco. The Bay Area is one of a handful of U.S. cities testing or fine-tuning adaptive bike-share — which means answering a looming question of how best to integrate adaptive bicycling into the traditional one-way bike-share model.

“The bike-share bikes that are out there — there’s only one type,” says Kerby Olsen, shared mobility coordinator with the city of Oakland. “There’s a lot of people it doesn’t work for, and not just because of disabilities. We need ways we can make bike-share serve a lot more types of bodies.” Still, he adds, “it’s sort of an open question of what will be the best long term model.”

Portland was the first U.S. city to introduce an adaptive bike share pilot, called Adaptive BIKETOWN, in 2017. The city established a model that’s been picked up in other cities: Partner with a local organization or bike shop that serves the disability community, then match riders with adaptive bicycles — like tricycles, hand cycles and side-by-side tandems — for recreational trips.

By using the same pick-up and drop-off point, and keeping it staffed, users can leave behind their wheelchair or mobility device, picking it up after their trip. It’s an important convenience, but means the program is closer to a traditional bike rental than bike-share, in which riders take one-way trips and drop off bicycles at stations around their city.

The nonprofit was a “natural partner,” according to Anh Nguyen, Oakland’s ADA programs division manager, as the organization runs an adaptive cycling center out of Berkeley. “The pilot staff, mainly operated by BORP, are there to assist the user, identify which [bike] model is appropriate, can transfer them from their mobility device, and care for their belongings.”

Because it was staffed, the pilot functioned as a “pop up” on certain days between set timeframes in popular locations for recreational bicycling. As the pilot wound down, the partnership released a survey and hired an outside expert to evaluate the findings. “We’ll regroup as a technical advisory committee to see how this program should change or evolve next year,” Olsen says.

Big questions ahead, according to Nguyen and Olsen, include how to scale adaptive bike-sharing, and how scaling might include an adaptive component to the one-way bike-share model.

How to scale remains a question in other cities where adaptive bike-share is growing.

In Detroit, year-over-year ridership on the Adaptive MoGo program increased 53 percent since the 2018 pilot launch. There is one pickup and dropoff location — run out of a brick-and-mortar bike shop near the Detroit Riverwalk — that some users found difficult to travel to. The goal is to expand by partnering with another brick-and-mortar location in the planned expansion area of the two-wheeled bike-share program, according to Rory Lincoln, director of programs and operations for MoGo.

“Right now, we’re building up a user base and rider profiles to ensure that there is demand to warrant the additional cycle parking infrastructure,” Lincoln says. With enough demand, he adds, the team may apply for grants to design adaptive bike-racks to facilitate one-way trips.

In Portland, adaptive rideshare increased from 59 rides in 2017 to 191 rides to date. A recap of the 2018 pilot found a range of users, including people with disabilities, caregivers, riders not comfortable on two-wheeled bikes, riders with injury or illness, or those interested in trying adaptive cycling.

“In Portland, we heard that people wanted a staffed service and a place to store mobility devices, so they were okay with the model that was more rental than bikeshare,” says Liz Hormann, Adaptive BIKETOWN program manager for the Portland Bureau of Transportation. “However, I have heard from other cities that the community really pushed for full integration of adaptive bikes into the docked bikeshare system. So while this model responds and works in Portland, it is important to first talk and listen to the community.”

Greg Milano was the former cycling program manager for Bay Area Outreach and Recreation Program and is now executive director for Inclusive Cycling International. He believes an “awareness-raising pilot” is the first step to increasing accessibility within alternative transportation modes. (As an example, work on the Bay Area adaptive bike-share contributed to an Oakland ordinance requiring e-scooter companies to offer adaptive scooters.)

Milano notes that while staffed program centers are necessary to make individual adaptations some riders need, many people with disabilities can ride standard adaptive bikes without modifications. “Ideally a city would be able to offer both a staffed adaptive bike share program in at least one location … and some self-service docked adaptive cycles available for 24/7 access like the two-wheel bike-share bikes have,” he says.

Whether the use be recreation or commuting, he believes that making bike-share accessible will create more robust support for cycling investments in cities — at a time reducing car-use is of utmost importance given the climate crisis.

“Every city that’s investing in cycling should strive to make it possible for people with disabilities to benefit from those investments,” he says, “Either through staffed programs, or self-serve bike-share, and ideally with both.”