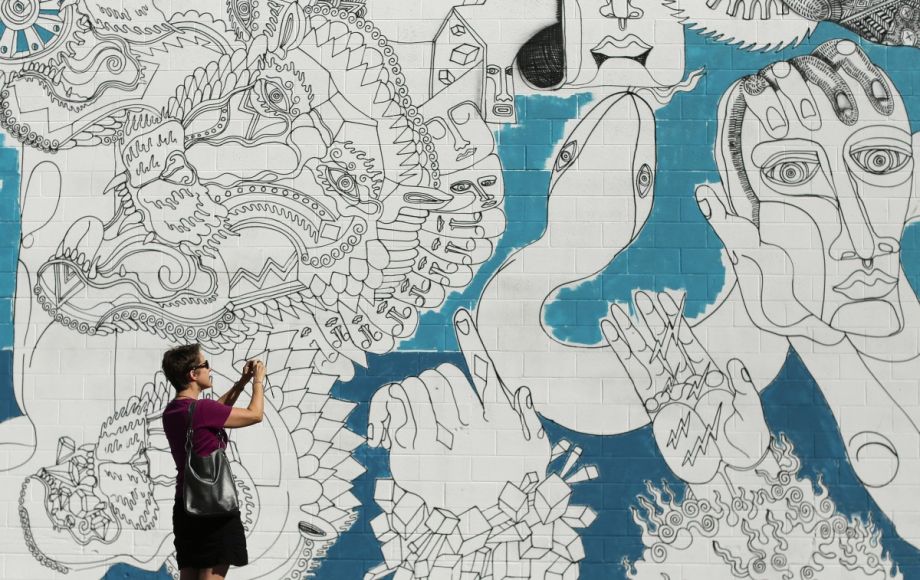 A visitor snaps a photo of a mural in downtown Las Vegas. (AP Photo/Julie Jacobson)

Five years after Zappos CEO Tony Hsieh set out on a $350 million venture (with his own money) to remake downtown Las Vegas (with a lot of five-year goals), the city center is still far from an urbanist dream, Quartz reports.

Hsieh’s vision to spark revitalization outside the Strip — which he dubbed the Downtown Project — was centered around moving his online shoe retailer’s headquarters into the city’s downtown district. Hsieh aimed to create the most “community-focused large city in the world,” but Quartz’s Aimee Groth writes that a crucial missing piece has been involving locals, and that “applying the same principles used to grow a startup into a 1,500-person company don’t translate perfectly into the walls of a city.” Read the piece, timed naturally at this fifth anniversary, here.

A few months after the project’s launch in 2012, Next City contributor Daniel Brook anticipated that the project would struggle if it failed to engage the community’s longest-term, most marginalized residents. “Hsieh’s community-oriented selflessness seems genuine,” Brook wrote. “The more salient worry is cluelessness. Hsieh’s tremendous wealth hasn’t made him greedy, just out of touch with the tribulations of his downtown neighbors, who house themselves week-to-week.”

The Downtown Project is still alive, but is focusing more on operations that can turn a profit, which mainly means bars. Other than that the project hopes to reach sustainability by 2018, Hsieh and the other Downtown Project leaders haven’t said much about the future. Hsieh instead is focusing on successes like a popular outdoor Container Park. To see kids and families walking around in a place that was previously pretty dangerous, that’s progress,” Hsieh said in August, “and [I’m] pretty happy about that.”