L.A. Gets Moving on Transit – Next City

L.A. Gets Moving on Transit 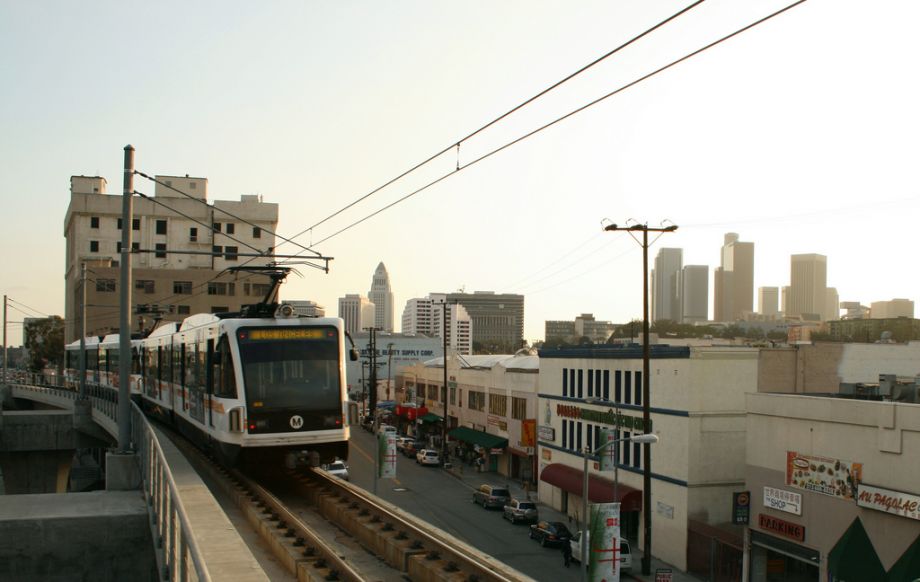 Ever since an earmark for the construction of a bridge to Gravina Island was slipped into the 2005 transportation bill, government spending of all types has been derided by conservatives with a reference to the “bridge to nowhere.” The National Review, for example, asked derisively last year why one bridge to nowhere is a national embarrassment while 1,000 bridges to nowhere are a stimulus.

Infrastructure projects, in particular, have become objects of ridicule for conservatives, rather than examples of investment for the public good. The bigger and more ambitious the project, the more of a waste it is presumed to be. So Louisiana Governor Bobby Jindal proved when he mocked the stimulus package’s “$8 billion” for “a magnetic levitation line from Las Vegas to Disney Land.” His liberal use of facts – for starters, the $8 billion went to numerous high-speed rail projects scattered throughout the country – further reveals his implication: such a project couldn’t possibly be a good use of taxpayers’ money.

But Los Angeles Mayor Antonio Villaraigosa is contesting the myth of the wasteful infrastructure project by hatching a transit expansion scheme that combines cost-effectiveness and job creation with an ambitious challenge to Los Angeles’s auto addiction.

In May, Villaraigosa traveled to Washington for the fifth time in three months to lobby for his 30/10 transit proposal. The plan would use federal funds – some combination of interest rate subsidies, loan guarantees, and direct loans, among other possible mechanisms – to speed the construction of twelve transit lines included in Los Angeles’s long-range transportation plan from thirty years to just ten.

The Mayor has argued his case persuasively, emphasizing the project’s environmental and economic significance along with its mobility and livability benefits for Angelenos. The transit expansion itself, even if not accelerated, has much to recommend it: 200 million fewer driving miles annually, 570,000 fewer pounds of emissions annually, and 80 million more transit trips each year. If accelerated, the plan would create 170,000 construction jobs over ten years, contributing to the economic recovery of a county with almost 600,000 unemployed workers. Additionally, 30/10 would save $3.8 billion by avoiding cost inflation already calculated into the transportation plan’s price tag while steering clear of the nasty parochial disputes that can derail a project when a transit system is expanded in piecemeal fashion. Finally, the Los Angeles County Economic Development Corporation estimates that the non-accelerated transit expansion would increase federal tax revenue by $2 billion, state tax revenue by $800 million, and local government revenue by $60 million over 30 years. An accelerated plan would likely have a similar fiscal impact but more quickly, providing revenue at a time when cash-strapped governments are starved for resources.

Not least important, 30/10 is designed to be revenue-neutral for Washington: Los Angeles will pay the federal government back for its assistance with revenue from a half-cent sales tax it passed to pay for the expansion.

At a time when Los Angeles is struggling to recover from the economic downturn, accelerating the city’s transit expansion would provide an immediate – and lasting – jolt to the region’s economy that would be felt statewide.

These benefits explain why California’s two senators and Los Angeles’s congressional delegation have expressed their support for the program and given Villaraigosa such a warm welcome in Washington. But the Mayor’s plan has also been greeted positively by several members of Congress who are themselves less invested in California, including transportation heavy hitters like Minnesota Representative Jim Oberstar and Oregon Representatives Peter DeFazio and Earl Blumenauer.

30/10 will not itself turn around Los Angeles’s economy, let alone that of the entire country. But with such a significant impact on the mobility, environment, and economy of the nation’s second largest metropolitan area by population and the world’s nineteenth largest economy, the project has national significance. Such impact turns heads even in Washington, especially when lawmakers consider the big infrastructure projects they would like built in their own districts and states.

Indeed, perhaps more important than 30/10’s economic or environmental consequences is its significance as a model for the federal government’s engagement with cities, an engagement that President Obama has insisted must be robust. Villaraigosa has very deliberately and very publicly campaigned for 30/10 (he has testified before congressional committees twice and visited DC to lobby for the plan on at least three other occasions), assiduously avoiding the accusation that he is simply looking to tuck the plan into an appropriations bill where no one would ever find it (it’s too big and too complex for that, anyway). He describes 30/10 as an investment that Los Angeles will repay to the federal government, emphasizing that Angelenos have done their part by passing the half-cent sales tax that will permit the City to pay the feds back in full.

The message is that the new era of partnership between the federal government and cities will often involve not only commitment from local governments but flexibility from Congress and the White House when policy innovation and progress demand action. (It is no surprise that the most sensible structure for funding 30/10 is an infrastructure bank that could provide a menu of different financing mechanisms.) In particular, it will involve Congress and the White House listening to city leaders and determining how, as Villaraigosa put it to me several months ago, “to leverage what cities are doing around the country.”

The White House Office of Urban Affairs, an innovation of the Obama administration, could be useful here, presenting and promoting ambitious but practicable urban programs to Congress and federal agencies. The good works of Transportation Secretary LaHood notwithstanding, there is simply no official elected or appointed who is institutionally capable of promoting transit and other policies that are good for cities generally. This is particularly true within Congress, which is dominated by non-urban politicians who almost by rule favor projects that benefit a small portion of the population.

The goal would be a federal government flexible enough to promote and facilitate replication of model local policies, thus avoiding some of the trickiest problems that arise when trying to come up with a one-size-fits-all federal urban agenda. This would work very well for transit, which would immediately benefit from a high-level champion who could lobby for the national importance of regional and local transportation alternatives. But it could also work for local environmental programs with high upfront costs that save money over the long term, local anti-homelessness and anti-poverty initiatives that address the needs of specific populations, and local efforts to preserve and construct affordable housing. This would happen alongside the more fundamental work that must be done to end the anti-urban bias that plagues federal and state policymaking in areas like transportation, housing, and the environment.

Some have pointed out 30/10’s warts, including the absence of funds for operating costs and the plan’s very ambition, which the Los Angeles County MTA calls “feasible, but aggressive.”

Such critics miss the point. 30/10 represents a paradigm shift in how we think about infrastructure investment, which we inevitably assume to be slow, expensive, incremental, and wasteful. Villaraigosa’s plan, in contrast, strives for speed, cost efficiency, and scale. It is exactly the type of project that the federal government needs to support if it hopes to reorient itself toward cities.

30/10 is an opportunity to debunk the myth of the inevitably wasteful infrastructure project and banish the dreadfully hackneyed phrase “bridge to nowhere” from political discourse.