KC Streetcar Sparks Half a Billion In Investment, But Is That Its Main Purpose? – Next City

KC Streetcar Sparks Half a Billion In Investment, But Is That Its Main Purpose? 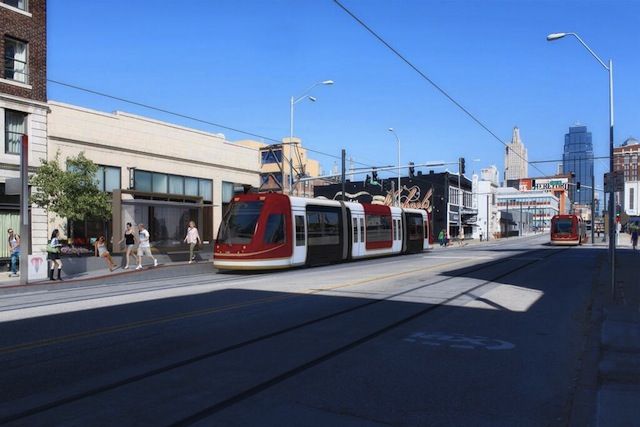 A rendering of the Kansas City streetcar. Credit: KCStreetCar

Kansas City’s $100 million streetcar is slated to start rolling in 2015, but developers are — as is their wont — already salivating. The Kansas City Downtown Council says that more than half a billion dollars’ worth of projects, from housing to retail, has been announced in the three years since streetcar discussions began.

The Kansas City Star on Friday offered some anecdotal evidence in the form of a $71 million apartment building, a new Vietnamese restaurant and other projects around the future streetcar line. By all accounts, developers are investing and injecting cash along the two-mile corridor.

This ties into how, exactly, city leaders view streetcars: Are they primarily meant to provide residents with a viable transit option, or to serve as magnets for investment?

Over in the Twin Cities, the Metropolitan Council feels that streetcars are such strong engines of economic development that they should get state funds earmarked for development, not transportation. The argument is that streetcars, with their limited, sometimes theme park-sized scope, aren’t really meant for transportation. Opponents call them gimmicks, not actual transit.

The Twin Cities light rail — which, it should be noted, is technically different than many streetcars and much more expansive — has been a reasonable success, even in its infancy. As we wrote last week:

There were 18 projects planned or started along the Green Line in the Twin Cities in 2012, costing a total of $275 million and boasting almost 2,300 housing units and more than 109,000 square feet of commercial and retail space. And that doesn’t even touch 2011, when 40 developments, estimated at $944 million, opened or broke ground.

It’s hard to look at those numbers and argue that transit-oriented development doesn’t spur growth and job creation.

But there are always doubters, and a 2010 study finds that the jury is still out on streetcars. “The literature regarding empirical measurement of actual changes in economic activity, such as changes in retail sales, visitors, or job growth, is almost nonexistent for streetcars,” the Transit Cooperative Research Program wrote.

Like all transit projects, streetcars are certain to spark debate. We can argue all day about their effectiveness and whether they actually promote economic development. But for transit-starved cities like Kansas City, two miles and a reported half-billion dollars in investment is a decent head start.