Japan Shows the Way to Affordable Megacities – Next City 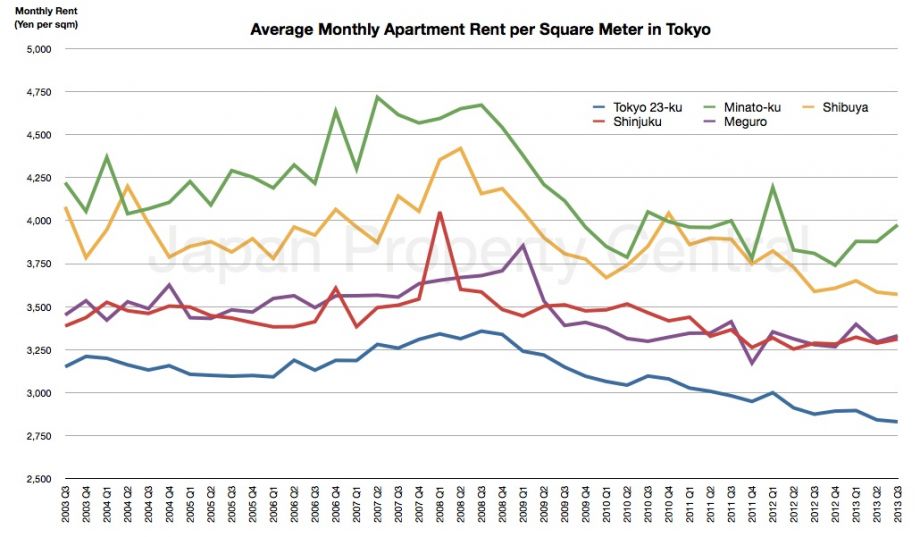 Japan’s housing markets can seem quite confusing to outsiders, and even many insiders. Massive vacancies in towns outside major urban areas — and even in quite a few neighborhoods near Tokyo — happen alongside booming markets in big-city downtowns, and sometimes abandonment and new construction coexist in the same place. Buyers in cities like London or New York may lust over 100-year-old townhouses, while in Japan, “second-hand” apartments and homes can have as much stigma as a pair of hand-me-down gloves. Regulations to preserve old neighborhoods is virtually unheard of.

“Even when the number of vacant homes is on the rise, more and more new homes are being built,” one Japanese housing researcher told Bloomberg News last year. “It’s absurd.” But could it be that far from absurd, Japan’s housing markets are actually isles of rationality in a sea of overregulated, overpriced first-world megacities?

Japanese cities have for centuries taken a much more laissez-faire approach to development than their counterparts in the West. Building regulation in London started in earnest after the Great Fire of 1666, with the city moving away from flammable wood buildings to sturdier stone and brick, and giving authorities the power to widen streets to act as firebreaks. Manhattan was gridded in 1811 and wood-frame construction was banned in 1815. Paris cut wide avenues through its dense, medieval city center under the direction of Baron Haussmann in the mid-19th century.

Aside from isolated projects here and there, city planning did not begin in Japan in earnest until 1919. Even today, zoning standards are very lax compared to cities in the Americas and Europe. The construction-loving Japanese central government generally runs the show when it comes to land use regulation, with more change-averse localities sidelined in the name of economic development. (Just this week, a new round of zoning deregulation was announced.) Skyscrapers are relatively rare in Japanese cities — though this has been changing gradually over the past half-century — since building height depends on street width, and streets tend to be very narrow. Development in Tokyo, Osaka and other large cities in the Tokaido megalopolis is still much easier than in peer cities in the West like Paris, London, New York and San Francisco.

As a result of lax development rules, Tokyo — whose greater metropolitan area has surpassed 35 million inhabitants, putting to shame piddling two-bit towns like Mexico City, Delhi and Jakarta — is still growing at a rapid clip, despite the fact that Japan as a whole hit its population peak in 2008. (Rural areas and second-tier cities, and even some neighborhoods in first-tier ones, are emptying out as young people flee to large cities for better economic opportunities.)

The number of apartments and houses in the metropolitan-prefecture of Tokyo — whose population is a bit more than 13 million, compared to New York City’s 8.3 million — rose, on average, by 1.95 percent a year between 1998 and 2008, or more than twice as fast as its three world city competitors. (London’s housing stock grew by 0.82 percent annually around the same period, while the number of homes in New York’s five boroughs, as well as Paris and its inner suburbs, inched up just half a percentage point.)

What is Japan’s reward for allowing its largest cities’ housing supplies to keep up with demand? As your economics 101 professor could probably guess, relatively cheap housing.

A report released by Demographia — headed up by anti-urbanist Wendell Cox, but nevertheless a good source of data — found that Japanese cities were the most affordable of the markets studied, which were limited to the Anglosphere. That is, Australia, Canada, Hong Kong, Ireland, New Zealand, Singapore, the U.K. and the U.S., plus Japan.

By using the “Median Multiple,” a measure that divides the median price of housing by the median household income (though averages were used for Japan due to the paucity of median housing price data), Cox and his researchers conclude that “Housing is seriously unaffordable in Tokyo-Yokohama, with a 4.4 Average Multiple (average house price divided by average household income). Osaka-Kobe-Kyoto has an Average Multiple of 3.5 and is thus rated as moderately unaffordable. Despite these ratings, Japan has the most affordable housing of any megacities (over 10,000,000 residents) in the Demographia Survey.”

The median price for a home in Tokyo and its surrounding three prefectures is 28 million yen, or around $270,000. With a price-to-income ratio (Median Multiple) of 4.4, it’s about as costly as Calgary, Nottingham or Sacramento. The greater Osaka area’s average home is just $180,000, giving it a Median Multiple of 3.5 and putting it in the same league as Chicago or Raleigh.

As construction in Tokyo continues to outpace population growth, prices are also falling, according to data compiled by Japan Property Central. Average monthly rents per square meter in Tokyo have fallen by about 250 yen, or about $2.40, over the past 10 years. That means the monthly rent on a 1,000-square-foot apartment would be more than $200 cheaper in 2013 than it was in 2003. (Overall price levels in Japan are about the same as they were 2003, with periods of deflation canceling out those of inflation.)

Absolute prices for apartments are also falling, but not as fast as prices per square meter, suggesting that Tokyo apartment buyers take their savings and plow them back into larger units.

Japan’s building regulations definitely have their critics. Chief among them is André Sorensen, who has done the most comprehensive English-language work on Japanese land use. He argues that the centralized nature of Japanese land use policy, originating at the national level and implemented often over the objections of local governments, is fundamentally anti-democratic and has deleterious consequences for, among other things, quality-of-life and the environment. (Given Japan’s density and low rates of car use, however, it wouldn’t be hard to make the case that the central government’s lax development attitudes have actually benefitted the earth).

For all its faults, Japan’s top-heavy, pro-development style of land use regulation has produced a remarkable urban structure, making Tokyo the undeniable king of the megacities, while avoiding the profound unaffordability of Hong Kong, Vancouver, New York and London.