Here’s How to Celebrate Jane Jacobs’ 100th Birthday – Next City 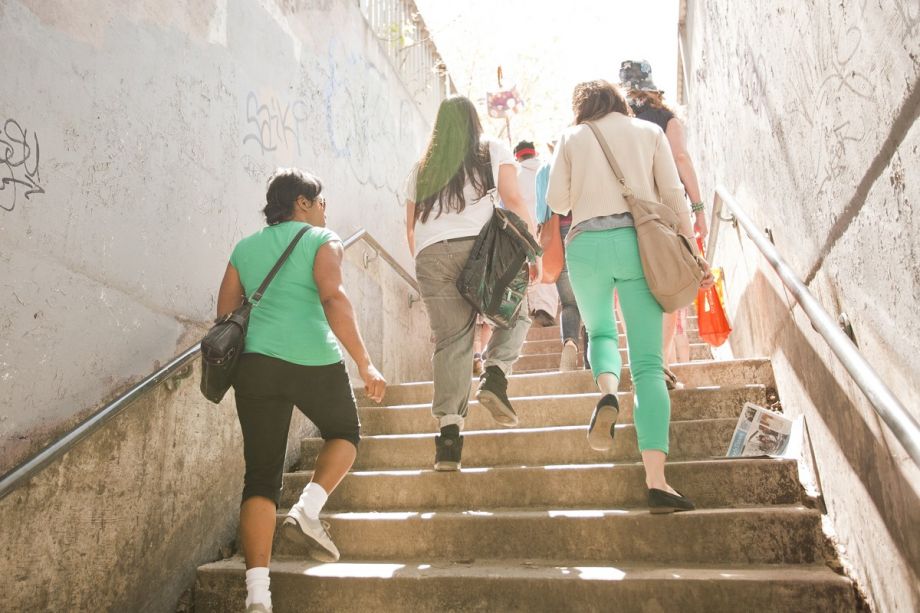 Remembering Jane Jacobs poses a problem — and the celebrated writer, who would have turned 100 years old this year, deserves our remembrance. She upended the fields of city planning and architecture with her 1961 book, The Death and Life of Great American Cities. In a 2009 Planetizen poll, she was voted the most influential urban thinker of all time. But how do you tell the definitive story of a person who despised dogma? Or build a great monument to a champion of humble, fine-grain, ever-changing urbanism? How do you lay exclusive claim to the legacy of a woman who wrote, in that almost Lincolnian phrasing, that “Cities have the capability of providing something for everybody, only because, and only when, they are created by everybody”?

In 2007, a year after Jacobs died, some of her close friends in Toronto took a crack at creating a fitting homage — a living, breathing, walking, talking memorial called Jane’s Walk. Held annually on the first weekend of May (close to Jacobs’ birthday), Jane’s Walk is a festival of free walking tours led by locals. That year, Toronto hosted 27 walks that focused on a variety of topics. Aside from those slim details, however, “the origin story for Jane’s Walk is shrouded in a bit of mystery,” says Denise Pinto, the organization’s executive director. As though the founders had taken a vow of silence, when asked about it “their eyebrows raise or they give you a smirk.”

None of them claims sole responsibility for the idea.

The following year, Jane’s Walk expanded to New York, and it has kept growing since. In 2015, it boasted 1,300 walks in 189 cities, spanning every habitable continent. “It was an idea that took off and became a global movement,” says Pinto. “But there wasn’t a real owner through that process, there wasn’t a single champion. It was built by all of us, and that’s powerful too.”

Jane’s Walk embodies Jacobs’ organic, democratic ideals by providing an open-ended platform. Anyone can lead a walk about nearly anything. For this year’s festival in Toronto, walk leaders have already submitted tours about skateboarding, secret staircases, ghost stories, community organizing, queer history, preservation, urban birding and labyrinths. This is what Jacobs called “self-organization” — the capacity of decentralized actors to organize themselves into something greater than the sum of their parts without any direction from above. Neither the Jane’s Walk head office nor the local city organizers act as any kind of central command, and the range and creativity of the walks reflect this laissez-faire approach. No one curates the content, per se. No one tells the walk leaders what to do, or even to do it in the first place. The organizers simply provide an online platform, a dollop of encouragement, a dash of technical support and then watch the event invent itself.

A design student leads a walk in Toronto focused on how convenience stores act as a microcosm for each neighborhood they reside in. (Credit: Jane's Walk)

This principle of self-organization operates at every level of the festival. Not only does the content reflect the whims of walk leaders, but the way each walk plays out is equally unpredictable. For Josh Fullan, a teacher at University of Toronto Schools, organizing a youth edition of the festival was the “gateway drug” that got him hooked on urbanism. It inspired him to develop an entire curriculum on city building called Maximum City, which has become a compulsory course for grade eight students at UTS and is being adopted by teachers around Ontario. As Pinto puts it, “People—when you give them a chance to come together—are going to do that good work on their own.”

Pinto tells another story about a walk from last year called Cosmopolis Toronto. Led by a photographer who aimed to take a photo of one Torontonian from every country in the world, walk participants got to chat with a handful of the subjects in his series. By sheer coincidence, a woman who had moved to the city a day earlier from Latin America stumbled upon the walk in progress. She was still getting her bearings in the city, feeling “discombobulated and a little disoriented and a little alienated,” but she told the crowd her story. As many dried their eyes, she concluded, “This really made me feel like I’ve come to the right place, and I’ve found other people who have had experiences like me. I’m not alone, and I’m going to be able to make a home here.”

The event’s growth from a one-time event to a global nonprofit has been almost entirely self-propelled too. The number of walks has grown about 50 times since its founding, with almost no concerted marketing effort to recruit new cities. Exactly how this word of mouth dynamic operates has been tough to pin down, but Nadia Halim, the global cities coordinator for Jane’s Walk, has a hypothesis: “Often it’s someone who is living in Canada for a while or visits Canada, goes on a Jane’s Walk, gets involved here, goes back to wherever they come from, and says, ‘It would be great if I could get this started here!’” At least, she tells me, that’s how the story played out over the past few years in Vienna, Austria, Belfast, Ireland and Cluj-Napoca, Romania, to name a few.

The formal organization is now working hard to catch up with the movement. “In a way, it’s a little backwards,” says Pinto about their current strategic planning process, “because most organizations go through this in the early days of their work. But Jane’s Walk is a grassroots movement that expanded faster than its stewards. There was no capacity for forecasting, just the beautiful problem of keeping up with the appetite of organizers around the world.”

Jane's Walk participants walk through Toronto's Chinatown as they learn about the history of women's labor movements in the city. (Credit: Jane's Walk)

While they move forward with this year’s festivities, they are also tracing the genealogy of their own impact — investigating what makes a successful tour and how to hitch storytelling to action, attempting to track and support some of the “good work” that comes out of walks, and better connecting their growing global network of walk leaders.

As a tribute to Jane Jacobs, it’s fitting that Jane’s Walk has outgrown its origins as a memorial and taken on a life of its own. In the early days, people came to walks because they knew about Jane Jacobs, but increasingly, Pinto says, “people come to Jane’s Walk because they recognize it as a community walking project in their corner of the world, and then they find out about Jane.”

Perhaps, then, the best way to remember Jane Jacobs isn’t to follow her writing as holy scripture or dwell on the question, “What Would Jane Jacobs Do?” It’s to go on without her — to get out on the street, talk to each other, and hash out new ways to live together in these dense, wondrous, unwieldy and unfair places we call cities.

You can lead or attend a Jane’s Walk this year on May 6-8 in a city near you.

Nate Storring is a writer with Project for Public Spaces and a curator with a focus on interpreting architecture, city planning and other urban topics for the general public. His book, Vital Little Plans: The Short Works of Jane Jacobs, will be available on October 11, 2016.