INTERVIEW: Rob Stephenson on Capturing the Farms of New York City – Next City 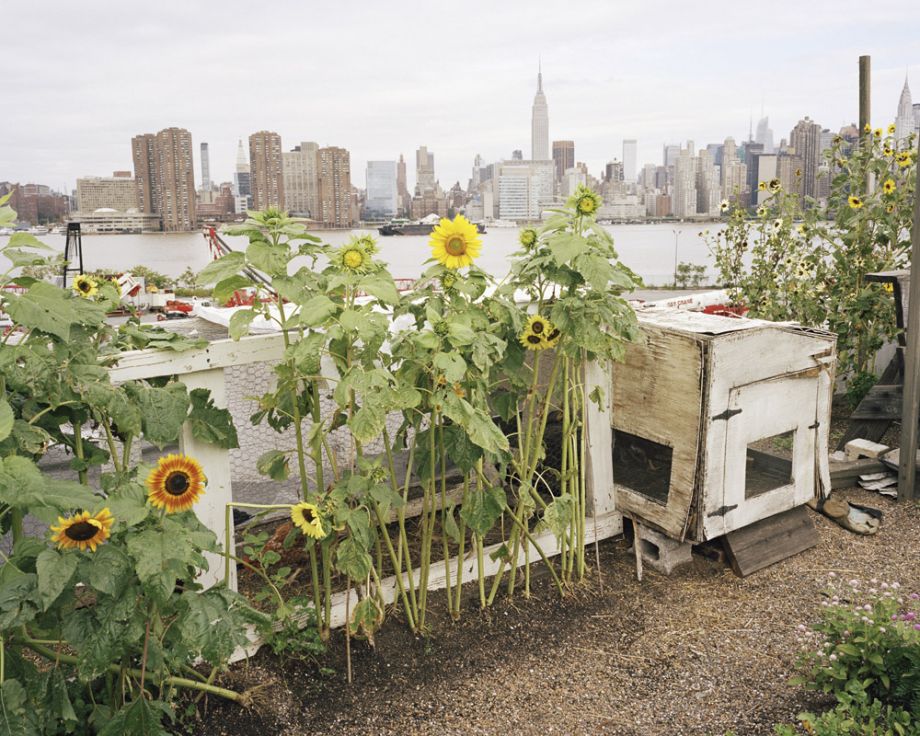 New York photographer Rob Stephenson spent last year documenting farms in New York City. Whether on a Manhattan rooftop or in an abandoned lot in the Bronx, these experiments in urban agriculture hold the power to change the way the city feeds itself. His lush, large-format photographs tell the story of this growing movement to farm the five boroughs. We interviewed Stephenson about his series, From Roof to Table,which is now on display at The Storefront for Urban Innovation.

Next American City: What inspired you to create this series?

Stephenson: I received a fellowship from the Design Trust for Public Space. They are currently working on The Five Borough Farm initiative examining urban agriculture in the New York City and the work produced during my fellowship was meant in part to supplement that project.

NAC: How did you select sites to photograph?

Stephenson: I spent hours researching possible gardens and farms in the city using google maps. Most of the work was shot on an 8×10 camera and, combined with the tripod and film holders, the setup weighs around 30 pounds. Having a good idea of where I was going to shoot beforehand was really important.

I primarily sought out sites that could contextualize these growing spaces as uniquely urban. There’s a a similar quality to many of the gardens when you’re inside them, little to differentiate them from a suburban or rural vegetable garden, so I thought it was important to find sites that emphasized the urban-ness of the landscape

NAC: What did you learn about urban agriculture through doing this project?

Stephenson: I was amazed by the amount and diversity of food that people are able to grow in such a seemingly inhospitable environment. From stalks of corn in a Bed-Stuy lot and rooftop bee hives in the shadow of the Chrysler building to watermelons and tanks of tilapia in Far Rockaway, Queens, everything that can be grown in the city is being grown. It was also interesting to see how traditional practices have been adapted to succeed in the urban environment. Raised planters on lead contaminated lots, kiddie pools used to lessen the load on rooftops and a moveable 15,000 square foot farm comprised entirely of milk crates are all innovative approaches to dealing with less than ideal growing conditions.

NAC: Was there anything you witnessed while shooting that was particularly moving to you?

Stephenson: One day I went to photograph a new greenhouse project that I had read about in an outer neighborhood of Brooklyn. I asked a man sitting on the stoop across the street if I could get up on the roof of his building to get an elevated view of the greenhouse, which he was happy to let me do. After taking a couple unremarkable pictures of the greenhouse, I got ready to go back inside and he mentioned that his wife had a vegetable garden in the back. When I looked over the other side of the house, I was amazed to see that practically all the back gardens of the adjacent row houses had gardens overflowing with tomatoes and melons and zucchini. The neighborhood was actively engaged in “urban agriculture” though they probably just called it growing food. With the proliferation of rooftop farms and the local food movement there has been lots of media attention paid to urban agriculture recently, but people have always been finding ways to grow their own food in the city.

NAC: Where do you think the urban agriculture movement will be 20 years from now?

Stephenson: There has been a growing recognition of the many benefits that community agriculture provides, which go well beyond basic food production. Hopefully state and local policy will reflect this and be more focused on supporting and encouraging local gardens and farms. I imagine rooftop farming will be where most of the the innovation and expansion in urban agriculture will take place. With large scale rooftop farms starting to demonstrate that they can actually be profitable, there should be an increasing interest in turning the vast untapped acreage above our heads into viable growing spaces. Farms will most likely increase in size and high yield practices like hydroponics will be more widely implemented.