Harriet Tregoning Looks Back on Planning for D.C.‘s Breakneck Growth – Next City

Harriet Tregoning Looks Back on Planning for D.C.‘s Breakneck Growth 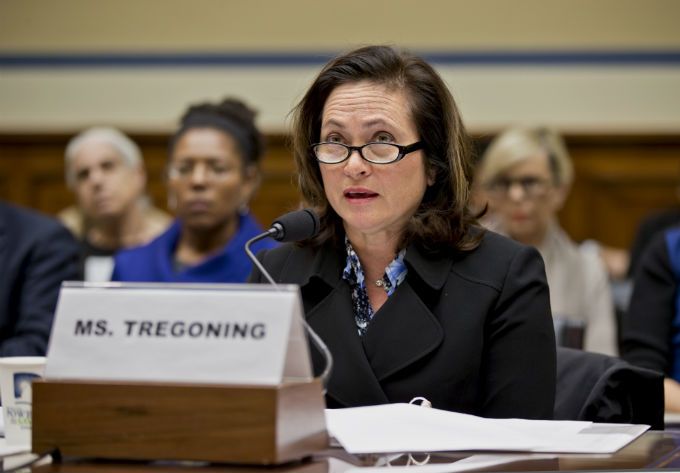 Last week, news broke that Washington, D.C.’s chief city planner since 2007, Harriet Tregoning, was leaving the position to oversee the Office of Sustainable Housing and Communities at the U.S. Department of Housing and Urban Development. Tregoning presided over a period of torrential growth for the District after decades of decline, and wasn’t afraid to stake out longshot positions on planning issues like minimum parking requirements and the federal Height Act.

We caught up with Tregoning earlier this week to talk about her tenure in D.C., what she plans to tackle at HUD, and her views on U.S. cities writ large.

Next City: During your tenure there was a lot of redevelopment in the NoMa neighborhood and on the waterfront. Where do you see the next 10 years going, and what do you think is the next NoMa?

Harriet Tregoning: I think Anacostia, Congress Heights, Deanwood — those places are going to be opened up both by the fact that they’re terrific neighborhoods that are not nearly as well known as they deserve to be.

NC: What’s it like planning a city under such a strict height limit?

Tregoning: It hadn’t ever come up until recently, because for five decades or more we’d been a shrinking city, not a growing city. From the time we got home rule in the ’70s, we were managing a city that was getting smaller every year. This is a relatively recent phenomenon, and the idea of being constrained by height limits wasn’t even part of the discussion. Now our relatively torrid rate of [population] growth — more than 2 percent a year, 1,100 people a month — is causing the dialog to change. Even then, plenty of other places around the world accommodate much larger populations in the same kind of geography without having tall buildings. I think the dialog in our city will be, how do we want to accommodate such growth? What kind of neighborhood change are we willing to tolerate? And how will that dictate where in the city growth will go?

NC: When you go through Paris, it’s mostly mid-rise buildings. Whereas in D.C., once you leave downtown, it drops off to two and three stories. Do you think people will have to ask themselves, do you want to redevelop these old neighborhoods like Capitol Hill, or do you build taller elsewhere?

Tregoning: Those are choices that any city would at least want to have. The starting point will be asking every neighborhood, “here’s the growth coming to the city, here’s what we project over the next 30 years. This is what your share of that growth looks like. How would you most like to accommodate that growth in your neighborhood?” I think the easy answer is, “I know, let’s grow in that neighborhood over there! They need some growth, but our neighborhood, we’re good.” The question is going to be, how to have a dialog where people really have to consider real choices about how that growth will be accommodated?

NC: What would you consider to be your biggest success as planning director?

Tregoning: I wouldn’t call it a success exactly, but I’d never been in a municipal planning office before, so I had the benefit of not knowing what I didn’t know. I didn’t really know how one goes about doing this job, and I thought that I was responsible for almost every outcome in the city. As planning director, I thought I should care about crime, transportation, population growth, health outcomes and many, many more things. I had a very broad perspective on what planning should do, and what it should be involved in. And I acted based on that assumption. From what I now understand, that isn’t necessarily how planning directors behave either in this city or in others. But it’s helpful to work with your colleagues all across city government, because all of these things affect the quality of the city that you live in, and it affects who is going to live in this city in the future.

NC: What about your biggest regret?

Tregoning: We’d been planning for growth for decades at some level, but now that we’ve actually got it, and at such a rapid pace, we’re definitely experiencing a lot of growing pains. I think doing more to bring longtime residents and newcomers together, doing more to put in place activities and ways of working at the neighborhood scale to make improvements — that’s something that would’ve been great to have had in place at the very beginning.

NC: Which do you see as the most sustainable path to long-term affordability?

Tregoning: This gets to something I hope to work on a little bit at HUD. I think the challenge for American cities for the next decade or more is indeed affordability, but it’s not just about housing. One of the scariest statistics I’ve heard recently is that we’ve lost 8 million jobs in the recession, and just at the end of 2013, we replaced the last of those 8 million jobs. But the average wage of the jobs lost was $24 an hour, and the average wage of those gained was $11 an hour. As I look even in my region, I see that writ large in our economy, the high-end jobs are growing gangbusters, the retail service and hospitality jobs also see a very healthy growth. But the middle-wage jobs are declining. Or if they’re growing, they’re growing at a much slower rate than the other categories.

NC: When I was in D.C., I noticed the decline in Metrorail. The headways are getting longer, and on the weekends it’s become almost a commuter rail system rather than rapid transit.

Tregoning: Let’s keep in mind a couple of things. More than ever, we recognize the value that Metro provides to the region. It’s indispensable. We couldn’t have bike share if we didn’t have the Metro system. The streetcar wouldn’t work if we didn’t have the Metro system. All these other transportation innovations in the District wouldn’t be possible without a high-capacity, heavy rail system that can move a lot of people. To give you an example of how important it is, more than 84 percent of the commercial construction going on in our whole region right now is within a quarter-mile of a Metro station.

We’re one of the few, maybe the only, major transit system in the country that doesn’t have a dedicated source of revenue. Every year, we deal with budget struggles to come up with our share for Metro, and during the lean years we were constantly chiseling away at the Metro budget, trying to get away with not funding the maintenance and capital investment that was really necessary. Now we’re actually at a phase where we’re looking at considerable expansion of Metro. The Silver Line is getting ready to open, the Purple Line is coming, there’s a plan to bring Metro up to a state of good repair, and then look to 2040 and beyond at expansion. Some of our jurisdictions, maybe the District, have a real appetite to look at enhancing the Metro service within the District of Columbia — more frequent service, longer hours — because we have an increasingly transit-engaged population.

NC: There’s been a debate among transit advocates about streetcars: Do you put them in their own lanes, or not. Where do you stand on that issue?

Tregoning: We didn’t have, for the most part, dedicated transit lanes for the hundred miles of streetcar that we had in the city [in the past] —

NC: Although we also didn’t have many cars, right?

Tregoning: Well, we had some cars, and the last streetcar operated in 1962. So cars were around for a good 40 years before that. Sure, it would be great to have dedicated lanes for transit, especially high-frequency, high-capacity transit, and our streetcar — including that H Street line — will [eventually] run in parts of the city in a dedicated lane. In other parts, not. The great thing is that as we build the system out, even on our first full east-west line, we’ll have service in both conditions, and we’ll be able to see how it works, what’s the relative level of service and what are the issues when it runs in a dedicated space and when it does not.

NC: The Rosslyn-Ballston corridor in Virginia has been extremely successful as it’s been retrofitted from a suburban to an urban area. Do you think the Silver Line is going to see the same success?

Tregoning: I will say that it’s already been a success in that it took a place that was literally on the covers of books as the poster child for sprawl, and caused it to be reimaged as a dense, mixed-use, transit-served neighborhood, and one that already has the benefit of being one of the largest employment centers in the country. That’s a huge advantage. It’s already changed the conversation. We have more urbanizing suburban development here in the Washington area than in any place in the country. When Tysons Corner decided to do this, when Fairfax County decided to do this, it tipped the balance for a lot of other places.

NC: I read recently that in Tysons, some apartment developers have decided that the market, at least for the moment, is saturated. In D.C. you see the same thing with prices stabilizing. Obviously developers are not happy about this, but do you see that as a success for affordability, once market-rate construction reaches a point where prices are no longer rising?

Tregoning: I would say it’s a temporary phenomenon, and that real estate is cyclical. In the District, in particular, there’s a long lead time. So yes, if you’re a renter looking to sign a lease, I would say lock in! Get several years at that rent, if you can possibly do it, because the pipeline is emptying out, and when it does, if we’re still continuing to grow at the same pace, that’s going to put pressure on prices again, and it’s going to be a couple of years before the pipeline fills with development projects again to the same extent. Those are years when prices and rents will rapidly rise.

NC: Real estate, like so many things in this country, is a male-dominated field, but it seems like we’re increasingly reaching gender parity in urban planning. You were in D.C., Amanda Burden was until recently in New York, Jen Keesmaat is in Toronto. What do you attribute this gender parity to?

Tregoning: Oh my gosh, I’ve never given it a single thought! I still find in real estate in general that there are many more men than there are women, although there are significant and growing numbers of women in real estate overall. I’ve always thought of planning as a profession that had a lot of women in it, and that’s certainly been my experience in my office. My two deputies are women, my immediate predecessor was a woman.