In Peoria, Green Infrastructure As a Path to Social Equity – Next City

In Peoria, Green Infrastructure As a Path to Social Equity 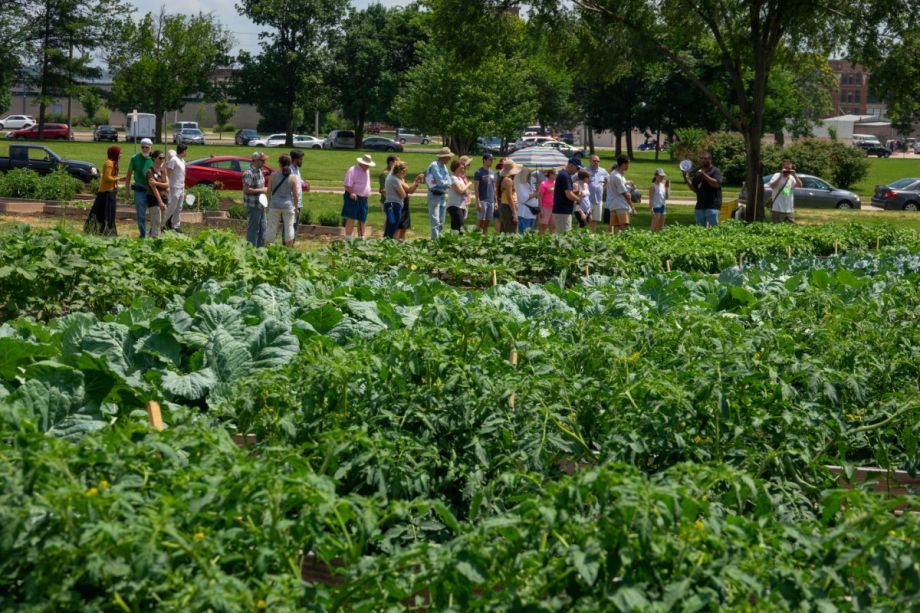 A site tour of Well Farm takes in the extensive raised garden beds which are an integral part of its innovative stormwater management program.(Credit: Greenprint Partners)

In the summer of 2018, one of the country’s first stormwater farms opened in Peoria, Illinois. It was complete with 126 hybrid poplar trees, a 3,000-square-foot floriculture space and 100 agricultural planter beds — all designed to capture water runoff from a 1.55-acre area, to prevent an estimated 1.3 million gallons of stormwater from entering the city’s combined sewer system each year.

This year, a rainy spring put the farm to the test. About 14 inches fell between May and July, in amounts that would typically overflow the combined sewer system. Piping diverted about 1.1 million gallons of rainwater to the farm, which soaked up 98 percent. That result was, as Peoria civil engineer Jane Gerdes told a local news outlet, “pretty phenomenal.”

This farm, known as the Well Farm at Voris Field, is an important pilot project for Peoria. For several years the city has sought approval from the Environmental Protection Agency for its first-in-the-nation green solution to its longstanding combined sewer overflow challenges. Though federal approval is yet to come, early efforts at installing green infrastructure show the city is on the right track.

Peoria’s efforts are to come into compliance with the Clean Water Act. Though it was passed decades ago, in 1972, cities across the country still grapple to address combined sewer systems, which contribute to water pollution in nearby streams, rivers and other bodies of water. According to the EPA, combined sewers are a priority water pollution concern for nearly 860 U.S. municipalities.

A combined sewer system collects rainwater runoff, sewage and industrial wastewater into one pipe. Under normal circumstances, it transports wastewater to a sewage treatment plant for treatment. But when sheer volume overwhelms the system, as in cases of flooding, untreated stormwater and wastewater overflow into bodies of water — in Peoria’s case, the Illinois River.

The current problem will only worsen as climate change increases rainfall and further stresses these outdated systems, according to the EPA.

Gerdes, with the Public Works Department, started studying the potential of water retention using rain gardens, rain barrels, bioswales and other devices. In 2014, a Bloomberg Philanthropies grant established an “innovation team” at the city with Corso at the helm, who delved into co-benefits and economic opportunities of a predominantly green infrastructure plan. The city submitted a detailed plan to the EPA in 2015.

The major challenge that emerged, according to Corso, is the EPA “needs to affirm that they believe this plan is doing what needs to be done” to address water pollution. Hence, the importance of the city’s early pilots, which have spurred community outreach, education, solutions brainstorming and heavy research.

Early on, the city identified opportunities to integrate equity into its plan. Most of Peoria’s combined sewer system is located in the historically disinvested South Side, which has high levels of chronic disease and unemployment.

The first city pilot was to install “complete green streets” on two blocks of the South Side. The goal wasn’t only to design safer, more pedestrian-friendly streets with improved accessibility and increased bicycle facilities, but to integrate “zero runoff streetscapes” that absorbed rainfall. It’s become a primary strategy of the green infrastructure plan, with a goal to integrate more zero runoff streetscapes across eight square miles of the city.

The city framed the pilot — which launched in the fall of 2017 — as a community-building initiative, with a street festival ribbon-cutting that brought 1,500 people to the neighborhood. “That’s not usually what you see with a ribbon-cutting for a piece of infrastructure,” Corso says. “There’s a perception of our urban core being a deterrent to people re-engaging and re-investing — and we saw [that] this shifted the perception of the older, disinvested parts of the city for a lot of people.”

For another pilot, the city launched PeoriaCorps, a paid, pre-apprentice program offering young adults between 18 and 24 training and hands-on experience in green infrastructure. “The combined sewer area of the city had as many as 5,000 opportunity youth — 16- to 24-year-olds who have been out of school and out of work for at least six months,” Corso says. “We wanted to award opportunities to youth living in these neighborhoods, so they could be part of the solution.”

The city also realizes it will need a new workforce to roll out, manage and upkeep its nontraditional infrastructure program, and PeoriaCorps is establishing that framework. More than 20 youth participated since its launch in October 2017 and the fourth cohort kicked off this fall.

Another pilot — and the one that has earned the most attention — is the Well Farm at Voris Field, also on the South Side. The city partnered with Greenprint Partners, a green infrastructure “delivery partner,” to transform a vacant city-owned lot into a lush garden that captures stormwater runoff while growing harvestable timber and vegetables. An impact report by Earth Economics found the farm’s generated $2.8 million dollars in economic output in the county, 29 full-time equivalent jobs,and $1.5 dollars in economic activity in the county for every $1 invested.

On top of a successful season harvesting rain, the farm received a number of awards this year, including the U.S. Water Alliance U.S. Water Prize acknowledging the success of the “community benefits-driven design process.”

Over the years, the city has fine-tuned its public engagement process around green infrastructure and tested the most effective plants and soils for future installations. “Public Works is already taking lessons learned from these early projects and integrating them into other work,” Corso says; one example is integrating bioswales into reconstructed roadways. Peoria also implemented a stormwater utility fee last year to create a funding stream for its backlog of stormwater-related projects.

At a local level, formalizing this plan with the EPA will help the city avoid penalties for water pollution. On a larger scale, Peoria wants to show that the “paradigm shift” from gray to green infrastructure is not only effective but provides opportunities for equity and resiliency, says Corso. Because of experimentation and successes from the pilots, he adds, “We’ll have a pretty holistic approach of managing stormwater and also improving quality of life.”