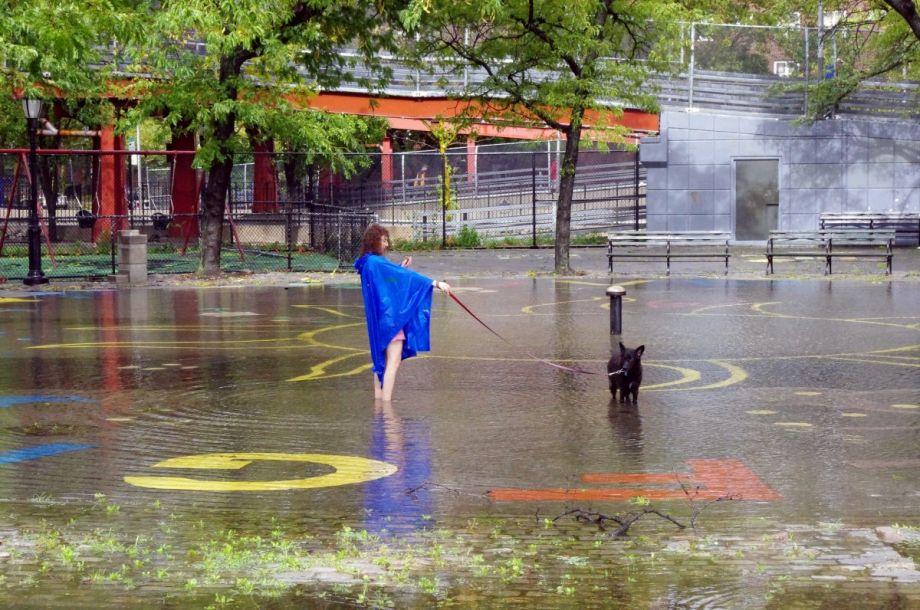 A woman walks her dog in the aftermath of Hurricane Irene, in 2011. Cities can expect to see more powerful storms and more frequent flooding. (Photo by David Shankbone / CC BY 2.0)

As the planet warms, American coastal cities face more intense storms and steadily rising sea levels. For some, geography is kind; land lost to storms and sea level rise is likely to be minimal. For others, the critical mass of the city is at risk of periodic flooding from storm surges followed by gradual, permanent inundation by a rising sea.

Cities, however, can’t respond to this crisis on their own. The federal government needs to make sure that programs it manages, like flood insurance and disaster assistance, are not making matters worse and take steps to help cities develop effective response strategies.

Coastal cities have always faced flood risks from major storms. These storms kill hundreds and destroy homes, businesses, and communities. In 2017, Hurricanes Harvey, Irma, and Maria caused over 3,000 deaths and generated some $265 billion in damages. The following year, Hurricanes Michael and Florence killed over 100 and caused $50 billion in damages. Much of this destruction was a result of storm surges. These storm surges vary in height depending on the storm but can be significant. For example, storm surges in New York during Hurricane Sandy approached 10 feet.

Historically, the damage from coastal storms was limited in scope and the flood water slowly drained away as storms passed. But a warmer climate means melting glaciers and ice sheets, which is causing sea level to rise at an accelerating rate. Unlike storm flooding, the coastal flooding that comes with rising sea level occurs everywhere and comes to stay. Global sea level is likely to rise between 2 and 4 feet by 2100 and could rise by as much as 8 feet in a worst-case scenario. And sea levels will keep rising for several centuries after 2100, with as much as 30 feet possible by 2200.

Cities around the country are responding to the challenges of coastal storms and rising seas. Some are simply assessing the risks and engaging the public. Several cities, such as Boston, have benefitted from “design challenges” in which teams of experts outline innovative approaches to managing flood risks. Others, including Galveston and Charleston, have constructed major coastal protection structures such as seawalls. Still others, notably New York City, are employing regulatory or financial tools including buyouts of property at risk.

The federal government has a critical role to play in helping cities manage future flood challenges. Until recently, federal agencies were reliable partners providing communities the most current science on storms and rising seas. They need to return to that job. Major national programs such as the flood insurance and disaster assistance programs, need to be modernized to account for new understanding of coastal risks. Federal agencies also need to coordinate among states and communities and manage critical infrastructure assets and ecological resources. And, the federal government can provide financial support needed to advance this work.

As a first step, the federal government needs to help cities steer new development away from risky places. The population living in risky coastal areas is expected to double by 2060, making the coastal flood problem more difficult and expensive. Making information about flood risks widely available would slow this growth. The federal government should improve public understanding of flooding by adopting a national standard for disclosure of flood and sea level rise risk at the time of sale of a property. In addition, the federal flood insurance program should take the bold step of declining to provide insurance for new development in coastal areas likely to be inundated by rising seas.

Cities are making progress in planning for coastal storms and rising seas; federal financial support for this work would assure more consistent progress around the country. The federal government needs to make grants to both states and large cities to support planning for storms and rising seas and implementation of response actions. Cities need to be able to tailor plans to local conditions but the federal government can promote best practices, like engagement of low-income communities and communities of color and cooperation with neighboring jurisdictions.

Finally, coastal homeowners need help to avoid devastating financial losses as growing flood risks drive down property values. Cities can afford to buy out some property owners, but in most cases they do not have the resources to acquire the many properties that are at risk. The federal government is best equipped to assist homeowners by, for example, buying risky property well ahead of rising sea levels. Current owners could stay until the property becomes unsafe, paying rent but not flood insurance premiums. The federal government would pay local property taxes.

A critical choice that cities face in addressing coastal flood risk is whether to build engineered protection structures like seawalls or to step back from areas at risk of flooding. The federal government needs to participate in these decisions.

Powerful storms and rising seas are not only a threat to cities and other communities. Also in the crosshairs are critical infrastructure, such as military bases, transportation assets, and water treatment facilities. The federal government needs to work with state and local governments to protect or relocate those facilities. In addition, ecosystems, such as beaches and coastal wetlands, need space to migrate landward as seas rise. The federal government, along with cities and states, must figure out how best to coordinate coastal flood plans developed by cities with larger scale efforts to protect critical infrastructure and ecological resources along the coast.

America’s large coastal cities have a lot at stake as they develop strategies to respond to coastal storms and rising seas. The federal government needs to do more to support this important work.

Jeff Peterson worked at the Environmental Protection Agency, U.S. Senate Committee on Environment and Public Works, and White House Council on Environmental Quality and is author of A New Coast: Strategies for Responding to Devastating Storms and Rising Seas (Island Press, November 2019).