How the California Drought Affects the Food on Your Plate 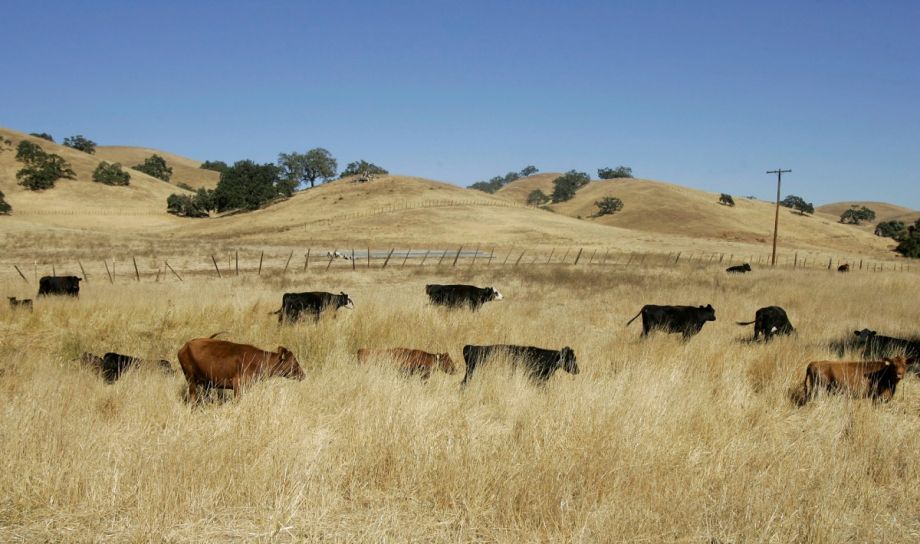 Despite some rain and snow in recent weeks, the drought in California is dragging on with no end in sight. And it is hitting the state’s vital agricultural sector in increasingly tangible ways.

The most immediate threat is to a fairly rarefied product: grass-fed beef. With grass practically nonexistent in the state’s parched ranchland, California cattle farmers have resorted to extreme measures. Some turn to grain to feed their animals, and label the resulting meat accordingly. Others truck in hay, or even send their cattle to feeding grounds thousands of miles away. Some herds have been drastically culled. Nationally, cattle herds are at their lowest levels since 1951.

“There’s just no grass on the fields,” Mike Gale of Marin County’s Chileno Valley Ranch told the Los Angeles Times this week. “We haven’t had grass since last May. Usually at this time of year our grass is knee-high or 18 inches. The cattle are just wallowing in it. But even with the rain we got last month, we’ve got no grass, the seeds just never germinated… This has been a very unusual experience. Nobody has ever gone through something like this before.”

Another grass-based rancher said, “[T]he big question is, ‘Is this the new normal?’”

It’s not just specialized products like grass-fed beef that are at risk. According to the energy industry publication E&E, the lack of rainfall, coupled with California’s decision at the end of January to eliminate water deliveries under the State Water Project, will result in as much as half a million acres of land left fallow. That will mean higher prices for everything from tomatoes to milk.

Many farmers are making the choice to water tree crops, such as nuts, rather than annuals, such as lettuce, in order to sustain the plants that take years to become productive. But even precious nut trees are falling victim to dry conditions, with some farmers ripping out as much as 20 percent of almond trees still bearing crops.

Drought is also devastating farmers half a world away. In Australia, the world’s third-largest beef exporter, dry weather has been going on for two years, devastating the cattle industry in the eastern half of the country. Slaughterhouses are at capacity and farmers are forced to wait as much as three months to cull their herds, as millions of cattle have been killed due to a lack of grass and the rising cost of grain needed to feed them. Seventy percent of Queensland, a primary cattle-raising region, is in drought, and last year was Australia’s hottest on record. Little relief is in sight.

“The ground has been turned into a moonscape with grass reduced to patches of black stubble,” one Queensland rancher told the Financial Times, sounding very much like his counterparts in the western United States.