How New Orleans Is Adding Art to Resilience Planning – Next City

How New Orleans Is Adding Art to Resilience Planning 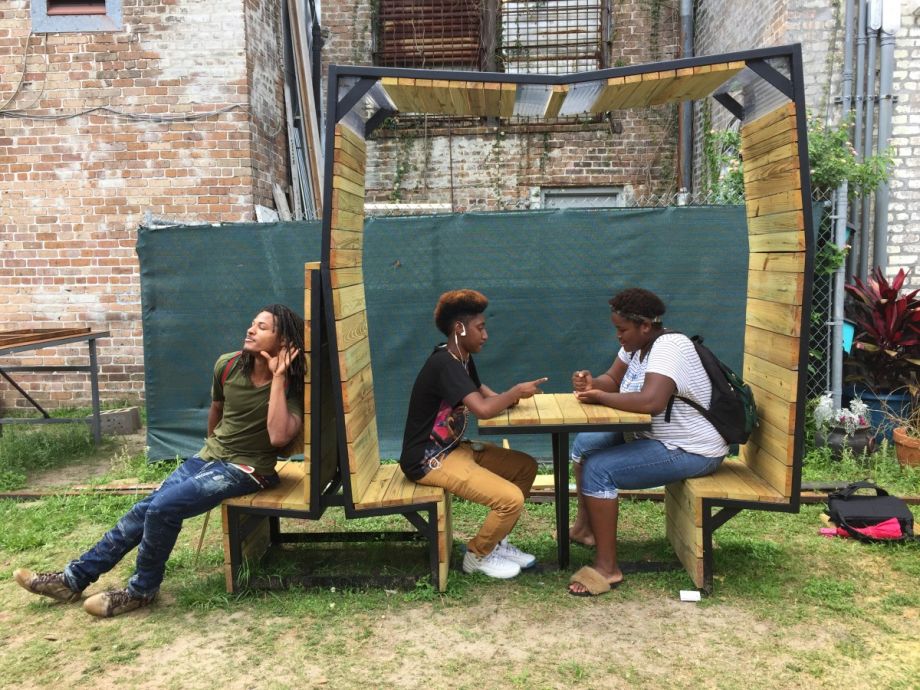 Students at The Net, an alternative high school, previously worked on projects like designing new bus shelters. Now, fourteen students will collaborate on arts projects that showcase resilience in the Gentilly neighborhood. (Photo courtesy The Net)

In 2015, grant writers in New Orleans decided that art should be part of resilience planning. They were working on a competitive Housing and Urban Development Department (HUD) grant to support the planning and water-management infrastructure for the Gentilly Resilience District.

Gentilly is a diverse neighborhood in New Orleans, and while some homes escaped Hurricane Katrina with no flooding, others were submerged by more than six and a half feet of water. In 2016, New Orleans was one of 13 communities to win a $141 million grant in the National Disaster Resilience Competition organized by HUD and the Rockefeller Foundation. The competition aimed to inspire and support cities working to make themselves more resilient to the impacts of climate change. Now, three years after the award was announced, the Arts Council of New Orleans is conducting trainings for artists who want to get involved in co-creating public art in the neighborhood.

The grant allocates roughly $200,000 to public art, says Heidi Schmalbach, executive director of the Arts Council. “The idea was to take a holistic approach to resilience,” Schmalbach says. “So, looking not only at infrastructure but people and awareness and culture and workforce development and just thinking how multiple sectors come together to create and demonstrate what a resilient community looks like.”

Colleen McHugh was part of the team that drafted the HUD proposal. At the time, she worked for the New Orleans Redevelopment Authority. “I think art can be a tool to help explain and engage people in the complexities of how infrastructure works and the history of New Orleans’ environment and how that relates to New Orleans’ social history,” McHugh says.

Along with recognizing art’s ability to break down history, McHugh sees public art as a visionary part of the infrastructure design process. For example, for decades a number of New Orleans canals have been covered by concrete. That constricts the flow of water and potentially makes them more dangerous if heavy rains produce flood-like conditions. It also deprives the community of the cooler air near an open body of water. Public art, McHugh says, enables residents “to engage with future visions that might not be totally possible now, but that might be possible down the line,” such as uncovering the city’s canals.

For Schmalbach, the idea is to have artists create installations that speak to the reality of living with water. To do this, however, those artists have to have at least a basic understanding of how water management infrastructure — like permeable pavement and rain gardens — actually work. To equip the artists with this knowledge, the Arts Council partnered with Prospect New Orleans, a triennial public art exhibit, to set up the Public Art school, two workshops that kicked off on November 19th.

The two workshops — Public Art 101 and Water and Community Resilience 101 – offer artists training in how to prepare a competitive proposal for a public art project as well as a basic education in New Orleans’ water management issues. The water workshop will be run by The Water Leaders Institute, a non-profit organization, which aims to expand the public’s understanding of the risks New Orleans faces from climate change while encouraging public participation in developing solutions.

Aron Chang is an urban design consultant and a co-founder of Water Leaders. He praised the Arts Council’s work for its comprehensive approach to urban planning. “It’ll go a long ways toward shaping the identity of the District as a whole and provide a diversity of entry points for people to engage,” Chang says. For example, he explained, someone who may not read a sign explaining how pervious paving works or what a rain garden is might connect with a piece of public art.

These engagement efforts aren’t limited to adults. Shortly after HUD announced the Resilience District award, the City of New Orleans approached the Arts Council to develop a plan for implementing the public art element. At the time, Schmalbach says, the Council was running a youth-development program called Youth Solutions that connected young people with artist mentors. The groups would design interventions, such as re-imagined bus stops, for their neighborhoods and schools. “[They] have the power to decide,” Schmalbach says of the program, “what kinds of creative, artistic interventions [they] want to see that further the [water management] objectives.”

The youth are students at The Net, an alternative high school with campuses in the Gentilly and Central City neighborhoods. Fourteen students will participate in the Gentilly-focused version of the youth-artist collaborations. The youth will receive stipends for their time, but Tim Spahn Sattler, the school’s internship coordinator, emphasizes that their intellectual and creative contributions will also be acknowledged.

This kind of experience, says Spahn Sattler, helps young people see that they can shape their educational path. Through the Arts Council program, The Net students have the opportunity to collaborate with artists and to learn skills like welding and mural painting. This, Spahn Sattler says, gives the youth “access and exposure to different career opportunities” while also equipping them with technical skills that can help them choose a post-graduation path.

Applications for the youth program close in early December with finalists being announced early next year.

“I think the role of artists, the role of art, is that of creating opportunities for citizens to engage and interpret these changes to their environment,” Chang says. Having beautiful objects in neighborhoods, he believes, means that people will feel a sense of ownership, which, he says, “is the starting point for thinking about stewardship and maintenance.”

Tags: resilient cities, climate change, new orleans, for whom by whom