How Katrina Killed Recycling in New Orleans – Next City 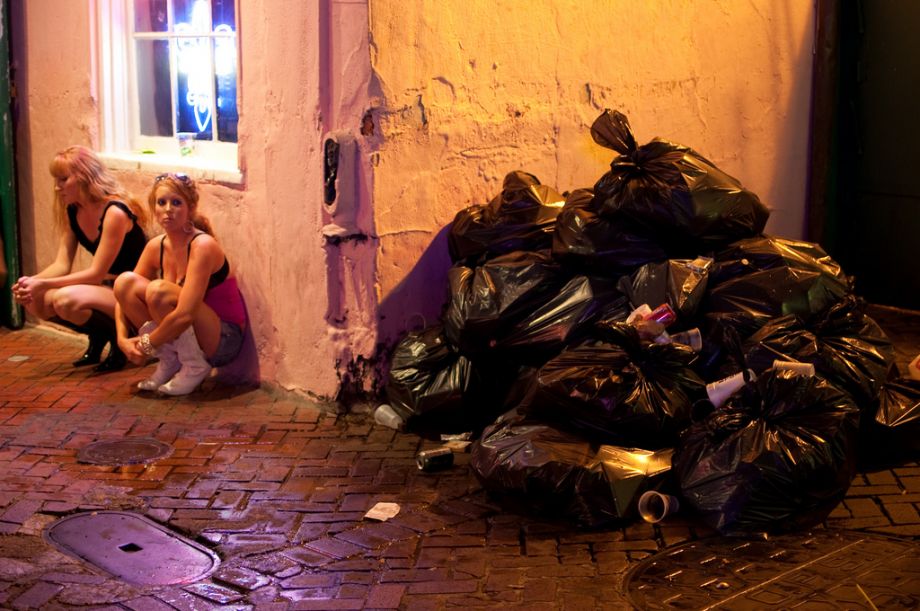 Nearly all of those empty bottles on Bourbon Street have gone straight into landfills since Hurricane Katrina. Photo credit: chuckyeager via Flickr

Bourbon Street garbage pickup in New Orleans has a distinct ring to it. As they tip cans into trucks, garbage hoppers working the legendarily boozy span create a chorus of high-pitch dings made by bottles hitting bottles. All of it is headed to the landfill, because the region lacks a glass manufacturer that can melt it down and recycle it.

Like most other American cities, in-ground garbage dumps are a fact of life in this swampy city, despite a water table so high that many “burials” are in above-ground tombs. But, says Darryl Malek-Wiley of the Sierra Club, “Putting stuff in a landfill in south Louisiana is not intelligent.” He notes that Louisiana’s relatively flat landscape does have some peaks: “garbage mountains,” the result of landfills filled higher than the brim.

New Orleans garbage problem was thrown into sharp relief after Hurricane Katrina, when officials were faced with an unprecedented amount of storm debris and needed a place to put it. Though state and federal agencies were able to salvage many of the deluged cars and larger appliances, they ended up shoveling the rest of it – everyone’s soggy couches, waterlogged carpets, moldy walls and under-the-sink pesticides – into an unlined landfill that advocates now worry could end up like a previous hurricane-debris dump, which became a Superfund site.

“We might be setting ourselves up for another environmental problem,” says Malek-Wiley.

The proportion of household waste that went into the landfill at that time? One-hundred percent. Incredibly, for six years after Katrina, the city didn’t recycle at all, partly because the automated sorting facilities had been wiped out by the flood. Since restoring curbside pickup in 2011, New Orleans sanitation officials have strived to increase the amount of everyday household trash that is recycled or re-used. But because of where New Orleans lies, in hurricane-threatened coastal Louisiana, the city has a much bigger task than simply sorting bottles – it needs to prepare for the crush of debris that will be left behind by the next natural disaster.

In August 2005, post-Katrina New Orleans was a town defined by its debris. After the waters receded, pictures of wreckage piles became the media’s go-to storm-related imagery. Debris specialists – yes, such people exist – break down such wreckage by category: vegetative debris (fallen trees, which couldn’t be sent out of the area because of the city’s Formosan-termite infestation); white goods (appliances); electronic waste (computers, TVs, stereos, telephones); and automotive-related trash, which included not only the tens of thousands of cars, trucks and boats left behind, but also batteries, tires, motor oil and other fluids. Kept away by out-of-state evacuations and floodwaters that took weeks to subside, most New Orleanians couldn’t return home to help with cleanup by, say, emptying out their refrigerators, the contents of which soon evolved into another debris category: “putrescibles,” or rotten and spoiled food.

Post-Katrina debris debates often invoked the Agriculture Street Superfund site, a dump used after Hurricane Betsy in 1965 that was nicknamed “Dante’s Inferno” because of its ongoing subsurface fires. The dump was linked to health issues in residents (including cancer) and is still covered by a ghost town of brick townhouses and apartment buildings that were ruled unfit for habitation after Katrina. City residents successfully fought officials over landfill site selection, winning smaller capacity at one landfill and closure at the other.

But the massive cleanup continued apace. Most of the stuff destined for landfills was called C&D, debris-expert shorthand for construction and demolition debris, which under non-storm conditions has been stripped of asbestos, lead and arsenic so it can be sent to less-protected, unlined landfills. But that sort of hazardous-waste separation was essentially impossible after hurricane-force winds and floodwaters mashed everything together and covered it with mold. So the Louisiana Department of Environmental Quality (LDEQ) expanded the state definition for C&D debris to include debris from all demolished homes and their contents and authorized unlined landfills to accept that debris. But the overall rebuilding plan for the region did not specify that re-use and recycling were priorities for rebuilding, says Malek-Wiley, so bricks, tile roofs and other re-usable building materials all ended up in landfills.

In 2006, the Louisiana Legislature directed the LDEQ to create a Disaster Debris Management Plan that would prioritize the reuse and recycling of materials, though it’s still unclear whether storm-damaged buildings would be deconstructed and reused. The city of New Orleans has also created such a plan, and obtained approval from LDEQ to compost tree branches and shrubs after its most recent disaster, Hurricane Isaac in 2012.

Nationally, about one-third of glass containers are recycled. But no glass will be accepted for curbside pickup in New Orleans anytime soon, say city officials. For those willing to pay, a company called Phoenix Recycling began recycling glass in New Orleans over a year ago for subscribers who are billed a monthly fee. The glass is hauled to Mississippi, ground up and mixed with cement to make aggregates for roads and other construction. But Phoenix owner Chris Prasad hauls the glass – roughly 35,000 pounds a week – to the manufacturer to get it of his hands; he isn’t paid for it. And his customers have to place the glass into a separate recycling container, otherwise it can cut up conveyor belts, machines and trucks.

“Recycling exists because of economics,” Prasad said. “It’s cheaper for us to, for instance, use recycled cardboard.” With a little ingenuity, those markets can be created. For example, other countries melt down glass to make glass beads, which would seem to have a natural market in New Orleans, where tons of plastic beads are caught, recycled and trashed each year during Carnival.

At this point, if Phoenix hauled glass, which is heavy, from New Orleans to the closest glass manufacturer several hundred miles away, it would likely be shipped by train. “I’d lose money like a rockstar,” Prasad said. Still, whenever Prasad walks down Bourbon Street, he eyes the trash: cardboard, beer bottles, plastic to-go cups. “Almost everything is recyclable,” he said. “But they would have to do some work at their end.”