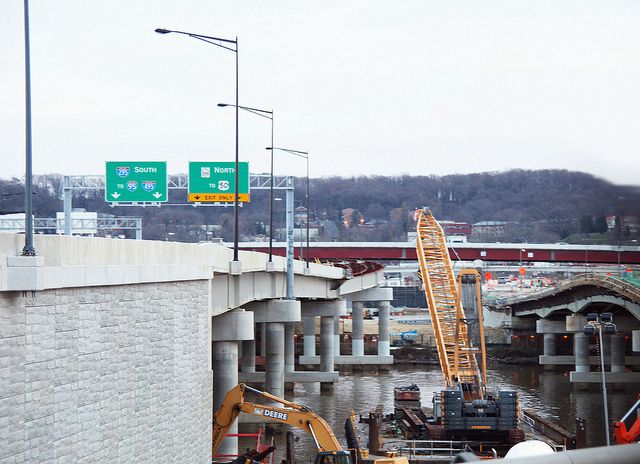 Funny things can happen when you’re waiting for Jan Gehl. Two-and-a-half years ago, Scott Kratz, then vice president for education at the National Building Museum, invited Harriet Tregoning, then the District of Columbia’s chief city planner, to meet the Danish architect and urbanist.

“Jan was running a little late to breakfast,” Kratz recalls, “so I asked what I thought was an innocent question at the time: ‘What’s happening with all that construction on the 11th Street bridge?’” Kratz was referring to the complex of road crossings over the Anacostia River, under renovations since 2009. The bridges connect the booming Navy Yard area with neighborhoods east of the river, some of the poorest in the city. Constructed and reconstructed throughout the 19th and 20th centuries, the bridge’s latest iteration — two spans thrown up in the decades after World War II — was being replaced with three new spans. But what of the old bridge piers?

Kratz goes on: “Harriet looked across the breakfast table and said, ‘It’s interesting that you ask that question, Scott, because I had this concept to use this unique point in time to transform part of the old span into a new civic space, but I need some help. What do you think?’”

With the old bridge pillars, which would otherwise be demolished, still in the water, Tregoning envisioned a linear park laid out atop them, bridging — literally and figuratively — the gap between the Navy Yard area and the poorer neighborhoods east of the river. Kratz has since quit his job at the National Building Museum and is now working on the project full-time as its first staff member, though many more are planned to come.

Potential placement of the 11th Street Bridge Park in relation to roads that cross the Anacostia River.

The High Line in Manhattan is an obvious reference. Both projects are — or, in the case of the 11th Street Bridge Park, hope to be — linear parks, but the commonalities end there. The High Line glides above West Chelsea and the West Village, some of the New York’s priciest neighborhoods, while the 11th Street Bridge Park would straddle the boundary between wealthy, white Washington and the poor, still majority-black sections of the city. (While the Anacostia neighborhood, on the other side of the bridge from the Navy Yard, is experiencing a revival of sorts, most of the surrounding area has so far escaped gentrification pressures buffeting the city.)

And while the High Line reused a Depression-era railroad trestle, the 11th Street Bridge Park would sit atop a decommissioned postwar roadway, meaning that it would not eat up a valuable railroad right-of-way. However, the roadway siting also poses one of the biggest challenges for winners of an upcoming design competition: Making the bridge feel accessible to pedestrians, especially those east of the river, whose waterfront was marred by a stockade of highways in the postwar era.

The 11th Street Bridge Park would also have more active uses than the High Line, which is essentially a planted walkway. “Interestingly,” Katz says of the 170 community meetings he held to hear residents’ desires for the park, “we heard the same things from both sides of the river — whether it’s a Capitol Hill million-dollar house or Barry Farm,” a neighborhood-sized public housing complex east of the river. These include an environmental education center, urban agriculture, performance space and food sales. Kratz also envisions a streetcar stop in the middle of the bridge, on a yet-to-be-funded line that would cross the Anacostia River. The bridge, Kratz says, could extend to about twice the width of the existing 60-foot piers, leaving 120 feet across to accommodate all these activities.

Kratz and Tregoning have already gotten buy-in from a number of politicians — they’re taking an “ecumenical approach,” as Kratz puts it, to D.C.‘s proliferating selection of mayoral candidates — as well as the dizzying array of agencies that have a say in development in the District. Tregoning has gotten support from the Navy Yard, the District Department of Transportation, the Commission of Fine Arts and the Capital Planning Commission, as well as the city administrator and the mayor.

Perhaps most impressively, given its somewhat obstructionist (my words, not the 11th Street Bridge Park’s) attitude toward development in the District, the National Park Service is also on board. Kratz says NPS is even open to giving over a piece of Anacostia Park for use by the Bridge Park as a secondary space and its landing.

Then there’s the biggest challenge at all: money. Kratz has set a total goal of raising $35 million for the park, which includes $25 million to build the thing plus another $10 million as an endowment for ongoing expenses. The $25 million figure comes from Skanska, the Swedish construction giant and developer who’s working on the new 11th Street Bridge — the roadway, not the park — and who tallied up the costs for decking over the piers and building a number of structures on top.

The $10 million endowment would throw off around half a million each year in interest, which Kratz readily admits is nowhere near enough to fund the 60-person staff he’d like to see working on the project. That’s why part of the design competition will be about maximizing the amount of revenue-generating activities on the bridge. “Whether it’s restaurant revenue or renting the educational center space out for special events,” Kratz says, “how do we minimize the annual dollars that we have to raise from philanthropic interests for ongoing programming?” Parks, he points out, “will turn to blight in a heartbeat if they’re not properly maintained.”

While D.C. may not have as many deep-pocketed hedge fund managers and media mavens as New York — not quite as many Diane von Furstenbergs — the project, Kratz notes, is also smaller than the High Line, which got $150 million for its first capital program, split in half between the city and private donors. (Kratz always envisions asking the city for some money, leveraging a future economic development analysis to convince politicians that their contributions will be returned to the city many times over in private sector development activity and ancillary benefits like health and education). And the park has already demonstrated the ability to pull in private donations. It’s halfway to its $1 million pre-capital campaign goal, with thousands raised from philanthropists and foundations, plus not a small number of developers. (Joe Horning, Forest City Washington, JBG and Grosvenor all made contributions.)

The next big milestone will be the design competition. The jury has already been selected, and ranges from urban design and landscape architecture professionals to Howard Frumkin, dean of the School of Public Health at the University of Washington. “Everything comes back to the design competition,” Kratz says. “That’s the DNA that everything else comes from.” The four finalist designs will be shown publicly this fall.

Kratz will speak about the intersection of public space and health later this month at Kaiser Permanente in D.C. And while the bridge park is working to raise money to make the dream a reality, it has already acquired some plum virtual property: Its website, launched earlier this week, is bridgepark.org.