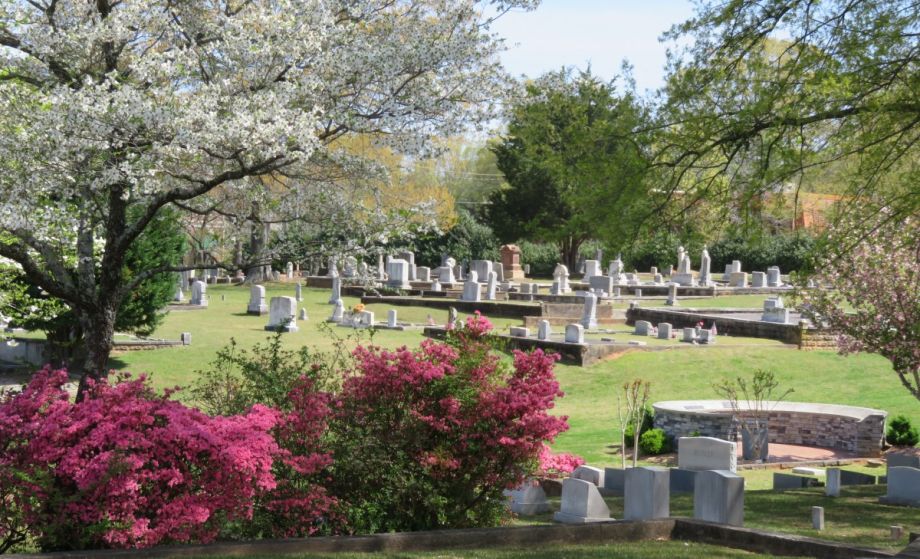 If city-dwellers wanted to visit a green space in the 19th century, they likely found themselves at a cemetery. During much of that time, cemeteries played the role that city parks often do today, acting as a spot for people to gather. But increasingly over the past decade, communities have once again embraced hanging out in cemeteries.

So when the initial plans for a historic cemetery in Kennesaw, Georgia, called for merely installing a fence around it, planners knew there was more to do in this Atlanta suburb.

“Kennesaw was looking for ways to instead of fencing off to make it more accessible to their citizens,” says Holly Vine, executive assistant at the Atlanta Regional Commission planning agency.

The city worked with ARC to gauge resident opinion and make the publicly owned Kennesaw City Cemetery into a green space for its burgeoning downtown. The cemetery, whose earliest known burial dates to 1863, has some prominent residents who contributed to Kennesaw’s founding.

“The cemetery by location is going to be smack dab in the middle of a lot of redevelopment for downtown,” says Darryl Simmons, zoning administrator for the city, meaning more people will be around. “These folks could be walking around downtown, biking around downtown looking for things to do, and they’re going to see and discover the cemetery. So we saw this as a unique opportunity to position a cemetery for all of the new folks in addition to people who’ve lived there for many, many years.”

The population of Kennesaw and its county continue to shift. Cobb County, which once had a mostly white population, has moved closer to becoming a majority-minority county. It was 57 percent white in 2010. The latest numbers put it at about 51 percent.

Simmons worked with ARC’s Community Development Assistance Program, a two-year-old program that provides technical assistance and grants for local government and nonprofit projects, in order to make the cemetery into more of a green space as people come downtown. Simmons says as the city undergoes redevelopment, this will connect people to Kennesaw’s history. The new construction will either be built around the cemetery or designed so residents will have a view of it.

“There’s all these plans that had identified that this was an important site,” says Allison Duncan, an ARC project manager who worked with Kennesaw on the cemetery. (She has since left ARC and works for metro Atlanta’s Douglas County.) “But most of those plans stopped right there. Because a cemetery is a very specific type of cultural resource and a very specific type of historic resource, I think that’s where we tried to pick up where those other plans had stopped and said, ‘Yes, you’ve identified this as being important. Now what does that mean?’”

Kennesaw and ARC did community outreach to see what residents wanted out of the cemetery, making sure to include people of diverse backgrounds and ages, Simmons says. They asked for events such as stargazing and storytelling and other initiatives that delve into Kennesaw’s history.

As planners did community engagement, they saw that a lot of people in Kennesaw wanted to feel a connection to the city.

“Kennesaw is growing,” Duncan says, pointing to the expansion of Atlanta and Kennesaw State University, the third-largest university in Georgia. “So how do you kind of accommodate new folks coming into the city while making sure that you kind of respect the past history of the city? I think the cemetery offers a tremendous opportunity to accomplish both of those things.”

One proposal from the community was reenactment of historical events, including those connected to a local Civil War military training camp called Camp McDonald. And in addition to expanding programming, Kennesaw will do cemetery improvements such as repairing some of the markers.

ARC also showed Kennesaw how other Atlanta cemeteries that re-envisioned their green space, including Oakland Cemetery and Decatur Cemetery, started including more people.

“What they were doing is kind of giving an overall high-altitude look at other cemeteries and trying to identify some of their challenges,” Simmons says. He noticed that some of these places had made their cemeteries into a community destination. “Every successful town that was able to promote their historic areas or their cemeteries did so with a diverse group of folks.”

Now, Kennesaw is trying to have volunteers, who do everything from conducting projects at the cemetery to promoting it, reflect the demographics of the city’s population. That includes doing outreach to nearby Kennesaw State University. The fast-growing college has one of the most racially diverse campuses in Georgia.

“The approach here is going to be casting a wide net,” he says. “It has to be a lot more robust. It has to be more diverse.”

The study with ARC finished in 2019 and planning for the project is underway.

Simmons is looking to the 2020 Census, which has since been delayed due to COVID-19, to inform Kennesaw’s projects going forward — including the work to make the cemetery a gathering place. “All those things will paint a picture for the city as far as who’s in the population,” he says.

The work at the cemetery should help make all the new residents that Kennesaw has gotten feel welcome, Duncan says. It hearkens back to the 19th-century movement that saw people using cemeteries as community greenspace.

“This is fundamentally a sacred space for the city,” she says. “Everything that we approach was through that lens of not trying to turn it into something fundamentally different than what it was, but kind of extending that same care and that same stewardship and introducing it to a whole new group of people who really wanted to embrace that.”