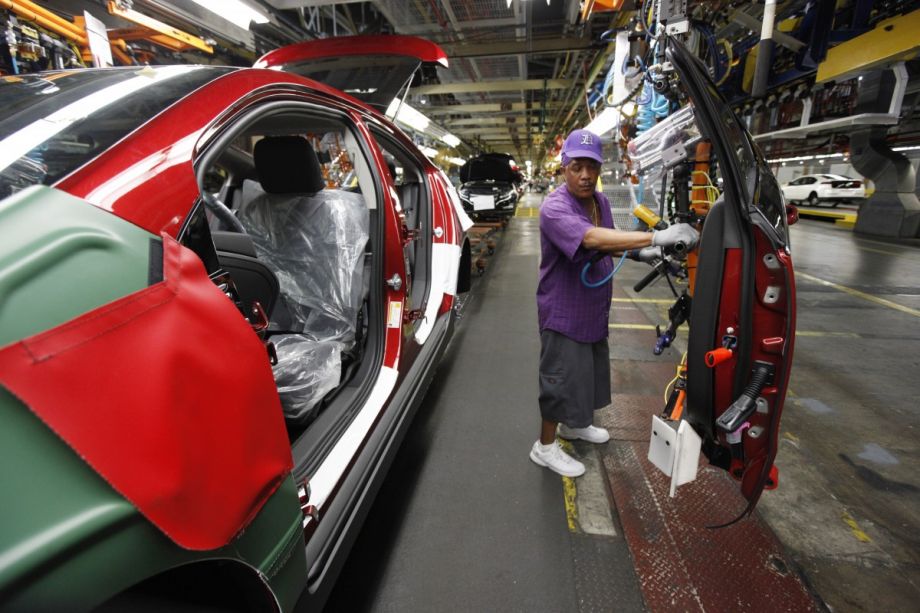 In this photo from 2011, assembly line worker Edward Houie moves a door into position for a Chevrolet Volt at the General Motors Detroit-Hamtramck Assembly plant, one of the five manufacturing facilities GM intends to shut down. (AP Photo/Paul Sancya)

The moves affect 8,000 white-collar jobs and about 6,200 factory jobs, the Free Press added.

Ars Technica reports that GM says it will no longer make the Chevy Volt, Impala or Cruze for the North American market, where consumers are buying fewer cars and more trucks and SUVs.

“The actions we are taking today continue our transformation to be highly agile, resilient, and profitable, while giving us the flexibility to invest in the future,” GM CEO Mary Barra wrote in a press release.

GM’s stock was up 5 percent after the announcement, the Free Press reported, but lawmakers were incensed. Via The Hill, Sen. Sherrod Brown (D-Ohio) called the closings “corporate greed at its worst.”

Even Republicans got on board. “We don’t like it,” Pres. Donald Trump told reporters, according to PBS News Hour. “I spoke with [Berra] when I heard they were closing, and I said, you know, this country has done a lot for General Motors. You better get back in there soon.”

Sen. Rob Portman (D-Ohio) said he was “deeply frustrated” by the announcement, The Hill said.

The 300-acre Hamtramck plant that is closing in Detroit has a bitter history, the Free Press reported. Building it in the early 1980s required razing Poletown, a neighborhood of 4,000 people, which Detroit used eminent domain to seize on behalf of GM.

Later court decisions overturned the idea that cities can use eminent domain to take private land to give to another private owner solely for economic development, but as the Free Press’s John Gallagher notes, cities are still courting huge economic deals (hello, HQ2) at the expense of existing neighborhoods. Urban planners, he writes, “hope to create districts where residents can live, work, shop, and find recreation opportunities all within a 20-minute walk — districts, in other words, like the Poletown neighborhood wiped out by the GM project.”

Hamtramck Mayor Karen Majewski told the Free Press that the history of the plant makes its closure more shocking. “That a neighborhood was destroyed, lives were upended … institutions crumbled to the dust to create this plant and to think of it now being empty is a real blow to the legacy of that neighborhood that was sacrificed for that plant,” Majewski said.

Detroit Mayor Mike Duggan also weighed in on the origins of the plant.

“I reminded [Berra] that we moved thousands of people out of that neighborhood, hundreds of businesses, six churches and a hospital to create that assembly plant, and I felt that the city of Detroit deserved more consideration,” Duggan said.

Duggan added that “the news is troubling,” but that the city is “working together to come up with a solution that works for GM and the employees.” Later Monday, during an unrelated news conference, he added that “we’re not giving up” on GM and that “we’re going to try to convince them that a modern plant in an area where you can get a good workforce is an asset.”