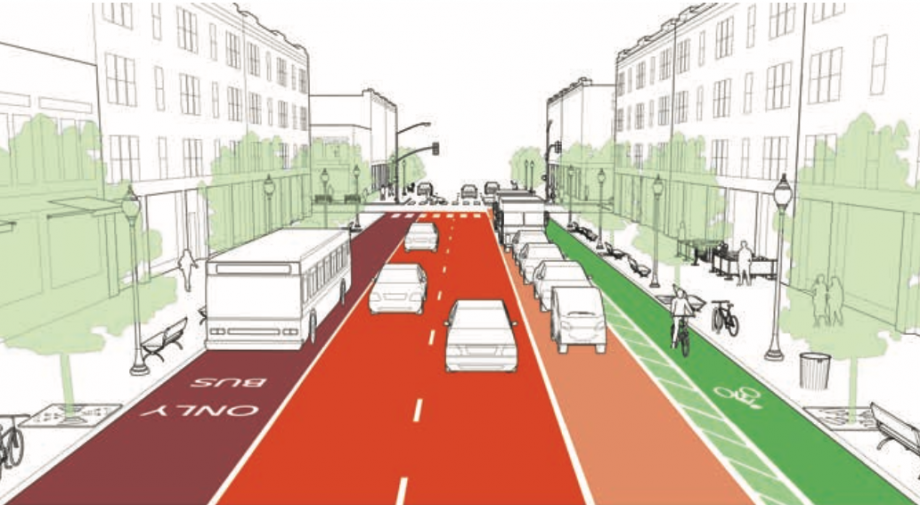 Out of the many changes former NYC Mayor Michael Bloomberg brought to the city, one of the few that was universally beloved was his administration’s transformation of many city streetscapes. Current Mayor Bill de Blasio and former Police Commissioner Bill Bratton were widely blasted when they casually considered reopening the Times Square stretch of Broadway to car traffic. It was one of many indications that a new era was upon cities, one in which the car was no longer king.

“This guide is drawn from life and from the real-world designs that are transforming streets from Auckland to São Paulo to Addis Ababa,” said Janette Sadik-Khan, NACTO chair and principal at Bloomberg Associates. “The tested and proven designs in these pages can be adapted to city streets around the world to support local economies and make them safer for everyone, no matter how they get around. It is no longer a question of engineering or innovation but of the imagination and will needed to update city streets for a new age.”

The guide contains input from 72 cities in 42 countries, boiling ideas down into 21 street typologies and 50 street and intersection layouts, with before-and-after 3D model comparisons. The overall philosophy holds pedestrians in the highest priority, followed by cyclists and transit riders, businesses including street vendors and public service providers, and lastly, people in personal motorized vehicles.

Multimodel streets are emphasized throughout, for safety purposes as well as efficiency. Using NACTO data from the past 15 years, the guide lays out calculations comparing a car-oriented street with a multimodal street. A car-oriented street with capacity for 12,300 people per hour would have capacity for 30,100 people per hour as a multimodal street designed intentionally for bikers, transit riders, pedestrians and cars, the guide says.

“Streets are the foundation of a city’s entire social structure — getting around, working, living, shopping and playing,” says Enrique Peñalosa, mayor of Bogotá. “With the guide, cities have, for the first time, a universal resource for creating cities that operate for everyone who uses them.”

As one of the examples, Bogotá has the world’s busiest BRT system, Transmilenio, with 12 lines serving 144 stations and more than 100 kilometers of exclusive transitways. It accounts for 4 million trips each day and a mode share of about 64 percent of all trips in the city. Partnership between public and private agencies has been key to its success. While the city planned and built the system and continues to regulate and manage it, private companies actually run the buses.

The guide also includes recommendations for working with informal settlement communities to improve street safety and connectivity with utilities and formal transportation networks. According to the UN, 32 percent of the world’s population lives in “slums,” including many in informal settlements.

In one example, a street upgrading project in Korogocho, an informal settlement in Nairobi, involved citizen associations and nonprofits as well as designers, engineers and public agencies. The process aimed to use participatory planning in order to upgrade streets in the community. By seeking out and responding to citizen input, the process could support more than just safer, more visually appealing streets. After the project, which resulted in 20 percent more open space in the community and new connections to surrounding infrastructure, residents also reported an increased number of pedestrians, vendors and business activity.

“For more than a century, street life was what grew through the cracks in pavement — a liveliness that thrived despite the asphalt and traffic,” says Jan Gehl, urbanist, architect and author of Cities for People. “We must instead design them to make active, engaging street life possible.”