Gentrification: Not Only About White People – Next City

Gentrification: Not Only About White People 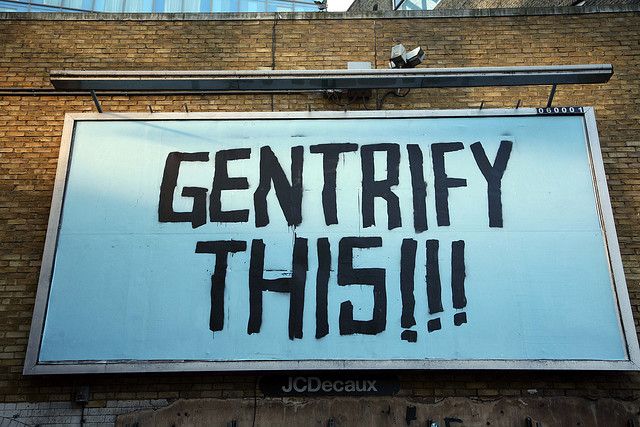 What is gentrification, and how much of it has to do with race versus class?

It’s a question that often goes unanswered in both local and national debates on the issue. The confusion leads many to the reductionist belief that more white people in an urban neighborhood implies gentrification, while fewer white people — or more accurately, a white population that isn’t growing — means an absence of the phenomenon.

Case in point: An interesting chart popped up yesterday on Flypaper, the blog for the Thomas B. Fordham Institute, a non-profit think tank dedicated to education policy. Mike Petrilli, the organization’s executive vice president, culled Census data and made a list of the top 25 ZIP codes in the country that have seen the largest increases in the percentage of white residents between 2000 and 2010.

Petrilli — who readily admits that his expertise lies in education, not demographics — calls these ZIP codes “the fastest-gentrifying neighborhoods in the United States.”

Nate Berg of The Atlantic Cities took a pretty thorough look at Petrilli’s post and, while noting that the results are significant, found some problems with the researcher’s decision to use ZIP codes as a measurement. For instance, Columbia, S.C. tops the list with a white population that jumped by over 47 percent — but that particular ZIP code only applies to P.O. boxes, whose owners can easily live elsewhere. Petrilli himself acknowledges that using ZIP codes isn’t the best way to collect reliable data, since those boundaries can change according to the needs of the Postal Service.

However, Berg stops short of calling out the post’s core conceit: That more white people automatically translates to gentrification. Even Petrilli seems to realize this flaw, conceding that when measuring gentrification, “you’d really want to look at changes in income levels, but those data aren’t available yet for 2010.”

But if that’s the case, why slap on the “gentrification” label in the first place? Undoubtedly, race and class in the U.S. are linked in a complex and pretty irretrievable way. Nonetheless, they’re not one in the same. Washington, D.C. has seen an influx of middle-class black residents whose presence has changed the economic landscape of certain traditionally low-income neighborhoods — or, to put it another way, black gentrifiers. As the New York Times reported several years ago, this has even happend in Harlem.

Which isn’t to say that gentrification is wholly about socioeconomic status to the exclusion of race, either. (For an interesting take on just how central race is to the topic, check this March 2011 blog post by Kenyon Farrow.) It’s just that any responsible discussion on something as divisive and widely misunderstood as gentrification shouldn’t fail to take a comprehensive look at the issue.

Otherwise, we wind up with a damaged dialogue, heightened tempers and very little progress. For one, just look at what’s happened at community meetings in the Point Breeze neighborhood of Philadelphia.