Cities Can’t Ignore That Food Trucks Have Grown Up 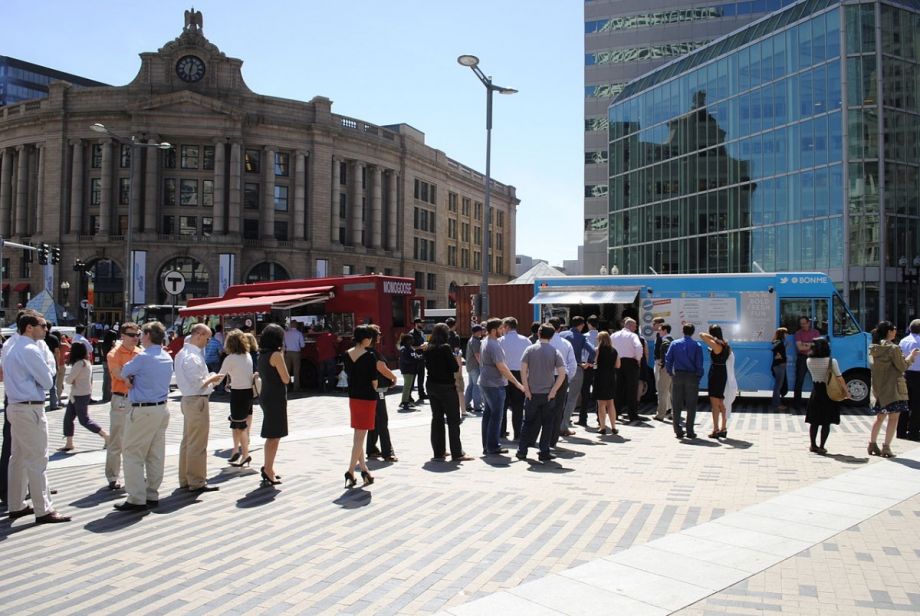 Less than four years ago, the Washington, D.C. food truck industry was fighting for survival. In December 2010, the city council was preparing to consider a moratorium on new food trucks, at the urging of landlords and brick-and-mortar businesses. But in the 11th hour, an ad hoc team of food truck owners ran down to city hall and convinced the council to reconsider. The proposed moratorium never made it to the floor.

It was the first in a series of hard-fought battles for the DMV (D.C., Maryland, Virginia) Food Truck Association, one of a growing number of such groups nationwide. In Tampa, Philadelphia, Los Angeles and at least a dozen other cities, food truck owners have formed trade associations to lobby for regulatory reform and share best practices in mobile vending. The food truck, scrappy upstart of the culinary world, has grown up.

Last year, the DMVFTA scored a major legislative victory with the D.C. food truck lottery system, effective December 2013. The system allots parking spots for popular locations by lottery, rolling in a different roster of trucks each month. Elsewhere in the District, trucks are free to roam wherever they can park legally.

Che Ruddell-Tabisola, executive director of the DMVFTA, calls the lottery “imperfect” and the response from local vendors “mixed.” But he’s quick to point out that D.C’s regulations are still “some of the best in the country because they preserve the industry’s central tenet — roaming.”

Now the DMVFTA has its sights set on northern Virginia, where vending is prohibited on many public roads. “We used to be 17 guys who met in the back of Duffy’s near U Street, and now we’re 70,” says Ruddell-Tabisola. “We have members in those jurisdictions [of Virginia].” Expansion, he says, is simply a “necessary function of an organization that’s member-driven.”

It’s also a sign of the food truck’s maturation into a fixture of the U.S. economy. According to the National Restaurant Association’s 2014 forecast, food trucks make up one of the fastest-growing sectors of the restaurant industry, with 2013 sales of nearly $700 million, or about 1 percent of total U.S. restaurant sales — not bad for a business model that didn’t exist before 2008. A 2012 study by Emergent Research projected that food truck revenue would quadruple to $2.7 billion by 2017.

All of which make the industry’s interests more difficult for cities to ignore. Matt Geller, founder of the nation’s first food truck trade association in Southern California, has seen “a lot more acceptance” over the years, both from regulators and from restaurant associations, often the fiercest opponents of mobile vending.

In city after city, Geller has seen the same “parade of horribles” from brick-and-mortar interests. “They’re gonna ruin everything, every restaurant’s gonna go out of business, it’s gonna be mayhem,” he paraphrases. “And it just never works out that way.” Geller credits food trucks with putting Los Angeles’ food scene on the map.

Since forming the Southern California Mobile Food Vendors Association in 2009, Geller’s mentored food truck associations in several cities (including D.C.) and founded the National Food Truck Association (NFTA) to foster communication among them. Geller focuses on educating vendors in each region, since he says “a lot of times trucks don’t even know the rights to fight for.” One of the NFTA’s long-term goals is to develop best-practice regulations for proposal to cities across the country. The organization is receiving help on this initiative from the Institute for Justice, a libertarian law firm with ties to the Koch brothers.

Still, it’s slow going for food trucks in several major cities, where laws dating back to the 1950s refer to vendors as “hawkers,” “hucksters,” or “transient merchants.” That’s the case in New York, where regulations aimed at hot dog and ice cream carts continue to prevent food trucks from gaining a foothold. “The regulatory structure disincentivizes entrepreneurs from investing heavily in [New York],” says David Weber, president of the New York City Food Truck Association, “because it’s so broken and risky to open a truck here.”

The NYCFTA has succeeded in drumming up public support for food trucks, but hasn’t been able to effect comprehensive reform. One obstacle is the complexity of New York City’s regulatory apparatus: five different agencies oversee mobile vending, making it difficult to “get everyone lined up and facing the same direction,” says Weber.

But he senses movement, notably from Brooklyn city council members Brad Lander and Dan Garodnick, who have sponsored legislation to amend the city’s street vendor laws. “We’re in it for the long haul,” Weber says. “All it takes is time for people to see the larger opportunity that the food truck industry affords.”

In Minneapolis-St. Paul and Philadelphia, food truck leaders are already at the negotiating table with lawmakers, laying the groundwork for regulatory reform. According to John Levy, president of the Minnesota Food Truck Association, Minneapolis’ regulations are relatively friendly to food trucks — with the exception of a rule that bars them from parking within 100 feet of a restaurant — but it’s a different story in the metro area’s outlying cities, each of which has a different set of vending regulations. Levy hopes the Twin Cities region will adopt uniform standards across its seven counties, but for now, he says, most of his members are content with the status quo. “If it ain’t broke,” Levy says, “I’m not inclined to try to fix it.”

Philadelphia’s vending regulations vary on a street-by-street basis, with some areas, such as Center City, off limits to food trucks and other areas open to metered parking. Vendors can also set up shop at Love Park and the Navy Yard if they pay the city a fee to get on the schedule. George Bieber, head of the Philadelphia Mobile Food Association (PMFA), is pushing for greater clarity in the regulations, rather than blanket extension of vending zones; the organization is currently in talks with a city councilmember (Bieber won’t say who) to draft the legislation. “What we’re shooting for is to go to places that really don’t have an active, happening scene,” he says. “We’re not necessarily trying to get into downtown and park outside of Joe Schmo’s restaurant.”

PMFA board member Diana Minkus manages Philadelphia’s Night Market, a pop-up food truck festival that has had an estimated $11 million impact on the city’s economy. In June 2014, Philadelphia Food Trust, which administers the program, received a $150,000 grant from the U.S. Economic Development Administration that will allow Night Market to continue.

The outlook in Philly and Minneapolis-St. Paul reflects a gradual shift in the food truck landscape toward collaboration between city stakeholders. Thanks in large part to the efforts of trade associations, more and more cities have come to recognize the mobile kitchen as a small-business model that’s here to stay.

In fact, Bieber views corporations, not brick-and-mortar restaurants, as the real threat to food trucks. Chick-fil-A, T.G.I. Friday’s, Taco Bell and Starbucks are just a few of the chains that have seized on the trend. Bieber fears that these corporations, who can afford higher permit fees, will squeeze independent trucks out of new vending spots in Philly. “We’re doing this for the little guy, for the small business,” says Bieber. That’s a sentiment that both food trucks and local brick-and-mortars can get behind.