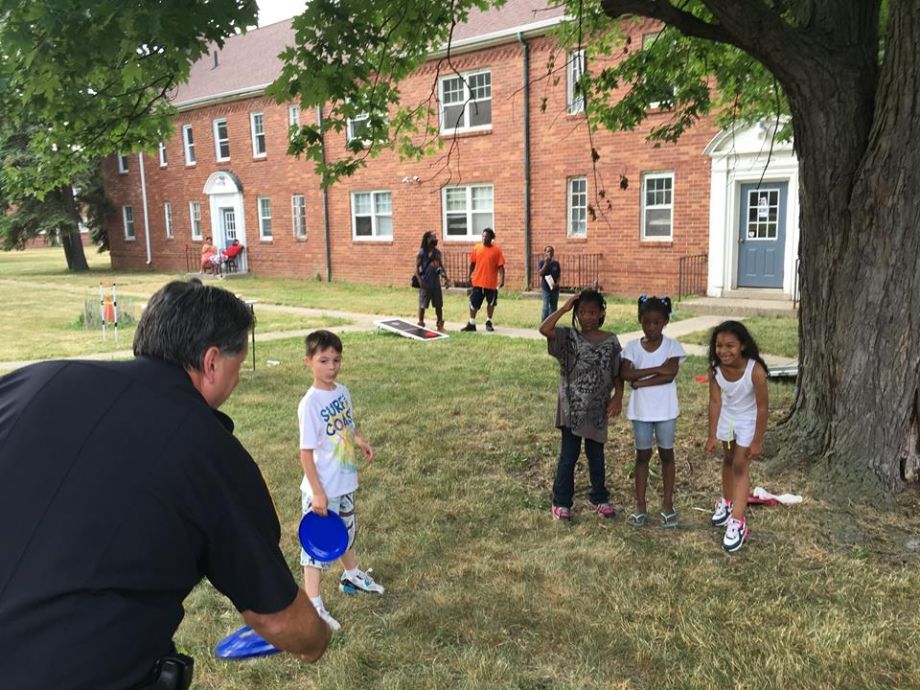 But that theory has come under criticism over the years, with detractors saying the approach only addresses part of a larger socio-economic condition that requires a more holistic approach to deal with inequities. And the evidence has been clear: people of color are disproportionately targeted by police under the approach.

Looking at high vacancy rates, violent crime and poverty in Flint, Mich., a group of residents, community workers, business owners and university officials came together to take a different tack. Instead of police patrolling around, ticketing folks for minor infractions, the group implemented what’s become known as the “busy streets” theory. It’s a theory reflective of work from researchers such as Patrick Sharkey, who are only now shedding light on the role of community members in reducing crime through local initiative.

Following a three-day-long workshop in 2012, the University Avenue Corridor Coalition formed to fix up a three-mile section of University Avenue, a stretch that spans through the city’s Carriage Town and central neighborhoods. The mostly volunteer group rolled up their sleeves, starting small with neighborhood cleanup days, planting flowers, mowing lawns, repairing park benches.

The coalition now counts more than more than 80 individuals, block clubs, local businesses, local government departments and Kettering University. The “busy streets” has now been studied and proven to have a lasting impact on the community.

“When you take care of the little things, people notice,” says Dr. Robert McMahan, president of Kettering University. “And they see others taking pride in their place and that is contagious.”

The results have been clear: less crime and more business.

As for positive development, the corridor saw $50 million in investment over that same time frame, including the reopening of the neighborhood’s historic Atwood Stadium, an 11,000-seat venue that Kettering took ownership of in 2013 and revitalized; the closure of a party store once a hotspot for crime that was redeveloped as a sandwich shop; and across the street, an empty lot once a popular area for drinking in public is now University Square, a park space that hosts events, food truck rallies and family-friendly activities.

In Flint, coalition members believe the success of the approach has as much to do with community members feeling a sense of ownership of improving the area as it does with the collaborative, somewhat informal nature of the coalition’s efforts. Dallas Gatlin, executive director of the Carriage Town Ministries, a founding member group of the coalition, says there are no bylaws, no officers or bureaucracy that might otherwise get in the way of progress.

“The joy of seeing things get done, that things are getting done, is the fuel behind the growth. It’s not being bogged down by administrative involvement,” Gatlin says.

Carriage Town Ministries, a 130-bed shelter for men, women and children, asks that the people it serves perform community service in the neighborhood. Each morning, five days a week, 15 people are assigned cleanup duties in the neighborhood. The nonprofit’s objective goes beyond beautifying the area, focusing also on helping the people involved develop skills that could be applicable in the workforce, Gatlin says.

On top of regular neighborhood cleanups, Carriage Town members have restored five abandoned houses, which are now part of the organization’s campus. There’s a garden where folks can learn the basics of planting and harvesting crops, as well as fostering healthy cooking and eating habits. University Square is maintained by Carriage Town Ministries residents.

Gatlin, who previously worked for 30 years for General Motors, says there was a time when Flint had the highest household income per capita in the country for people under age 35, thanks to plentiful jobs in manufacturing. But as is common in other Rust Belt cities like Detroit just 60 miles to the south, the reality today is vastly different. The median income today for Flint residents is less than $26,000, with more than half of its families with children living in poverty. The city lost more than a quarter of its population since 1990s, leaving behind empty houses (one in five homes are vacant). Flint has the second-highest homicide rate in cities with populations under 100,000, trailing another post-industrial Rust Belt city, Gary, Ind.

While Flint and other post-industrial towns may never go back to the way things were, Gatlin and others are hopeful that efforts like those led by the coalition will help redefine the city’s future.

“I will probably be long gone before Flint becomes the fully vibrant college town that it will become someday, but people have to lay the groundwork now,” Gatlin says.