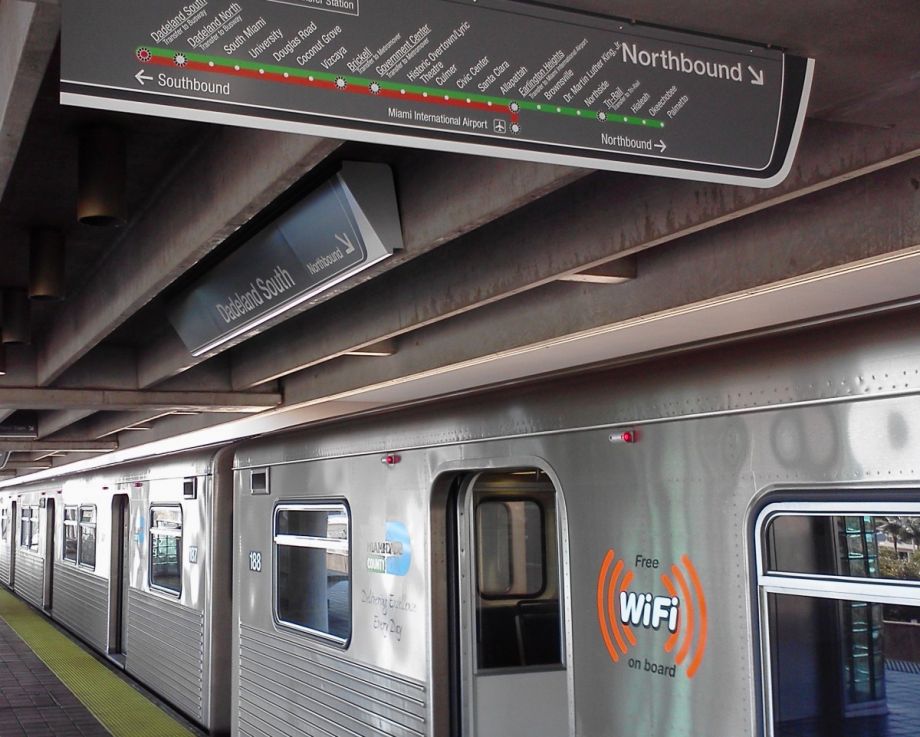 It takes a little more than one hour for an express bus to travel 20 miles along the busway stretching down south Miami-Dade County. Politicians representing cities along that route want transit trips to speed up. Specifically, they want a light-rail line that would cost an estimated $1.5 billion to build.

County Mayor Carlos Giménez thinks that is far too expensive. During his reelection campaign last year, he released videos showing his support for expanding Metrorail. But now he wants to spend less — and put $115 million into a bus rapid transit system on the busway.

“My hope is a train would be warranted,” says Commissioner Daniella Levine Cava, referring to an ongoing study on options for improving busway transit. Her district covers most of the busway.

Metrorail and most county bus routes have lost riders over the past two years, Miami-Dade Transit reports show. In May 2015, about 75,000 people rode Metrorail rail each weekday. That number dropped below 70,000 this May. Boardings at the southernmost Metrorail station, the busway’s north end, also fell since then.

“I don’t think we know why Metrorail ridership is going down,” Levine Cava says. “Maybe it’s crowded and dirty and AC doesn’t work. Maybe gas prices are going down. I wouldn’t say because ridership has gone down that there will be less of an appetite” for rail, she adds.

Meanwhile, one of the county’s few bus routes to consistently gain passengers has been a busway route, the 34 Express. Fewer than 2,000 people rode it each weekday in May 2015, but now about 2,600 ride it on weekdays. Route 34 is usually in the top five routes for passenger gains each year, county reports show. It runs during rush hour, from 5 a.m. to 8 a.m. and 3 p.m. to 7 p.m.

Route 34’s 20-mile journey takes an hour and seven minutes. Metrorail’s Green Line travels 22 miles in 47 minutes. Essentially, part of Miami-Dade’s southern bus versus rail debate comes down to whether it is better to spend $115 million or $1.5 billion to save up to 20 minutes on passengers’ commutes.

The January 2016 county study that estimated the costs of bus versus rail in south Miami-Dade recommended bus rapid transit, as did another county study 10 years prior. That mode would cost $40 an hour per user, compared to $84.40 per hour with light rail, the 2016 report stated.

There are a number of ways to improve current busway service, according to the Institute for Transportation and Development Policy, which promotes public transit in cities. Route 34’s operating hours could be increased. Bus fare could be collected before passengers board. Miami-Dade isn’t the only place where bus ridership has dropped in the U.S., and in February a national transit report suggested all-door boarding could be one way to reverse the trend.

ITDP also recommends that traffic lights be set to favor buses, and station platforms be level with bus entrances for easy access.

“The buses should have the ability as they approach the intersection to interrupt the light so they get right of way,” Commissioner Esteban Bovo suggested in July on Miami’s NPR station, WLRN. Still, Bovo prefers rail over bus rapid transit.

Mayor Giménez on July 17 proposed some of these improvement ideas to a county transportation board, the Miami Herald reported. Giménez would like pre-ticketing and air conditioning at each busway station. He’d also like to buy buses with big bay doors, which would allow dozens of passengers to enter and exit at once. His plan also calls for building overpasses at each busway intersection to separate buses from intersecting traffic. But the plan does not expand Route 34’s operating hours beyond rush hour, nor would it increase its frequency from every 10 to 20 minutes, a county spokesperson said in an email.

While it is possible to improve bus service instead of spending more on rail, south county leaders remain upset over a Metrorail extension that has been promised to them since 2002, when county voters elected to increase Miami-Dade’s sales tax by half a percent. The money was supposed to pay for rail expansion, but instead went to plugging budget holes in the county’s bus system.

But as Next City writer Rachel Dovey noted last month, Giménez’s motivation behind changing his mind from rail to bus comes in big part from the uncertainty about the federal government helping to pay for Metrorail’s expansion. Because of that, Giménez’s July 17 proposal states, “it is important we work closely with the state to pursue the 50 percent eligibility so that projects would be funded 50 percent locally and 50 percent by the state.”

Chris Persaud is a freelance reporter and programmer in South Florida. He has written or programmed for Fusion, Bankrate, The Progressive and The Palm Beach Post. His website, RichBlocksPoorBlocks.com, maps out income and other demographic data in every U.S. ZIP code.

Follow Chris .(JavaScript must be enabled to view this email address)