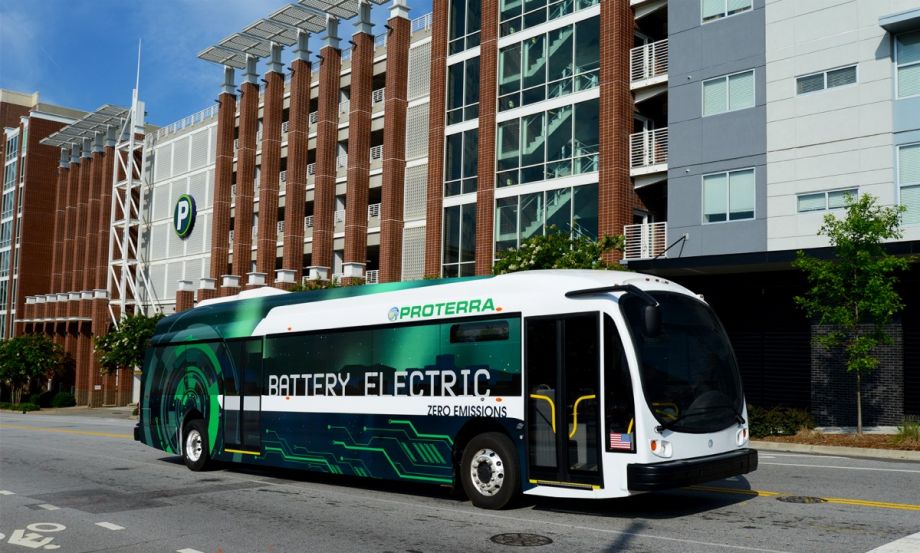 You’re probably familiar with the classic EV pitch: Trade in that 26-mile-per-gallon Subaru for an all-electric Nissan Leaf and voila! Your emissions footprint and monthly gas bill will plummet.

Ryan Popple makes a more extreme version of that pitch.

As CEO of Proterra, Popple oversees electric bus production — and if the Subaru-to-Leaf comparison sounds like a carbon-cutting upgrade, consider the math of electrifying what he refers to as “the least efficient surface transportation asset in the market.”

“Diesel buses get about four miles per gallon,” he says.

According to frequently cited figures from the National Transit Database, they average just a few percentage points higher, at around 4.71 miles per gallon.

And though diesel buses aren’t the only ones on city streets — 41 percent of all publicly owned buses actually use hybrid technology or alternative fuels according to the American Public Transportation Association — they’re still a majority. As Popple points out, that doesn’t just have troubling implications for the climate, but also for those who live and breathe right next to diesel lines, which he likens to smokestacks.

“Natural gas is harder to see, but it doesn’t really solve the problem and still creates a lot of ozone,” he adds. Bottom line: “It’s a really bad idea to burn fossil fuels in an urban environment, whether you’re a character in a Dickens novel burning coal in your home or using a diesel bus in your city.”

Proterra’s buses rely on lithium titanate batteries and chargers, which can be installed both in the depot or on a route. Popple’s stated goal is lofty: Replacing every fossil fuel-run bus in the country, and on first glance, that target looks a bit far-fetched. Currently, Proterra buses sell upfront for about $800,000 a pop — between $100,000 and $400,000 more than many of their hybrid and diesel competitors. Popple’s history as an early-stage Tesla employee (he served as the company’s senior director of finance) helps paint Proterra as a luxury brand — destined, perhaps, for on-board juice bars and $6 fares a la San Francisco’s Leap.

And of course, that’s the EV’s classic conundrum, making unlikely allies of California media outlets and Republican lawmakers. As the simplified argument goes: Because they cost more, electric vehicles tend to go to the wealthy, meaning that areas with cleaner air and fewer localized emissions benefit, while areas with more pollution continue in smoggy business-as-usual mode.

But Proterra doesn’t want, in Popple’s words, “to create a nice little niche.” And several things do signal potential for widespread adoption — even in lower-income markets.

First, there’s a selection of state and federal funds — Popple mentions options from the FTA and federal DOT along with state- and city-level incentives in California, Illinois and New York, which tend to prioritize emissions-cutting programs. The U.S. DOT’s Low or No Emission Vehicle Deployment Program recently allowed agencies in Dallas; Duluth, Minnesota; Louisville and Lexington, Kentucky; and Stockton, California, to purchase Proterra buses. Currently, the company’s sales history — about 60 buses to 13 cities — is small, but from Stockton to Tallahassee, Florida, it doesn’t look like a who’s who of the nation’s wealthiest municipalities.

George Lorente, grants manager for the San Joaquin Regional Transit District in Stockton, says that the affordability of those 100 percent EV coaches actually depends on a few things.

“The buses are more out of reach for transit agencies that have budgeted for diesel buses,” he writes in an email, adding that diesel buses range from $400,000 to $500,000, while hybrid diesel-electric and CNG buses typically cost between $600,000 and $700,000. “For agencies that have been able to operate alternative power vehicles, such as hybrid or CNG, the cost of electric vehicles is getting very close to these type of technologies … particularly with [the] clean energy incentives many local governments are providing.”

Adding that the agency would not have been able to purchase its electric vehicles without a grant, Lorente says that the buses are relatively light on the operations side. The majority of the Stockton fleet is made up of hybrid diesel-electric buses, which “cost approximately 60 cents per mile to operate compared to 20 cents per mile for electric buses.” Diesel-only buses, he adds, cost about a dollar per mile.

J. Barry Barker is the executive director of TARC (short for Transit Authority of River City) in the Louisville area. He agrees that the buses cost less once that initial purchase is made.

Barker says that TARC was also only able to afford the “EBs” because of federal funding — but he adds that’s standard for many transit agencies, no matter the purchase. Whether buying a new all-electric or all-diesel bus, the federal government often provides 80 percent of the funding, while the local agency takes care of operations and maintenance.

Still, that upfront price tag remains high. For Popple, though, a second indicator of Proterra’s increasing potential is the technology itself, specifically the energy density of each battery.

“This is what solar went through about five years ago,” he adds, predicting similar cost decreases as the technology evolves.

Right now, the company’s still a long way off from the 70,000 diesel buses it aims to replace. But, judging by its roster of cities, it’s already thinking way beyond the luxury niche.

As Popple says: “I wake up every morning and my question is, ‘What is our path to scale?‘”