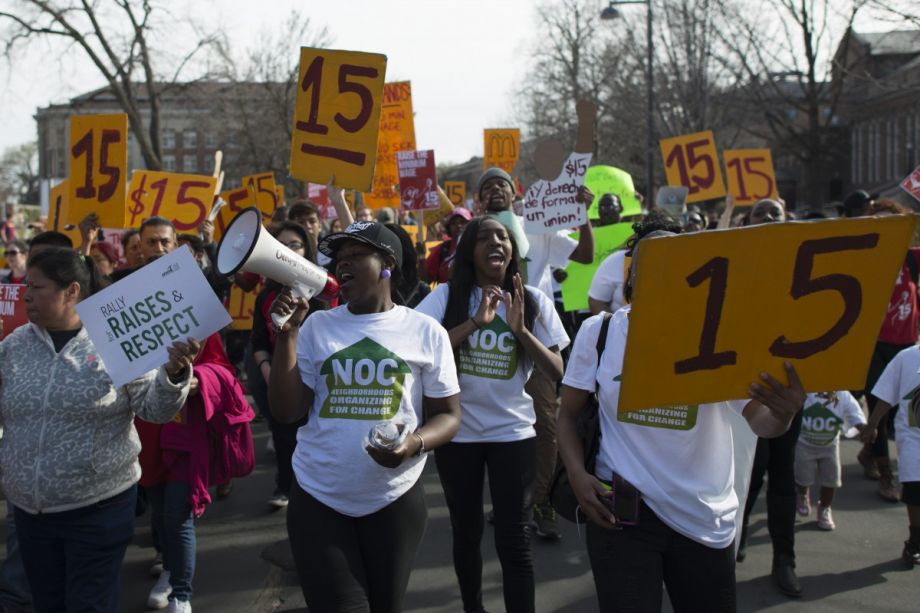 Fewer People Earn Less than $15/hr Today, But Those Who Do Are Increasingly Black and Hispanic Women

The share of Americans earning less than $15 an hour has fallen since the idea of a $15 minimum wage was introduced in 2012. But the people still earning under $15 are more likely to be Black or Hispanic women, a new Washington Post analysis of Bureau of Labor Statistics data shows.

But nearly half of Hispanic women and almost 40 percent of Black women were still earning less than $15 an hour in 2019, the Post said. As many as 32 million Americans would benefit from a minimum wage increase to $15.

Last month, Next City reported on the effects a $15 minimum wage would have on the housing crisis.

“The typical counter-argument against minimum-wage hikes is like, oh, it might hit the local economy very badly and destroy jobs and it’s even bad for workers, but my findings suggest that even if I take into account all these potential side effects, minimum wage [increases] still benefit workers,” Atsushi Yamagishi, a Ph.D. student who has studied the issue, told Next City.

The best way to get people out of poverty is to give them money, a new study of Stockton’s two-year basic income experiment shows.

Stacia Martin-West of the University of Tennessee and Amy Castro Baker of the University of Pennsylvania studied both the households who received $500 a month from Stockton and households that did not, The Atlantic reports. They found that the cash did not dissuade people from working — a typical Republican talking point — and in many cases helped people find work, by giving them the stability they needed to find a new job.

People tended to use the money on essentials or paying down debts. They also put it toward housing stability — one recipient told The Atlantic that her apartment had a fire, and the $500 from the city helped her afford a security deposit on a new place.

The group Tubbs founded, Mayors for a Guaranteed Income, is pushing for more basic income projects across the country, but ultimately, these mayors believe that a basic income must come from the federal level.

“These people are printing money, so the idea is the money is there, but the will is not there,” Newark Mayor Ras Baraka told Next City. “They’re finding money somewhere, giving it out, and arguing about who gets it. We’re saying this is where it needs to go, and we want them to understand it needs to be in perpetuity, not just a one off thing.”

A new emergency ordinance in Los Angeles will require large grocery stores and pharmacies to offer an extra $5 per hour in hazard pay for the next 120 days, ABC7 reports.

The increase will be required for all non-managerial employees at grocery stores or pharmacies with more than 300 employees nationwide or more than 10 employees on site.

“Cashiers, stockers, baggers and so many more have risked their lives every day since March making minimum wage to make sure we have everything we need to stay safely at home to get through this crisis,” Council President Nury Martinez said during the discussion of the ordinance. “While these companies have seen massive profits, it has not trickled down to their employees. These companies can afford to pay the hazard pay, they just don’t want to.”

LA City Councilmember John Lee, who is an independent but was previously registered as a Republican, cast the lone dissenting vote, calling the measure a “gross overreach of government into business and what they should be paying their employees.”

LA County’s board of supervisors adopted a similar ordinance Feb. 23. A hazard pay ordinance in Long Beach has been challenged in federal court by the California Grocers Association.