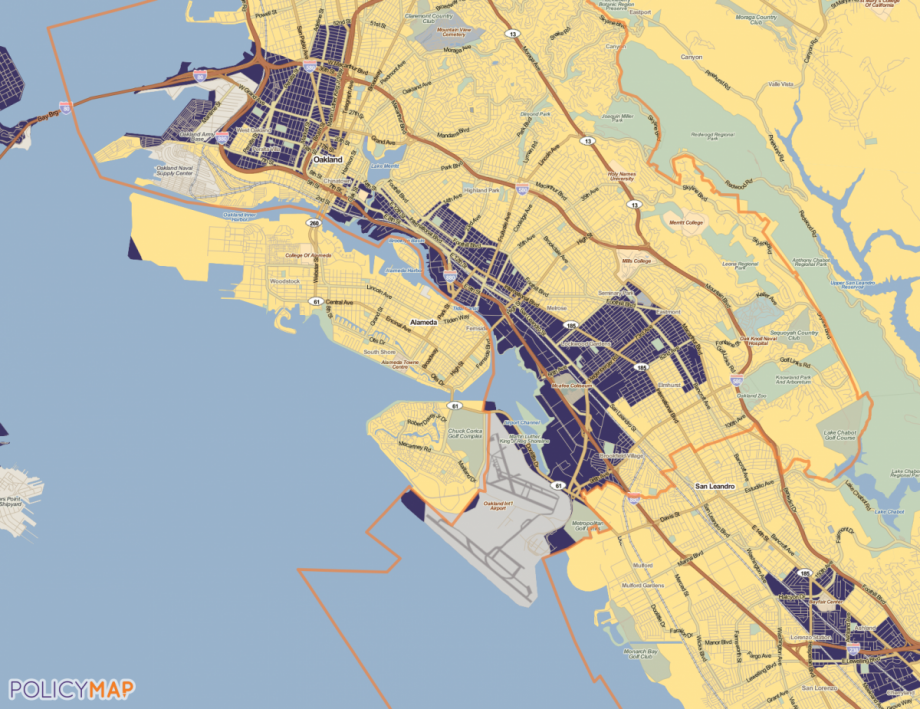 Opportunity Zones in Oakland and the East Bay Area (map via www.PolicyMap.com)

A new report from the Urban Institute finds that the Trump administration-touted Opportunity Zones have enriched real estate developers rather than the small businesses the program was allegedly designed to help.

The New York Times reports that the tax break, which as Next City readers already know, gives investors a break on capital gains taxes — or eliminates them entirely — if they invest the money into a designated geographical area known as an Opportunity Zone.

But the report finds that developers who took advantage of Opportunity Zone tax breaks would have proceeded with their projects even without the tax incentive, and that investors in the program are mainly interested in putting their money into luxury developments that have the opportunity to bring high returns, rather than affordable housing or small businesses.

“Although there are compelling examples of community benefit,” the researchers conclude, “the incentive as a whole is not living up to its economic and community development goals.”

At least four members of Congress have taken or benefited from Paycheck Protection Program loans, including Republican representatives who voted against transparency disclosures added to the program, Politico reports.

Rep. Roger Williams (R-TX), who owns auto dealerships, body shops and car washes, and Rep. Vicky Hartzler (R-MO), whose family owns multiple farms and equipment suppliers across the Midwest, took loans, and voted against a push to require the Small Business Administration to disclose at least some recipients. Rep. Susie Lee (D-NV), whose husband is CEO of a regional casino developer, and Rep. Debbie Mucarsel Powell (D-FL), who is married to an executive at a restaurant chain that has since returned the loan, both voted to support the disclosure requirements.

Politico points out that it is not illegal for lawmakers to take the money but it does raise questions about conflicts of interest.

At this point, the SBA and Treasury Department are refusing to disclose recipients of the loans, meaning that it is up to business owners to decide whether to announce that they have received PPP money. (Due to SEC rules, publicly traded companies also have no choice.)

Rep. Williams has received much of the scrutiny — he is one of the wealthiest members of Congress and received a PPP loan for an undisclosed amount for one of his dealerships, which employs his wife.

“If you’re a multimillionaire taking taxpayer money in the middle of the biggest unemployment since the Great Depression, get ready to explain that decision to the American people,” said Rep. Katie Porter (D-CA) in a statement.

Credit Unions Not Popular Among Young People, Study Finds
A survey of credit union members over 65 found that nearly two-thirds (60 percent) of their adult children don’t bank with their parents’ credit union, an indication that credit unions need to do more to attract younger members, Credit Union Times reports.

The survey was conducted by Access Softek, which makes online banking software, so the results could be taken with a grain of salt (especially considering that Access Softek’s recommendations to the industry include attracting young people with better online tools), but the survey results mirror other studies. A 2016 FICO study, for example, found that only one in five people under 25 use a credit union, and even fewer people aged 25-34 do.