Durban Finally Gains Ground In Its 100-Year Battle Against Sand 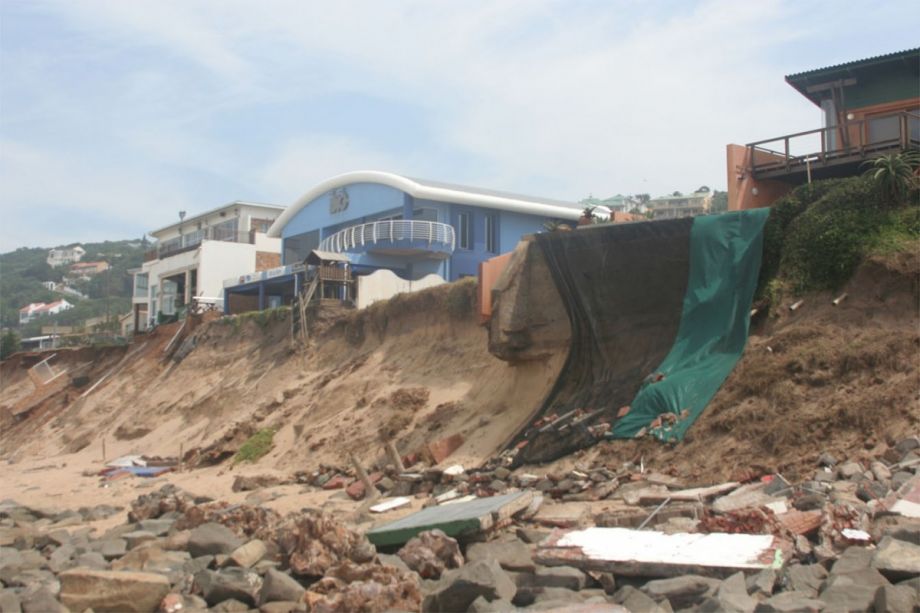 The aftermath of the storm that struck Durban in March 2007.

The massive storms that hit Durban in March 2007 weren’t remarkable by historic standards, but they were a wake up call for a vastly underprepared city nonetheless.

Pictures of devastation proliferated, and residents awed by the spectacle of their city being pummeled by the ocean. The city’s newspapers carried photographs of huge, 14-meter waves pounding the coast, ripping up roads, flooding the promenade and clawing at beachfront properties. The storms caused $14 million in damage to municipal property alone.

The destruction was caused by three cyclones – Dora, Favio and Gamede – swirling through the Indian Ocean simultaneously. Their force was so powerful that they changed the seabed profile and moved the sand bars that normally help reduce wave energy headed for the coast.

“The first two cyclones reduced our defenses. The third one was the biggest and smacked our coast,” says Andrew Mather, a civil engineer who specializes in rising sea levels along a swathe of Africa’s coastline, from Reunion to Namibia.

Mather has worked for the city for 27 years and is Durban’s project executive for coastal policy. He sits on the United Nations Intergovernmental Panel on Climate Change, along with 2,500 other scientists from around the world. The destruction caused by the cyclones was a turning point for Durban, he says. “The climate change guys say this is going to happen more often and with greater intensity, so we upped the scenarios and started modeling the threat.”

Amazingly, Mather says that until 2006 the city had done no work on climate change impacts at all. “We commissioned an initial study. After the storms of 2007 we updated our earlier research and widened the geographic basis, looking at our entire 97-kilometer coastline.” He and about 100 specialists from weather and water research organizations examined future shoreline positions and modeled the impact of a 300-millimeter, 600-millimeter and 1,000-millimeter sea level rise along the city’s coast at intervals of five meters. “I had to run three different models for various scenarios at 19,400 points.”

Their work helped produce a shoreline management plan that gives the city a framework from which to manage the effects of climate change. For instance, the plan recommends a setback line for development of 10 meters from the shore, a recommendation that hasn’t yet been fully adopted because of resistance from property owners. Drawing on detailed input from a range of experts, the plan also offers a comprehensive look at the city’s rivers, estuaries, mangroves and dune systems. It’s a complicated ecosystem and sensitive to changes.

Damming upriver, for example, has reduced the amount of sediment arriving at the coast, which has compounded an age-old problem in Durban: there’s not enough sand in the right places, and too much in others. Ever since 1896 when engineers cut a channel into Durban’s natural bay and made it a commercial port, sand has been collecting on the south side of the harbor. Ever since then various engineers, all famous in their time, have worked on sand bypass schemes, basically taking sand from one side of the harbor to the other to replicate the natural flow of the waves. According to Mather, 55 million cubic meters of sand has been moved in that time.

If it hadn’t been done the harbor mouth would have silted up countless times, and South Africa’s key port (70 percent of the country’s imports come through Durban) would have been choked. Mather says the city’s institutional knowledge of this problem goes back 100 years and has incubated considerable expertise in coastal engineering, much sharpened since 2007. Since then the city has sunk tens of thousands of four-ton bags of sand about six meters from the shoreline at strategic places, each at a depth of about six meters.

“Traditionally engineers favored concrete, but this tends to get undermined in the mobile, soft, sandy environment. So we opted for big sandbags instead – they sag into local erosion holes. The handling has been difficult, but they keep their integrity. Anything smaller and the waves would pull them out. They’re like a sleeping defense, a retaining wall against the sea.”

“In some areas we’ve rebuilt the sand dunes and put a synthetic fabric over them to help regenerate vegetation on the dunes and make them stronger,” he adds.

Mather says since 2007 the city has spent about a million dollars on research. It has done scores of modeling exercises using a variety of interdisciplinary skills to understand and predict how to deal with the effects of climate change on rising sea levels.

“You can’t climate proof, but you can be smarter, be aware of the risks and mitigate against them. The obvious manifestation is the huge waves whacking the coast, but it is way more complex than that. It involves rivers, estuaries, the port and a lot more.”