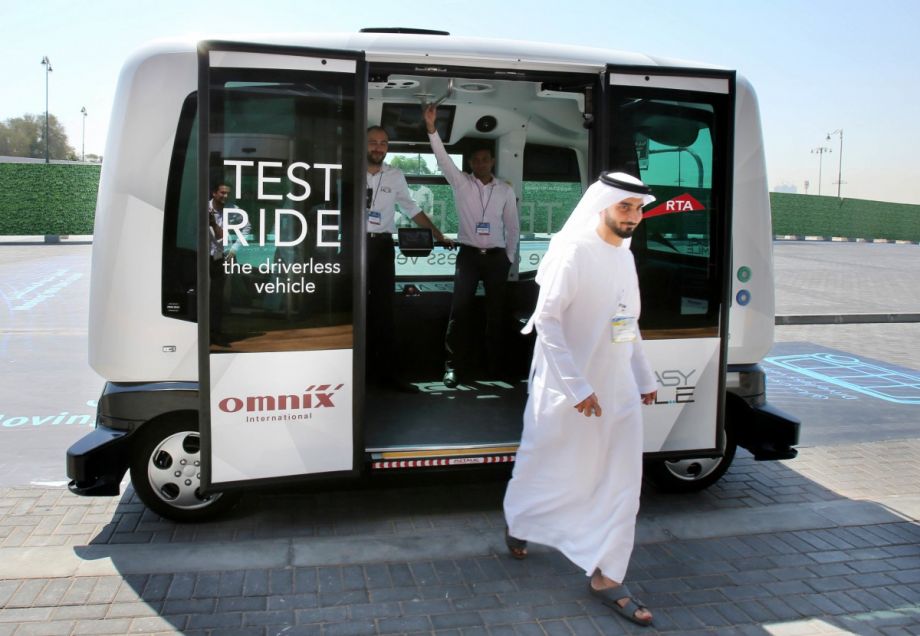 An Emirati visitor gets off a ten-seater driverless car after a test run during the second Middle East and North Africa, MENA, Transport Congress Exhibition in Dubai, United Arab Emirates, Tuesday, April 26, 2016. Dubai's ruler, Sheikh Mohammed bin Rashid Al Maktoum, announced plans at the time to have 25 percent of all trips in the commercial capital of the United Arab Emirates be by driverless vehicles by 2030. (AP Photo/Kamran Jebreili)

Driverless Cab Gets Put Through Its Paces in Dubai

The new year brings with it a new type of vehicle in one Dubai neighborhood: The autonomous taxi.

The Khaleej Times reports that Dubai’s Roads and Transport Authority and the Dubai Police launched a three-month-long test period for the emirate’s first driverless cab this past Monday (Dec. 31).

The cab will not pick up passengers during this trial phase, but will operate in regular traffic on the streets of the Dubai Silicon Oasis neighborhood.

The vehicle can carry four passengers plus a professional driver who can take over operation in case of an emergency. The cab can operate at speeds of up to 35 km/h (21.75 mph).

During the test period, the cab will operate on predetermined fixed routes within Silicon Oasis. Some passengers will be invited to ride in the cab during its trial run, and there will also be a preview event for the media.

In a report issued in the fall, Mattar Al Tayer, director-general and chairman of the RTA’s Board of Executive Directors, pitched autonomous cabs as a “last-mile solution” for public transport users.

“It will contribute to the integration of mass transport systems by facilitating the movement of public transport users, specifically Dubai Metro and Dubai Tram, to reach their final destinations,” Al Tayer said then.

At the end of the three-month trial, officials will analyze data gathered during the test to determine how best to introduce driverless taxis in other parts of the city. This project is part of an overall strategy to have 25 percent of all trips in Dubai using self-driving transit vehicles by 2030.

The rapid pace of metro system development in China continues with the opening of the first metro line in Jinan, reported in Metro Report International today (Jan. 3).

Four-car trains will provide initial service on the line. The stations can accommodate six-car trains, which if past history is any guide, will be needed sooner than officials expect. Work on the initial line began in 2015.

With the opening, Jinan, the capital of Shandong province with a population of 6.8 million, becomes the 35th city in China to have a rapid transit system. Two more lines are already under construction; Line R3 is set to open in January 2020 and Line R2 will open the following year.

Railway Age reports that the Federal Transit Administration has awarded Portland (Ore.) a grant of $1.076 million to examine potential development opportunities along a proposed 2.3-mile extension of the city’s streetcar network.

The extension would take three years to build and cost an estimated $80 million. It would also enable service to the Rose Quarter and Convention Center to operate twice as frequently as it does now.