Detroit Vying for X Games, Will the Economic Impact Stay in the City Limits? – Next City

Detroit Vying for X Games, Will the Economic Impact Stay in the City Limits? 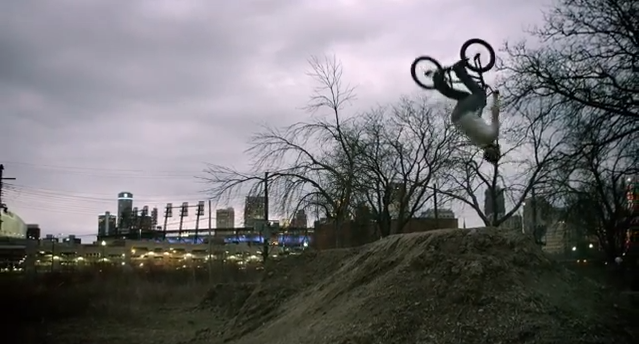 Video via X Games Detroit and The Work Inc.

Imagine a sporting event that brings in millions of dollars, uses preexisting infrastructure and doesn’t bully taxpayers to finance it.

Well, just like every misty-eyed entrepreneur who doesn’t actually live there will tell you: It’s happening in Detroit. Kevin Krease and Garret Koehler, two twenty-somethings that met in college at Miami of Ohio, have put together a bid to bring the X Games — ESPN’s extreme sports-themed answer to the Olympics — to the Motor City. In their PBR-guzzling vision, having the games in Detroit would raise the city’s profile without raiding the government’s coffers.

They’re using preexisting infrastructure, with the exception of a proposed new skate park along the riverfront, a 5.5-mile promenade along the Detroit River from the Ambassador Bridge to Belle Isle that is being continually developed by the Detroit RiverFront Conservancy. The goal is to connect the proposed skate park to the Dequindre Cut, an urban recreational path.

The bid video, which got Krease and Koehler into the final round of ESPN’s competition, shows four-wheelers and dirt bikes and skateboarders running free throughout the city, from Belle Isle to the crumbling Packard Plant. A rallycross car burns rubber in front of the iconic Michigan Central Station. A BMX biker throws a backflip at sundown, the Renaissance Center gleaming off in the distance. (Sadly, there won’t be any four-wheelers at the Packard Plant — “Liability, my man,” Krease said — but events will be scattered all over downtown, the riverfront and Belle Isle.)

“We’re not building much infrastructure, but reusing a lot of permanent infrastructure which is already in place,” said Krease, who is hosting a bid party with Beastie Boys DJ Mix Master Mike in Campus Martius tonight. “There’s been no discussion of any public financing for the event.”

A case study of the 2010 X Games in Los Angeles, conducted by the economic research firm Micronomics, found that the annual summer sporting event had a $50 million impact on the city.

In the ’90s, these sports were typically associated with affluent suburban kids whose parents built half pipes in their backyards and filled up the gas tanks in their dirt bikes. These days, it’s increasingly attracting more black and urban athletes. (Go outside in North Philly after dark on a summer evening and get ready for the roar of the ATVs.)

Krease and Koehler are up against Chicago, SXSW host Austin, Texas and Charlotte, N.C., already home to the largest ATV and dirt-riding park in the Southeastern U.S. Despite the tall odds, the two college buds are feeling pretty good about their chances.

Olga Stella, vice president of business development at the Detroit Economic Growth Corporation (DEGC), sees the potential of the X Games as a welcome and positive impact for the city, both in the short term and the long term. “A skate park ends up becoming infrastructure that gets left behind that benefits the larger community,” she told me. “And Detroiters are always looking for new and expanded recreational options and ways to utilize our public spaces to generate activity, so the kind of infrastructure that might get built for the X Games can then be used by regular Detroiters.”

It’s not just skate parks and dirt bikes, though. Stella championed the X Games as an excellent opportunity for Detroit small businesses. “They’re going to need vendors to support the games, local vendors,” she said. “That’s another opportunity to get Detroit businesses into that supply chain. And to get some of those contracts.”

But it’s how those contracts are awarded that will make the difference. Will corporate companies from Southeast Michigan win big catering bids, or will they go to local businesses that help increase the tax base? “It’s about structuring the procurement process with the X Games and helping to connect them to the resources that are here,” Stella said. Both Stella and Koehler cited the DEGC’s D2D program, which connects local businesses with buyers. “I think if the X Games come to Detroit that we would then sit down with the organizers and help them figure out their procurement strategy is,” Stella said. “And how small businesses can be a part of that.”

Krease and Koehler are aware that events like the X Games can perpetuate class divisions, which is why they intend to create a “citywide experience” with free programming — like a partnership with a local bike shop teaching kids how to work on their bikes — for those that can’t afford the ticketed areas. At least one of the events, possibly a halfpipe in Campus Martius, will be free to everyone.

But what does it mean for the city after ESPN packs up and skips town? Unlike the Olympics, the X Games won’t leave unused pools and tracks and rowing facilities to crumble along the Detroit River. The X Games is largely a tourist event and a weekend affair. But Stella sees long-term value in the global platform ESPN offers — the 2010 games were viewed in over 380 million homes in 175 countries, valued at $20 million to the city of Los Angeles — and the influx of people for one weekend each summer.

“If we think about where we want Detroit to be five or 10 years from now, we want there to be a vibrancy of activity in places all across the city, not just downtown,” Stella said. “And so, maybe after the X Games, there’s the next thing that looks at Detroit and kind of sees how it might be a good fit for its event. Hotels or small businesses and other vendors might support these events. And those kinds of businesses employ Detroiters and have a really important part for a vibrant economy and revitalizing neighborhoods.”

Terms like “economic impact” get thrown around every time a big event parachutes into town. Fifty million dollars is a lot of money, but will all that loot stay in the city limits to improve communities for the long term? By all accounts, the X Games are a terrific and welcome event for the city of Detroit. But Koehler and Krease are going to have to lean heavily on initiatives like DEGC’s D2D to make sure that cool $50 million actually stays in Detroit.