Reclaiming a Detroit Road, One Parking Space at a Time – Next City

Reclaiming a Detroit Road, One Parking Space at a Time 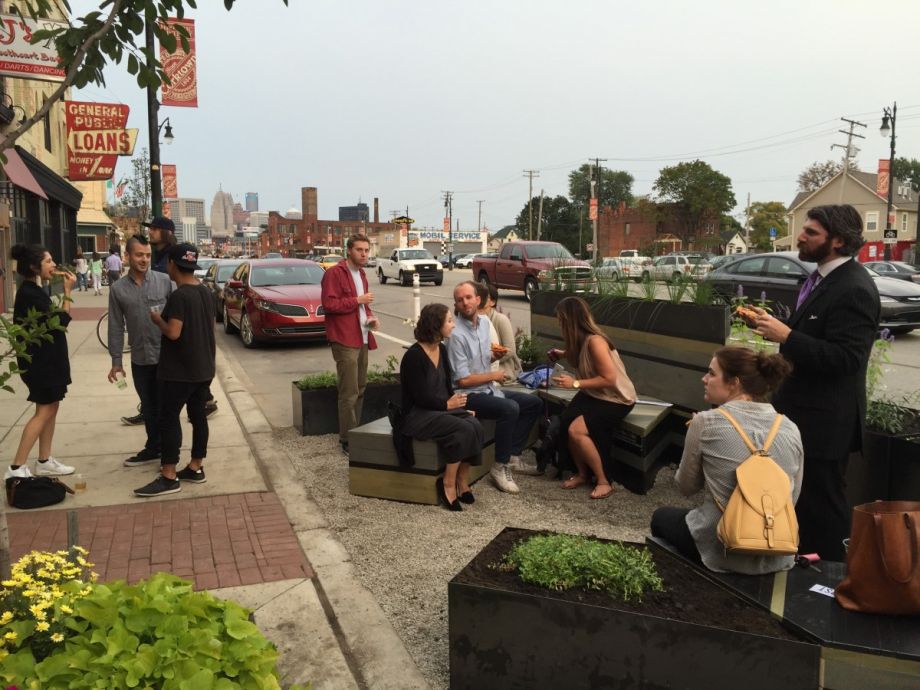 Michigan Avenue, one of several “spoke” roads emanating from downtown Detroit, is an impressively long thoroughfare that runs westward beyond the city limits for hundreds of miles to Michigan’s west coast.

But for business owners, residents and visitors in the Corktown neighborhood, the road’s width is an issue. Seven lanes wide and nearly 100 feet across, Michigan Avenue feels more like a freeway than a neighborhood Main Street. (Check out this fascinating post from the Corktown History blog about the widening of Michigan Avenue that occurred in the 1930s.)

“It’s not chill,” says Daisuke Hughes, co-owner of Astro Coffee, a shop on Michigan Avenue. “You can come here and relax, but when you go back outside and step into the chaos of Michigan Avenue, you start to feel anxiety.”

Corktown is a neighborhood in the midst of a commercial renaissance that began with the opening of now-famed Slows Bar B Q in 2005. In addition to Slows and Astro Coffee, several small businesses have opened along Michigan in recent years, including a handful of restaurants, a craft cocktail bar, a micro-distillery and a bicycle shop.

Yet the scale of Michigan Avenue remains a challenge. Crossing the street, which has limited crosswalks and no median, is like a real-life game of Frogger.

That disconnect is what inspired Chad Rochkind, principal at Human Scale Studio, to start thinking about ways to transform Michigan Avenue into a road that better serves its neighborhood and visitors alike.

Earlier this year, Rochkind traveled to Toronto as an 8-80 Cities fellow, where he spent four days participating in workshops on how to create places where anyone — from an eight-year-old going to school to an 80-year-old out for a stroll — can walk safely and enjoy the streets. He returned with $5,000 to spend on a project of his choosing, and he set sights on Michigan Avenue.

“The conversation started with the board of the Corktown Business Association,” says Rochkind, who was given the $5,000 grant from the Knight Foundation, which funded the fellowship program. “I presented them with a suite of tactical interventions that would fit into their long-term vision for transforming Corktown into a walkable neighborhood.”

Thus the People First Project for Michigan Avenue was born.

Next, Rochkind enlisted the help of 30 volunteers to survey Corktown’s parking situation. According to him, the survey revealed that the neighborhood has more available parking spaces than it has residents. Informed by that data, Rochkind and the business owners decided on the first of a series of incremental changes that they hope will result collectively in a calmer, more people-oriented street: a parklet, or a public space that takes over an on-street parking space, in front of Astro Coffee. 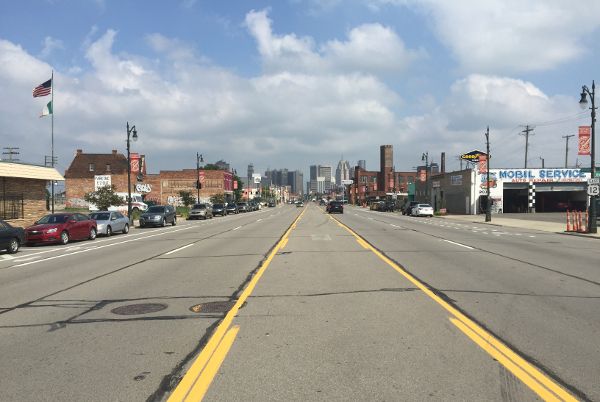 Wide Michigan Avenue can feel like a busy freeway to pedestrians. (Photo by Matthew Lewis)

Parklets aren’t new, but they’re new to Detroit, a city where the automobile is held in a special kind of reverence. Yet a small but growing number of street-calming projects are reclaiming roadways in Motor City for use by pedestrians and cyclists, not just drivers. On Jefferson Avenue, a road on the city’s east side very similar in character to Michigan Avenue, neighborhood economic development agency Jefferson East Inc. is leading the installation of medians and Detroit’s first protected bike lanes. In Greektown, a section of downtown Detroit popular for tourists, temporary interventions led by local architecture firm Virtuoso Design + Build have added sidewalk dining and bicycle parking to Monroe Street, which closes to motor vehicle traffic at night.

Still, the challenge of implementing such projects is real.

“The bureaucracy needs faster mechanisms for capturing the creativity of the citizens,” says Rochkind, who says that the People First Project decided to build the parklet without permits — a la tactical urbanism — after conversations with the Michigan Department of Transportation (the agency charged with maintaining Michigan Avenue) stagnated.

They installed the parklet in front of the coffee shop on August 28th.

According to a representative of MDOT, “[People First] submitted some ideas and MDOT answered back with some suggested changes before a permit could be approved, [and MDOT] believes the group took the ‘suggestions’ as being approval, and it was not. Permits are required by everyone for anything affecting an MDOT road.”

Just over a week after installation, a crew of MDOT workers dismantled the parklet.

“I received an email from MDOT at 4 p.m. on Friday, September 4th, saying I had 24 hours to take it down,” says Rochkind. He wrote back to MDOT asking for more time or their assistance. They obliged by sending a crew, which dismantled the parklet piece by piece.

“For three hours while they were tearing [the parklet] down, people kept coming up to them and asking why they were doing it. Some people were literally in tears,” says Rochkind.

Rochkind notes the irony of how speedily MDOT reacted in removing the parklet in comparison to how slow it was to enter a conversation about permitting it.

Rochkind is undeterred by the parklet’s removal. “It was never about the parklet,” he says. “It was about starting a long-term process for transforming Michigan Avenue.”

If anything, MDOT’s actions, he believes, have sped up that process. He says that Michigan State Representative Stephanie Chang’s office is on board with the People First Project, and he hopes to enlist other local elected officials in the cause.

“Because our project is incremental, we think we can actually add parking and public space to Michigan Avenue,” says Rochkind. He supports the introduction of more efficient angled parking to the streetscape, which currently only allows parallel parking. Adding shade elements to the street is also something People First organizers are exploring.

For now, however, Corktown’s short-lived parklet is once again nothing more than a space to put a car.