Delivering Camden from the Brink – Next City

Delivering Camden from the Brink 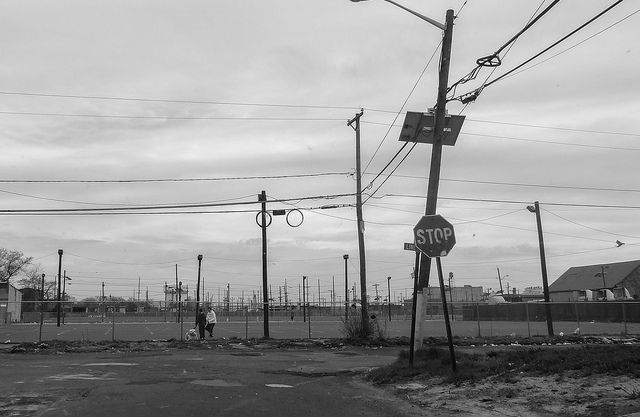 This is the first in a two-part series on redevelopment efforts in Camden, N.J. Part two will run tomorrow morning.

On more than one occasion in the second half of the 20th century, Camden, N.J. has been labeled “a city on the brink.” For the most part, the phrase has applied to something negative, like bankruptcy in the 1990s or, more recently, lawlessness after major cuts to the local police force.

But now, people in Camden maintain that the city is on the brink of something different — and unprecedented for a place that has fallen so far since the era when it was one of the country’s foremost industrial hubs: a revival.

In the past two years, major institutions like the Campbell Soup Company, Rutgers University and Cooper University Hospital have invested nearly a billion dollars toward large-scale projects in Camden, which could create upwards of a thousand new, permanent full- or part-time jobs in the city.

“Camden has reached a tipping point,” said Joe Myers, chief operating officer at the Cooper’s Ferry Development Association. Over the past decade, “There has been millions of dollars invested by the public sector into restoring and modernizing Camden’s infrastructure… and now private sector dollars are beginning to come into Camden at an increasing rate.”

Between 2003 and 2010, according to data compiled by Cooper’s Ferry, nearly 5,000 private sector jobs were created within Camden, bringing the total number of jobs in the city to 34,500.

“It’s been a process of putting the building blocks in place,” said Myers. “Now Camden is becoming a place where people want to live and work, and companies look to invest.”

From 1970 to 1979, Camden lost nearly one-fifth of its population, as 18,000 residents left the city for surrounding suburbs. The jobs followed. In 1984, for instance, electronics manufacturer RCA, which at one point had more than 10,000 employees, was acquired by General Electric and had its operations moved to Gibbsboro, N.J.

By the mid-1980s, Camden’s unemployment rate ballooned to over 20 percent. As the economic freefall continued, civic and community leaders came together to devise a strategy to reverse the city’s fortune. In late 1984, the Cooper’s Ferry Redevelopment Association was established as a private non-profit intended to rejuvenate Camden’s Delaware River waterfront, which was then nothing more than a post-industrial wasteland of abandoned warehouses and trash-strewn vacant lots.

Nearly 30 years later, the organization has directed over $600 million worth of private and public investment into downtown Camden. This process has included extending the city’s grid to the Delaware River, Myers explained, in order make the experience of the waterfront more welcoming to visitors.

However, over the past two or three years, the push to modernize Camden’s infrastructure has moved further east, away from the water and into areas of the city where crumbling roads and outdated utilities have, in the past, driven businesses away.

“There is still a lot to be done,” she added, “particularly in [eastern Camden], but Camden is reaching the point where it is on the verge of launching into a resurgence of economic activity.”

A rendering of the proposed Cooper Cancer Institute. Credit: The Cooper Health System

In the past, Camden epitomized the patterns of flight, disinvestment and decay that plagued cities across the U.S. Now, with millions of dollars coming from Rutgers, Our Lady of Lourdes Medical Center and Cooper University Hospital, Camden demonstrates another urban narrative: That of a city brought back to life by its educational and medical institutions.

“Most of the construction activity around the city, in a down economy, has been geared around the “eds and meds” — the hospitals and universities that are located within the city of Camden,” Myers said. “These types of large-scale projects are what Camden needs to create a critical mass.”

At the forefront of Camden’s eds-and-meds resurgence has been Cooper University Hospital. Founded in 1887, it is the largest employer in the city, and is seen as one of the core institutions that will help continue and enhance a nascent economic recovery.

In the 1980s, there was some pressure for Cooper to move out of the city, but “the board of trustees decided to stick it out and invest in its campus inside the city,” said John Sheridan, president and CEO of The Cooper Health System.

Sheridan said that in the last three to five years, the hospital has increased its efforts to lead revitalization efforts, investing nearly $700 million in the expansion of a health sciences campus.

There are three major facilities — two completed and one underway — included in Cooper’s master plan. Opening within months of each other, the Roberts Pavilion and the Cooper Medical School of Rowan University, costing $220 million and $140 million respectively, were the first two installments of Cooper’s vision for its expanded campus. The final piece of is the Cooper Cancer Institute, a $140-million facility scheduled to open in 2013.

These new facilities, according to Sheridan, will create over 500 additional permanent job positions. More than 400 medical students will be enrolled in the medical school within four years.

“These are the building blocks that will bring more private sector investment into the downtown,” said Myers, adding, “Camden is on the verge of reaching, and exceeding, its potential we have envisioned.” 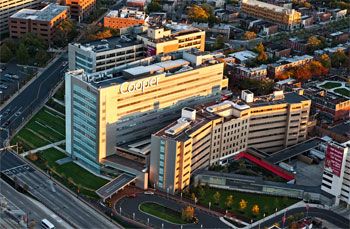 Less than a decade ago, Seventh Street was a desolate stretch of cracked asphalt and crumbling pavement, divided by a vacant lot. Today, that lot has been transformed into a focal point of the community. Children play on manicured grass and hospital employees eat lunch served by vendors lined along the smooth brick sidewalks.

“The whole streetscape project has completely transformed the neighborhood,” said Susan Bass Levin, president and CEO of the Cooper Foundation, the hospital’s philanthropic arm. “Rather than being a drug-infested corridor, Seventh Street is now a place where the community can come and congregate.”

The restoration began when, in 2009, the Cooper Foundation and officials from Camden County partnered to reconfigure the streetscape around Seventh Street, using $15 million grant from the New Jersey Department of Transportation. The rehabilitation underscores the collective recovery occurring in Cooper-Lanning, perhaps Camden’s most up-and-coming neighborhood.

Each of the eight streets that branch off Seventh Street and run through Cooper Lanning is now abuzz with activity. On almost every block, upwards of three or four houses are being renovated or rebuilt. More than 60 properties have been either rehabilitated or built in this part of the city since 2006, according to Bass Levin, most with the assistance of grants from federal and state sources as well as private organizations.

However, significant investment has also come from the private sector.

In 2011, M&M Development completed the Cooper Building, a 25-unit condominium located along Seventh Street in the heart of Cooper-Lanning, which was the first privately built condominium in Camden in 30 years.

With one- or two-bedroom units ranging from $121,000 to $138,000, Maria Yglesias, co-founder and owner of M&M Development, said that the building is geared toward middle-class workers and young residents who either work for or study at Cooper University Hospital.

Like nearly every completed development in Cooper-Lanning, the hospital played a part in making the Cooper building a reality.

Now, three years later, Yglesias said the project has been a complete success.

“Not only have we also physically changed the neighborhood with the Cooper,” she said, “we’ve enticed people to live in Camden and be pioneers.”

Beyond coordinating the rehabilitation of Cooper-Lanning’s housing stock, Cooper University Hospital is working to enhance other aspects of the neighborhood. At the end of July, the Cooper Foundation and the Knowledge is Power Program (KIPP), a charter school network, applied to become the sponsor of a new Renaissance school in Cooper-Lanning.

The two-phase plan, which has yet to be approved by the state, is to eventually sponsor the creation of a five-school campus to serve the surrounding area.

The first phase — which, if approved, would be completed by 2014 — calls for the opening of an elementary and middle school on a three-square-block tract of vacant land, formally occupied by the Lanning Square Elementary School, which has been moved many times in the last 10 years.

By 2020, Cooper calls for the opening of additional elementary and middle schools, as well as a new high school. All told, the entire project would serve nearly 3,000 students by the middle of the next decade.

“The entire Renaissance school project is a very important piece of the puzzle for the Cooper-Lanning neighborhood,” said Bass Levin. “The community has been without a neighborhood school since 2002, and this state-of-the-art facility will completely change the face of this part of Camden.”

Tomorrow: How the nation’s most recognizable soup company is investing in Camden to revamp the 40-acre brownfield surrounding its corporate campus.