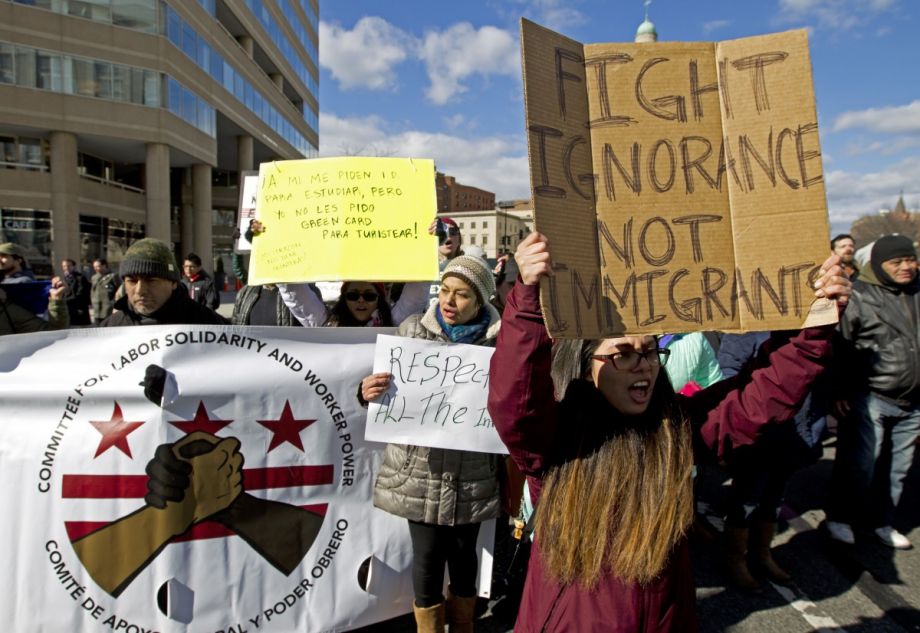 Supporters of immigrants' rights march downtown Washington, D.C., during an immigration protest Thursday, Feb. 16, 2017, in Washington. Immigrants around the U.S. stayed home from work and school that day to demonstrate how important they are to America's economy and its way of life, and many businesses closed in solidarity, in a nationwide protest called A Day Without Immigrants. (AP Photo/Jose Luis Magana)

Washington, D.C., has set aside $100,000 to help immigrants living in the District apply for citizenship, DCist reports.

It expands on a program called New American Workforce, in which D.C. and the National Immigration Forum partnered to help legal permanent residents (i.e. green card holders) by hosting seminars, one-on-one legal consultations, English lessons and civics instruction. Mayor Muriel Bowser first announced the partnership in 2017 when it was offered to employees of the DC government and their families. Since then the partnership has expanded to private businesses, DCist reported.

The new grant gives anyone who participates in the citizenship workshops up to $725 per person to fully cover the fees associated with the naturalization process.

“This fund will help new Americans reach their full potential as U.S. citizens, and all District residents will benefit because of its positive effects on the community and economy,” Ali Noorani, executive director of the National Immigration Forum, said in a statement provided to DCist.

The National Immigration Forum runs New American Workforce in eight cities including Washington, D.C., all places where there are large numbers of immigrants eligible for citizenship. The other seven are Los Angeles, New York, San Jose, Miami, Houston, San Diego, and Detroit. The program takes inspiration from Bethlehem Steel’s free English-language classes that it offered to its workforce, which it began to do in 1915, the Forum said. In the D.C. metro area alone, there are 286,000 immigrants eligible to become citizens, according to the Forum. (At $725 per person, the money will go quickly — it’s first-come, first served, the mayor’s office said, and only available to those who have participated in the Forum’s workshops.)

Mayor Bowser has come under fire from activists for her stances on immigration and sanctuary cities, although she supports sanctuary cities in general and has granted money to groups that offer legal services to immigrants. A week after Election Day 2016, she clashed with protestors for not affirming D.C’s sanctuary city status strongly enough. After that confrontation, Bowser held a teleconference with a stronger stance.

“We will stand in opposition, strong opposition, to any policies that threaten our values, while we continue to seek common grounds on things that will be helpful for our city, like getting more jobs, more pathways to the middle class and investments in our infrastructure to prepare us for the growth that continues to come our way,” she said on the call.

Since then, she has reaffirmed the District’s status as a sanctuary city, although as a district and not a self-governing state, the mayor’s powers are more limited than some.

In September 2018, an immigrant was taken from the D.C. courthouse and handed over to Immigration and Customs Enforcement, pointing to holes in the District’s sanctuary status, the Washington Post reported. The District’s judicial system includes federal employees that don’t have to adhere to the city’s sanctuary policies, the Post said. That’s how U.S. marshals were able to take Benjamin Ordoñez, an undocumented immigrant from Guatemala, into custody.

“We cannot let ICE come into our community and kidnap our loved ones and neighbors with help from DC police,” the Action Network tweeted, according to the Post. “This goes directly against Mayor Muriel Bowser’s promises that the DC police do not cooperate with ICE, and that DC is a sanctuary city.” The D.C. police quickly responded that they had had nothing to do with Ordoñez’s detention. Kevin Donahue, deputy mayor for public safety, told the Post that “tragic incidents” such as Ordoñez’s case “highlight the extent of the impact that D.C. not being a state — not being in control of our justice system — has on D.C. residents.”