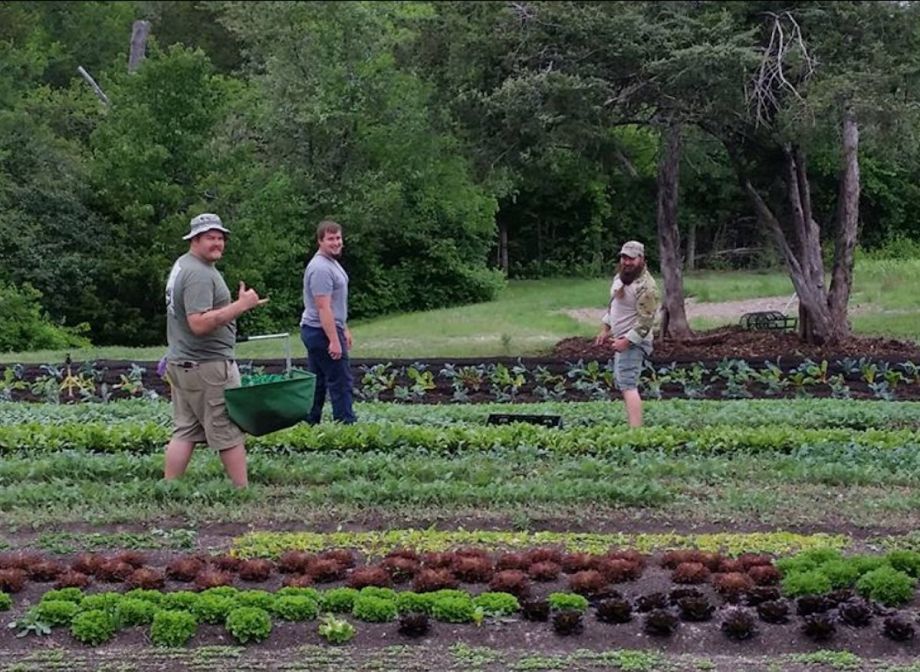 A neglected parking lot in the center of Dallas will be piled with dirt, planted with trees, and transformed into an urban farm where returning veterans can learn to work with the earth and receive support from fellow veterans. Nonprofit FARM (Farmers Assisting Returning Military) made a deal with the city to lease the paved-over city-owned parcel for the next decade at least, or until the city is ready to turn the plot into a park, its intended purpose under the Dallas Parks Master Plan. In the meantime, the farm will allow founders Steve Smith and James Jeffers to reach more veterans and to share a form of healing that’s worked for them.

According to Smith, after returning to civilian life after their time in the military, the two “found that getting our hands in the dirt was everything we needed. The dirt itself is healing. That was, in itself, therapy for us.” Jeffers hadn’t wanted to leave the military, but had been medicalled out because of both brain and physical injuries. Farming was good for the body and for the brain; he was learning something new every day. The two men started farming, first tilling up their own yards to feed their families. Then they began selling produce they’d grown to markets and restaurants through their first venture, Eat the Yard. In a bid to have as small an environmental impact as possible, they started collecting compost from the same restaurants they’d later sell veggies to.

“The whole time we were selling to restaurants and composting with them, we had guys from our unit, we were losing guys to suicide at a pretty staggering rate,” says Jeffers. They learned a grim statistic, which is today splashed across the first page of FARM’s website: 22 American veterans commit suicide every day, one every 65 minutes. They felt not enough was being done to help, and began conducting outreach themselves. They made it known they were a veteran-owned business, began driving out food to people who were isolated and not doing well. After losing two veterans in a week, they launched as a nonprofit, FARM, and set about trying to bring more vets into the fold.

“Basically we bring guys in who are struggling and reintegrate them through agricultural or dirt therapy, recreational therapy or actual therapy, here on the farm with a guy who does trauma resolution and memory resolution,” says Jeffers. “A lot of the guys just get isolated and don’t have anything meaningful to reinvest themselves back into. So just coming here to the farm and hanging out with other veterans who understand what they’re struggling with and digging around in the dirt and pulling weeds and harvesting vegetables, it’s usually a huge help to them.”

They run a six-month internship program that trains veterans to become farmers. Afterward, interns can stay at the organization’s farm or move on to partnering ones as farmers or educators. After two years of farming experience — a year less than civilians under the new Farm Bill — veterans are eligible for the federal loans that would help them buy their own farm.

The lot, which is in the center of Dallas, will give FARM new visibility, raise production and allow them to expand with a slate of paid employees. The plot is a little over two acres, layered with “asphalt on top of concrete on top of asphalt on top of concrete,” says Smith. In the hundred-plus years the city has owned it, the lot has been used for coal storage, auto washing and greasing, and has been a repair shop and auto impound and a municipal garage.

It’s slated for use as part of Dallas’ new master plan for parks but, says Ryan Evans, first assistant city manager, “We have the land, but we don’t have the money to develop the parks.”

In the interim, Smith and Jeffers proposed to build an “urban farm park” that would later be turned back over to the city, complete with the landscaping and other improvements they had made. “The city would get their park, and we would get our farm, and the community would have food, and we would use it as an educational tool to teach people how to grow food themselves,” says Smith.

The idea was embraced by the city council and by Brian Bergersen, the developer leading the changes at the Dallas Farmers Market. Just a few blocks from FARM’s new plot, the market was privatized in 2013 after costing the city hundreds of millions of dollars a year.

The FARM deal, though, was several years in the making, due to the nature of the lease and the site’s contamination. Because of its central location, the plot was valued at about $2 million. If the city were to lease it to a traditional business, Smith and Jeffers were told, it would cost about $28,000 a month. That spooked FARM off the idea for a while, but they countered by working with the city to show how much value they would be putting into the site, including building up soil, planting an orchard and constructing public bathrooms. In the end, they agreed to a lease of about $2,500 a month. The lease is for 10 years; FARM and the city each have two five-year renewals if both parties are still happy with the deal.

The city paid for soil testing, which indicated that about 20 percent of the property is contaminated and needs to remain under a concrete cap so that pollutants can’t leach into the produce’s roots. It’ll cost between $300,000 and $500,000 to remediate the rest, which will be paid for by FARM as part of their redesign. Essentially they’ll create a giant raised bed on top of a parking lot, using a physical barrier — a geotextile — to separate the soil from the asphalt.

The farm will also have an aquaponic and hydroponic operation, large greenhouses, several methods of composting, bee-keeping, chickens, a stage for classes and events, and a commercial kitchen. “More of a destination than a farm,” says Smith. The public will be welcome to enjoy some open areas in the farm, and there will be both self-guided tours and tours led by FARM veterans and employees. “That empowers them, it makes them feel good about themselves again. Most veterans were leaders in the military, and this gives them an opportunity to be leaders again, and teach,” says Smith.

He continues, “I don’t care what the lease is, $28,000 or $28 a month, it’s all worth it if we can be center stage in Dallas, and put veterans’ issues on the table, and have 500,000 people over the next 10 years come see what we’re all about.” Like gun violence, which breaks into the news cycle in horrific bursts and fades almost as quickly, high suicide rates among veterans receive intermittent media attention and then disappear, except for among those who have been affected, says Smith. He wants veterans, and their loved ones, to know that organizations like FARM exist. Because it’s not just the farming, or the recreational therapy, it’s knowing that support is there.