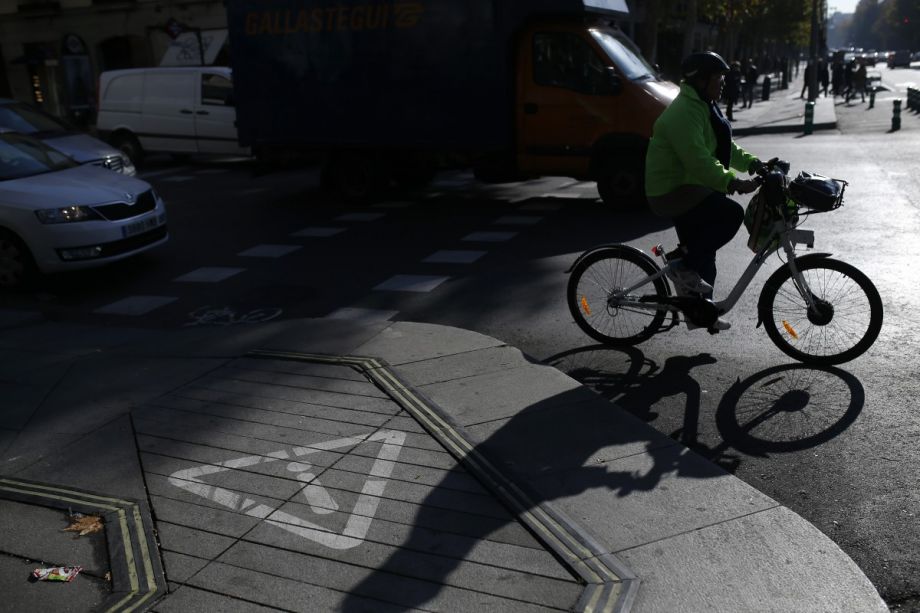 A bicyclist alongside vehicles in Madrid (AP Photo/Francisco Seco)

Despite little designated infrastructure, bicycle use in Madrid, Spain, has been steadily increasing at a pace of 15 to 20 percent per year since 2008. Yet the city’s plan to build 30 new bike lanes is being met with a chorus of criticism — from cyclists. Many are vocal in online forums where Madrid’s bike lanes are the topic, advocating for bikes and cars to share the same road space, and against the creation of segregated infrastructure.

The protesters say bike lanes increase accident risk for cyclists at intersections, pointing to bike lanes located on the right side of the road as especially troublesome with motorists making right turns. Some cyclists are also worried that if they are segregated spatially, they will lose the right to use the main road, whether owing to new regulations or pressure from drivers.

The opposition ranges from extreme — some brand all bike lanes “death traps” — to moderate. Among the latter is En Bici Por Madrid (EBPM), one of Madrid’s most influential cycling associations. “Bike lanes look good on straight segments, but they create unsafe situations for cyclists at intersections,” writes Miguel Samperio, a member of EBPM, via email. “There are technical solutions, but they come at a prejudice for pedestrians and cyclists.”

EBPM is also critical of the idea that bikes lanes per se can increase the share of cyclists. “It’s important to eradicate the idea that to promote cycling we have to segregate bicycles in their own lane,” writes Samperio. EBPM has challenged the motto of “Build it and they will come” by citing examples on its website like Stevenage, a British city with a large segregated cycle network that few people use.

Despite the current rapid growth in bicycle use, the number of daily trips in Madrid is still low by European standards. According to EBPM estimates, there are 110,000 daily bike trips in Madrid, well below other similar-sized European cities where cycling has skyrocketed after investments in designated infrastructure, including Paris (225,000) and London (570,000).

EBPM believes it’s possible to promote cycling without creating segregated bike lanes. “Cities like Florence, in Italy, have increased their share of cyclists without a bike lane network, simply by putting restrictions to traffic and parking,” writes Samperio, echoing the organization’s website. “We have to stop prioritizing motor vehicles and remind drivers that in the city, cars are guests.”

Current cycling infrastructure in Madrid’s city center is mainly limited to an 80-mile network of sharrows, lanes shared by cars and bicycles. They’re marked by a bicycle graphic and a 30 km/h (20 mph) speed limit sign painted on the road. Cycling associations have expressed overall satisfaction with them, two years after implementation, although usually while also noting that few drivers respect the speed limit.

Marta Serrano, civil engineer and expert in urban mobility, agrees that sharrows have had a positive impact when it comes to increasing the visibility of cyclists as legitimate road users, but she doesn’t think they encourage new riders. “A person scared of traffic will be as scared in a sharrow as in a normal lane,” Serrano says.

She supports the city’s plan to build separate bike lanes on major streets, but stresses that it has to come with other measures. “There should also be information campaigns and traffic calming plans to expand the use to surrounding streets,” she says.

In Serrano’s opinion, hostility to bike lanes is not as broad as it seems if you look past common online forums. She says “not all cycling associations are against bike lanes, and many potential users are not expressing their opinion.”

Opposition to bike lanes by cyclists may seem rare these days, but it actually goes back at least 80 years. In 1934, the first segregated bike lane in London faced strong opposition from cyclists. Those protestors shared a belief with today’s anti-bike lane activists in Madrid: that bike lanes give a false sense of security and curtail the right of cyclists to use the main road. However, a year after the London bike lane was opened, a survey showed that 80 percent of cyclists were satisfied with segregated lanes.

Perhaps the most notorious opponent to bike lanes is John Forester, the cycling activist who coined the term vehicular cycling in the 1970s. His 1976 book Effective Cycling set some of today’s standards on how to ride in traffic, including using the full lane when necessary, staying predictable at all times and following traffic rules. At the age of 87, he still keeps a website to promote vehicular cycling and condemn bike lanes.

In Serrano’s opinion, “limiting the discussion to make the case for or against bike lanes is too shortsighted.” In Madrid, the city plans to install bike lanes only on major streets. This means that both types of cycling, on separate lanes and with traffic, will have to coexist. In the best-case scenario, Madrid might end up benefiting from the best of the two worlds: boosting ridership and creating an environment where cyclists and car drivers share the road safely.