Cooking Up a Food Revolution in Detroit – Next City

Cooking Up a Food Revolution in Detroit 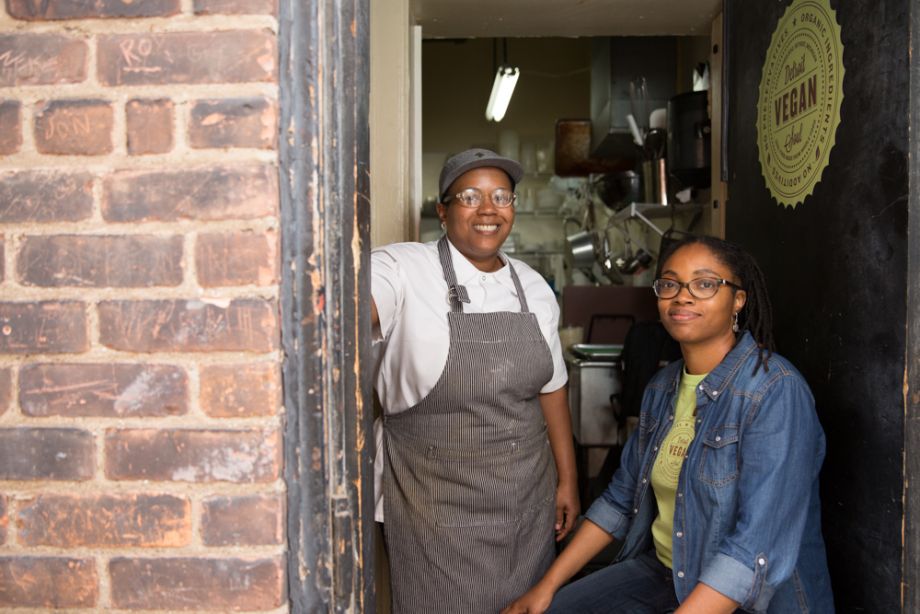 Detroit Vegan Soul owners Erika Boyd and Kirsten Ussery-Boyd first went vegan together around 2011. They were hoping to break the cycle of disease in their family and others. “Diabetes, cancer and all that. We wanted that trend to stop,” says Ussery-Boyd.

In order to really contribute to breaking that cycle, they knew they couldn’t go vegan alone. They had to win over family members, friends, anyone really with a family history of diabetes, cancer, high blood pressure and heart disease. African-Americans have disproportionate rates of diabetes and cardiovascular disease when compared to other ethnic groups — part of a legacy of injustice in the food system that has historically avoided investing in quality, healthy food options for communities of color while peppering those same neighborhoods with fast food establishments.

“We want to challenge people to look beyond the standard American diet and really help retrain people on what is value,” says Ussery-Boyd. “In your traditional soul food restaurant, you get this big huge trough of a plate, but that’s because most of the time the ingredients are really cheap, and they don’t have any nutritional value. When people leave our restaurant, they don’t always have leftovers with them because we’re not overfilling the plate, but they’re leaving satiated and satisfied and they’re full without that bloated feeling. That’s what we want people to experience, to rethink their relationship with food and understand the value of nutritional food.”

But shifting ingrained eating habits, even those influenced by external discrimination, is a tremendous challenge. To borrow a phrase from the late black feminist Toni Cade Bambara, the couple had to “make revolution irresistible.”

“We wanted to make food that’s familiar to people, isn’t intimidating, is really the opposite of what people expect vegan food to be — to break down some of that stigma and fear,” says Ussery-Boyd. “And you have vegan people who want something a little indulgent, that you can’t get every day.”

Like most successful revolutionaries, their process started within. Boyd decided to experiment with some old family recipes, converting them to vegan. The first dish: Southern-style chicken. Boyd recalls looking for ways to prepare tofu with other ingredients, “to have those flavors and textures we associate with fried chicken.”

Together, they spent about a year developing other vegan dishes based on traditional recipes, replicating those familiar textures and tastes while remaining conscious of nutritional value. By the time they started selling meals for delivery, catering events and doing pop-up shops, they had “catfish” tofu, barbecue tofu, smothered tempeh, soul platter with collard greens, and seitan pepper steak — now the main courses at their first sit-down spot in Detroit’s West Village neighborhood.

“Their menu is a source of pride, as it lifts up the daily diet that many African-Americans in generations past would enjoy, like nutrient-dense leafy greens and legumes such as butter beans and black-eyed peas,” says Devita Davison, interim executive director at FoodLab Detroit, where Detroit Vegan Soul is a founding member. “They are inspiring folks in the community to start thinking about incorporating a more plant-based diet, and they are a source of inspiration for many other FoodLab member businesses that aspire to use the power of their business to solve a health and/or environmental challenge in their community.”

They’re now building out their second sit-down spot, in Detroit’s historic Grandmont-Rosedale neighborhood, not far from where Boyd grew up. Everyone’s excited about it, from FoodLab to the Grandmont-Rosedale Development Corporation (GRDC), which has been campaigning for a new sit-down restaurant in a neighborhood where the only other options for eating out are fast food or take-out places selling mostly fried and fatty dishes. GRDC actually acquired the location from the previous owner before selling to Detroit Vegan Soul. Ussery-Boyd says they chose the neighborhood in large part because of the courtship of GRDC and the lack of healthy options nearby.

Everyone’s excited, that is, except for maybe the three regional banks that declined to provide Detroit Vegan Soul the capital needed to build out the location.

“It’s a complete gut job, going all the way down to the studs,” says Ussery-Boyd. “[The regional banks] weren’t willing to take the risk on us.”

Instead, they got most of the capital they needed, about $100,000, from the Entrepreneurs of Color Fund, which launched about a year ago as a partnership of the Kellogg Foundation, JPMorgan Chase and the Detroit Development Fund (DDF).

DDF was created in 1998, and provides capital throughout Detroit for real estate development and small businesses, including lines of credit that can be crucial for minority-owned contractor firms to take part as subcontractors on larger projects around the city. About 70 percent of its lending overall has been to people of color, according to DDF President Ray Waters. Still, due to the continuing barriers preventing people of color from accessing capital to start and grow businesses, Waters says the Kellogg Foundation approached JPMorgan Chase and DDF to create a dedicated fund for entrepreneurs of color. In the fund’s first year, they’ve closed 36 loans for $2.87 million, with one more loan approved and 10 more in the pipeline. Waters expects an initial $4.5 million in lending capital will be deployed by this August, and DDF is still raising capital for the fund.

“I think this could be a $10 million fund when it’s all said and done,” says Waters.

The fund will be revolving, so that as loans get paid back it will recirculate among other entrepreneurs of color. It may be necessary for the foreseeable future, given the current landscape of banking regulations. Waters isn’t optimistic that even a string of successful loans from the fund will convince banks to change the way they assess risk to make more loans to entrepreneurs of color in Detroit. In Detroit, as in cities all over the U.S., people of color have fewer assets and often credit histories that reflect a lack of having the cushion of assets to fall back on when times get hard. A new study from Demos found that two-parent black and Latino households have just half the median wealth of single white households.

Even the SBA’s loan guarantee programs are hardly helping to convince banks to lend to Detroit businesses of any race. According to SBA data, its flagship 7(a) program guaranteed only 73 loans in Detroit in 2016, compared with 207 in Cleveland, 235 in Cincinnati and 142 in Milwaukee.

DDF’s theory is that they can help businesses like Detroit Vegan Soul to grow their revenues and gain assets themselves, putting them in a position to eventually get a bank loan. The Entrepreneurs of Color Fund comes with support for pre-loan business planning and financial projections, as well as post-loan marketing or other technical assistance to follow through on revenue growth goals. They’re also considering taking a new step — reporting to personal or business credit bureaus to help entrepreneurs and their businesses build or perhaps repair credit as they repay their loans.

“We think if we can build a company to the point where it’s bankable, we can pass them off to a bank, it’s great for that company because they get a lower interest rate, they get the banking relationship,” says Waters. “At the bottom of everything we do, it’s been one of our major goals.”

Meanwhile, Detroit Vegan Soul will keep making the revolution irresistible, and they know they’re not alone.

“I don’t know what it’s like in other cities, but here, I’ve just seen a lot of other small business owners with ideas that have been able to make them come to fruition,” says Ussery-Boyd. “It seems like there’s a lot of opportunity here.”