Considering the Autocratic Cosmopolis in ‘A History of Future Cities’ 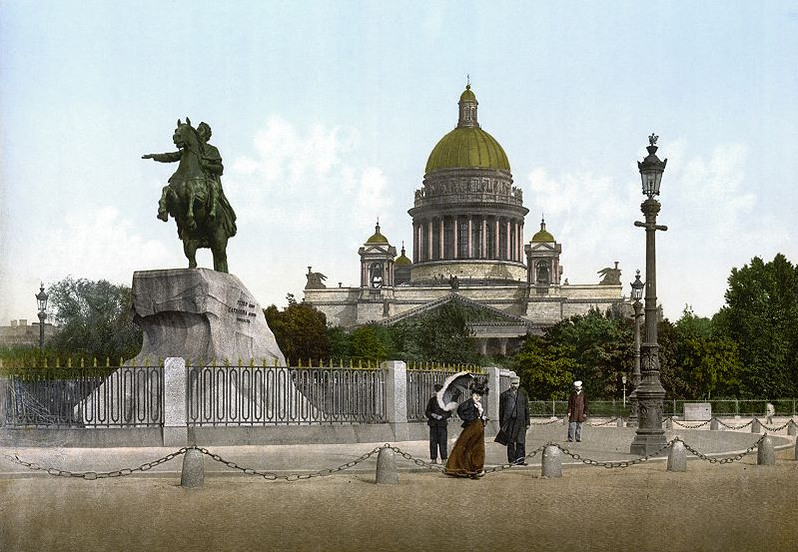 Russia’s Peter the Great did not allow serfs to use wheelbarrows while building the city of St. Petersburg.

“If only we could harness our new tools to serve us rather than we serving them and share the bounty we all produce, they believed, everyone could live a decent life.”

-Daniel Brook describing the thinking of Bauhaus architects, on page 161.

The cities of Shanghai, Bombay, St. Petersburg and Dubai were each built by autocrats with a vision of making their peoples more cosmopolitan and productive. Each of them succeeded, though the three older cities also fomented unrest that led to the eventual unseating of the regimes that built them.

Journalist and author Daniel Brook documents these stories in his new book from W.W. Norton and Company, A History of Future Cities. Right now, at the moment of the book’s publication, the three older cities have once again become more closed off than they once were. But Brook suggests that the channels abroad remain open, and that Shanghai, Bombay and St. Petersburg will once again become places where cultures intermingle.

Brook chose his subjects carefully, as the purest examples of cities built with a worldwide vision from the very beginning. Throughout the book he cross-references the historical stages of each city, so when he documents similar events in Bombay and Shanghai, it helps the reader make the connection. In fact, in Brook’s view, these cities are relevant to thinkers today, because what they have gone through will mirror what the whole world is going through as it continues to shrink daily.

In a way, I am worried he is right. As I read the book, especially the parts about Shanghai and St. Petersburg, I found myself making connections to the present political moment in the U.S., and not in a good way. More on that below.

These are stories of authorities with astounding power creating cities that stood out as stark counterpoints to the nations around them. The four cities changed the people who lived in them and, by extension, changed the course of nations. As a book of cultural tumult, it is also one filled with all sorts of historical oddities and strange juxtapositions, which gives the reader a greatly enriched sense of context for the last century (or so). The following is a list of some of my favorite ironies and oddities found in its pages:

A History of Future Cities merits reading simply because it’s so interesting, but it also gives a Western reader a great deal to think about. First, with so much emphasis on Easterners learning Western ways and profiting for it, one has to ask how soon the day will come when Westerners only progress when we go East to learn new ways of working? Or perhaps that day is already here and we haven’t admitted it to ourselves yet.

But that question is trivial compared to the next one. As an American, I found myself more interested in two terms from the book, each used only once, to describe leaders in states supposedly quite different than our own. The first term, “Market Bolshevism,” was used to describe the way economists, enamored with Chicago School thinking, facilitated a simplistic privatization of Russian assets and put the nation’s economy into free-fall (leading Russians to joke that everything Marx said about communism was wrong, but everything he said about capitalism was right). “Market Bolshevism” is a term that could just as easily be applied to the Grover Norquist crowd.

Which leads me to the second phrase, “Authoritarian Capitalism.” Brook used this to describe the Chinese ruling party’s philosophy that dissent can be managed so long as the economy grows at a nice clip. Similarly, as the book illustrates, power in Russia is largely a matter of who controls its oceans of natural gas, and its authorities use tactics — such as hiring supporters to speak on behalf of its projects at public hearings — which are already quite familiar to any American community organizer. This point is all the more haunting as more and more politicians crow about America’s new access to gas reserves.

In a country where more than 60 percent of the electorate can’t be bothered to vote — and those who do make their decision almost entirely on the question of which party they believe has best advanced the unexamined cause of economic growth — reading the descriptions of authoritarian capitalist systems in A History of Future Cities made this reader wonder if we aren’t already importing more ideas from Eastern authorities than we realize.

Brady Dale is a writer and podcaster living in Brooklyn. You can find him on Twitter. When you read A History of Future Cities, send us your thoughts on Twitter with the hashtag #NextCityBooks.