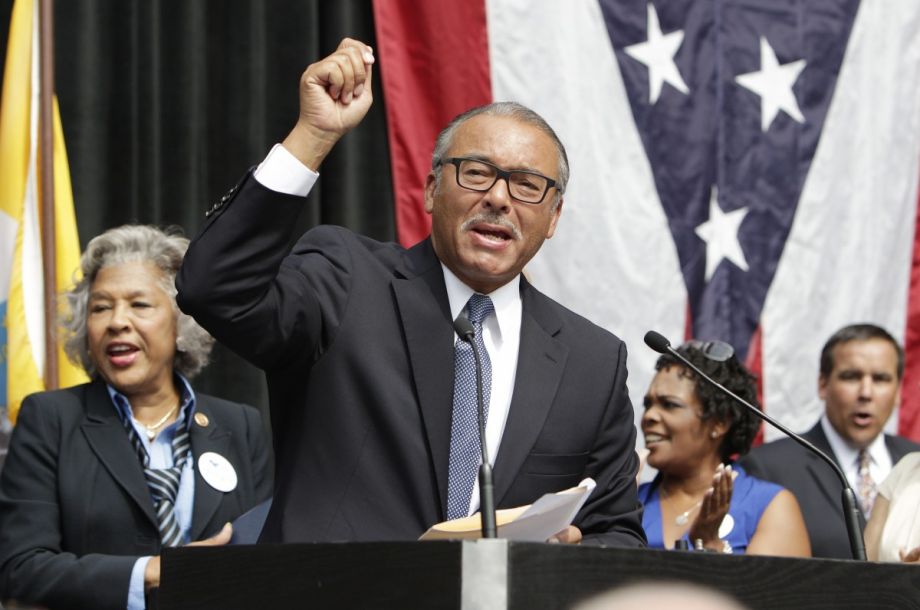 Columbus Mayor Michael B. Coleman, above, is leaving office in December, but the city is well on its way to meeting the goals of a 10-year economic plan set in 2010. (AP Photo/Jay LaPrete)

In 2010, civic leaders from the Columbus, Ohio, region launched a 10-year plan with an aggressive set of four goals: Create 150,000 new jobs; attract $8 billion in capital investment; increase per capita income by 30 percent; and be recognized as a national leader in economic development.

Five years in, the staff of Columbus 2020 has reason to pat themselves on the back. More than 100,000 jobs have been created so far. There’s been $5 billion in capital investment. And the per capita income in the region has gone up 14 percent. Colossal makerspace Columbus Idea Foundry is just one example of how the Midwest is capitalizing on the industriousness of its past to build cities of the future. (See this week’s Next City feature, “Cleveland Wants to Make Sure the Next Wright Brothers Come From the Rust Belt” for another Ohio example.)

Before becoming CEO of Columbus 2020, Kenny McDonald worked for economic development organizations in Charlotte, Albuquerque and Savannah. I spoke with McDonald about looking ahead to the next five years of Columbus’ revival.

How does it feel to be midway to 2020?
This decade has flown by. When we started, we were in such a deep well as a country. Columbus was never hit nearly as badly as some areas because of its economic diversity, but it was still a real issue. I’ll say that we are a lot farther along than perhaps we thought we might be nationally and in our region.

What are two successes in Columbus that other cities could learn from?
I think having a solid support and engagement with the business community is without a doubt the most important starting point. We’re strong believers in public-private partnerships, so having a public sector match or leverage those private dollars is critical. It really requires an intense focus to not only develop the resources on staff to do the work, but to remain disciplined and make sure that we are continuing to execute it all on a regular basis.

Ohio is a unique animal, to start with the state itself. Ohio’s long history of industry gives it inroads and connections and relationships around the world that is hard to replicate in most states. You have a deep reserve with contacts and connections just by the very nature of Ohio’s industries and history.

You have a very modest, typical Midwestern area where in general, people don’t like to make waves and talk about themselves, but that’s critically important for economic development. You have to stand up and say, “We’re good enough.” I think we’re learning to do that.

Is there a competitive spirit among different Ohio cities, especially with respect to talent and business retention?
In the state of Ohio, we’re a state of cities. You have lots of midsize cities across the area, evenly spread out with different economies, different histories and different cultures to some degree. If you think about it, it’s structured in a similar way that the U.S. is structured: States are competing with each other for jobs and investment, and they’re continually trying to get better.

What do you envision for the East Franklinton neighborhood, where the Columbus Idea Foundry is located, in 2020?
There are all kinds of areas across the region that were dormant economically. Now they’re starting to have life breathed into them, because the surrounding economic base is now so strong. If we didn’t have a strong base across the region, I don’t think that Franklinton could have been invested in. It isn’t just that times are picking up and we’re taking advantage of national growth. We’ve been really intentional about bringing new money into the region, and you might see Franklinton being one of the most vibrant parts of the region five to 10 years from now.

What programs or policies are helping Columbus’ low-income residents be better positioned financially five years from now?
Generating short-term opportunities to bring jobs and investments into our economy every day actually has a huge value. We shouldn’t take our eyes off of that for one minute. But we also can do more to build the capacity for future growth.

I look at the issue of inclusion as an opportunity. We have both rural and urban areas that are in some ways cut off both economically and from transportation. How do we advocate for the infrastructure to open up those areas and for workforce programming to make sure that the people in those neighborhoods are being connected to opportunities? While they may not be at their doorstep, we can make it a lot easier for those folks to get to and from careers.