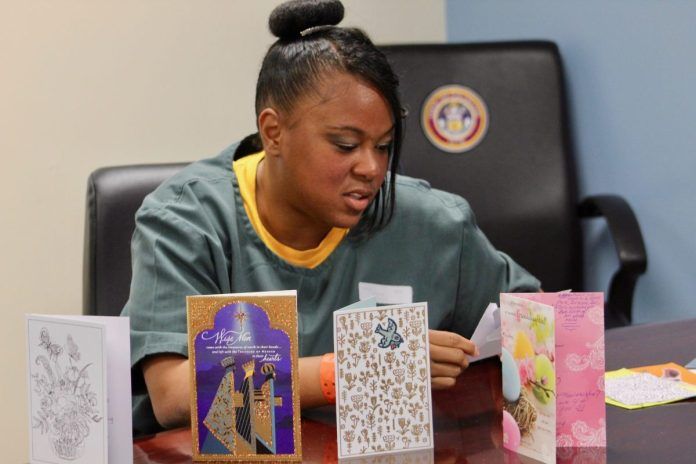 Tiffany McCoy, an inmate at the Denver Women’s Correctional Facility, pushed the Colorado Department of Corrections to end its ban on personalized mail. (Photo by by Alex Burness, The Colorado Independent)

“Cards mean everything to us. First, it’s that our family went and picked the card. Went to the store and thought about us and our favorite colors,” Tiffany McCoy, a 29-year-old inmate at the Denver Women’s Correctional Facility, told the Colorado Independent.

For obvious reasons, a photocopy of a hand-picked greeting card or of a drawing that a child sent an incarcerated parent simply can’t be an adequate stand-in for the real thing, yet that’s what Colorado prisoners had to settle for until earlier this month, when the state’s new head of the department of corrections, Dean Williams, lifted the ban on personalized correspondence.

In just the fifth month of his job, Williams told Next City that he ended the ban in part because of a lawsuit threatened by McCoy, in part because “there is a great deal of research around family contact and of course that’s one part of the basis of why I changed course and decided to allow original pieces of mail like greeting cards to be delivered to inmates.”

According to the Bureau of Justice Statistics, between 2005 and 2014, 68 percent of U.S. prisoners released were arrested again within three years, 79 percent within six years, and 83 percent within nine years. Yet, as Williams noted, relationships with family members can play a role in reducing recidivism by deterring future incidents of crime. A widely-cited, ten-year-old study found that visitation, whether its from friends or family, helps to both reduce and delay recidivism, especially when it occurs closer to the time of release. The authors hypothesize that social support helps returning citizens cope with stress. That study didn’t explicitly look at the role mail plays in recidivism rates, but advocates believe that mail can help, too.

“In prison, I think that contact with family — and that can be in the form of visitation or mail or cards — is a way of having their loved one’s voices in their heads, especially if they can’t necessarily hear those voices because they live far apart or visitation doesn’t match work hours,” explains Dr. Sheila Huss, a criminal justice instructor at the University of Denver. “So being able to receive mail from family is sometimes the only way inmates can have contact with their family.”

The role that McCoy played in allowing all Colorado prisoners access to those precious pieces of mail can’t be understated, according to Alexandra Parrott, one of the student attorneys on McCoy’s University of Denver College of Law Civil Rights Clinic legal team.

“She has family in Colorado but hasn’t had a visit in two or three years. The only way for her to talk to them was over the phone or through greeting cards,” Parrott says. “I think, generally, I can speak for the office that we’re really proud of Ms. McCoy. A prisoner going up against the department of corrections can be scary, but she was so incredibly strong in doing it and was able to make significant change for everyone.”

Before filing a lawsuit, McCoy’s team sent Williams a letter informing him that one could be coming down the line if prisoners weren’t allowed to receive the personalized mail sent to them. “It caught my attention,” Williams said. Appointed by Governor Polis, Williams previously oversaw progressive prison reforms in Alaska while serving as the superintendent of a juvenile facility before most recently holding the role of the commissioner of Alaska’s prison system. He’s said he has been inspired by Norway’s humane prison practices.

The other reason, though, that Williams was interested in overturning the ban was to press the reset button on the department’s relationship with the entities it encounters under his watch.

“There are many advocacy groups who many times are advocating for specific purposes and I want them in discussion with me. I want them in my office, in the room with me. I don’t want their first natural reaction to be ‘we should file a lawsuit against the department,’” Williams says. “When [the University of Denver legal clinic] sent the letter to me it was an opportunity for me to reflect and make a decision.”

“I think he responded within six minutes to our email,” Parrott says. The ultimate result was a complete rescinding of the ban on personalized mail, although the department does reserve the right to make changes in the future, like revoking access to greeting cards on an individual basis if contraband is found, which is why they were banned in the first place.

“Hopefully this is a sign that prisoners are starting to have more of a voice in their confinement,” Parrott says. “I think that because Ms. McCoy was able to make this change, hopefully it gives other prisoners hope to fight for the change they want as well.”