Collaboration or Competition? The Messy Geopolitics of Food Security – Next City

Collaboration or Competition? The Messy Geopolitics of Food Security 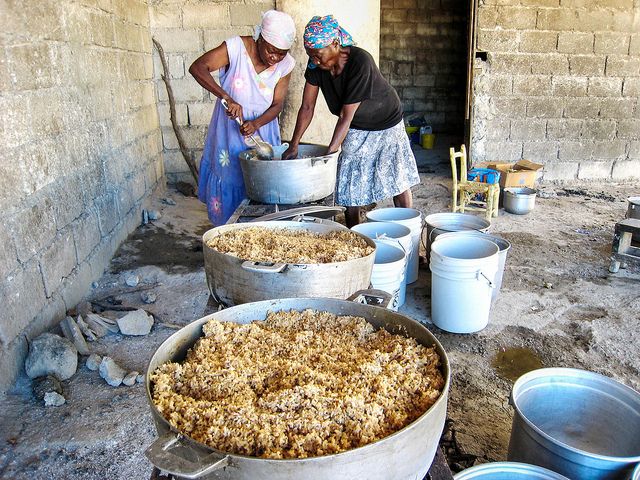 In reference to Cold War-style politics of food security, Eugenio Diaz-Bonilla wanted to make his argument clear: The globalized market means that no country can singlehandedly isolate another’s food market.

“The idea of using food as a weapon did not work as such,” Diaz-Bonilla, a senior research fellow at the International Food Policy Research Institute, told his audience at last week’s Feeding Cities conference in Philadelphia.

That statement, which moderator Neal Peirce of the Washington Post asked Diaz-Bonilla to repeat and affirm, started a Friday panel that was a little less fiery than one may have hoped, given the divergent views represented and the rather ferocious power politics inherent in food security issues.

Diaz-Bonilla outlined three possibilities for the future. The first was grim: The geopolitics of food scarcity, with war, climate change, soil erosion, rising sea levels and contaminated aquifers, all compounded by political instability and noncooperation between global powers as the world population keeps skyrocketing. The second was the “rosy” option, in which technology solves supply-side crises and global collaboration flourishes, with China and the U.S. working together to address the world’s food challenges. In short, as Diaz-Bonilla put it, “Everything is fine… and then the tooth fairy comes and gives you $20.”

The third and most likely model, Diaz Bonilla said, is “muddle through geopolitics,” where the world stays messy, some collaboration happens between major players and some political crises continue.

Generally, geopolitics continues on as shakily as ever, with blips of crisis and optimism alike. Caitlin Welsh, a foreign affairs officer in the U.S. State Department’s Office of Global Food Security, highlighted the commitments of G-8 and G-20 countries to ensuring food security, which resulted in the creation of her office and the disbursement of billions of dollars in aid. But the U.S., of course, has a tumultuous history with food aid, with some of its programs — like the donation of subsidized grain — having undermined, rather than strengthened, national agricultural industries and markets. (See Haiti’s decimated national rice productivity, for example.)

Jim Harkness, president of the Institute for Agriculture and Trade Policy, addressed the issue from the viewpoint of small farmers, who, if we can generalize, are usually at odds with big government, big agriculture and big corporations. His narrative history of the geopolitics of food highlighted the corporatization of agricultural markets and the excessive ties between food prices and oil prices as a result of a dependence on big agriculture and specialization. Harkness argued for more emphasis on small farmers producing diverse crops, rather than on how to distribute massive amounts of centrally produced food.

Harkness also raised the issue of land grabs, which would have been a fitting moment to ask Diaz Bonilla again about food as a weapon, or to ask Welsh to elaborate on the contradictory policies of some of the countries with G-8 commitments.

“Land grabs” have gained in prevalence since the food crisis of 2007-2008, as countries with smaller amounts of farmland buy up huge swaths of land in African and Latin American countries. Many do so through corporations, though the issue is wrapped up in policy, as countries advocate for land title reform in developing countries to make the acquisition of such land easier for private investors.

GRAIN, a non-profit supporting small farmers and their social movements, has been one of the leaders in the documentation of land grabs. It recently published a scathing critique of the G-8 policies, arguing that those promoting local food production — which include land law reforms — are blatantly opening the door to corporate land grabs. According to GRAIN, this will further undermine the ability of locals to feed themselves.

Harkness cited GRAIN in his presentation, yet didn’t ask any of these questions of his fellow panelists.

Global powers are major players in global food systems, and there are major questions about how to balance the capabilities of rich, centralized, subsidized agricultural organizations with the needs of small farmers and the reality of a growing global appetite. Even if we’re just muddling forward, it would have been fun to see a little more fuming.