How Trees Can Make City People Happier (and Vice Versa) 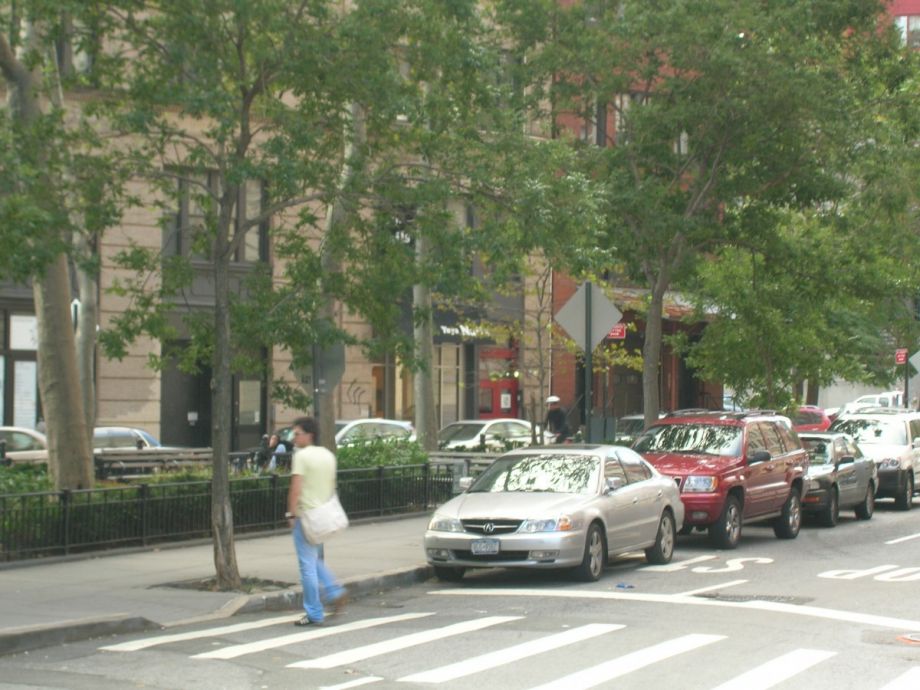 The trees out my fourth-floor New York City window were covered in snow a few days ago; now their bare branches are waving in the wind, against the gray-blue of the cloudy dusk sky. It’s nice to have them there. Without the trees, my view would be starker, nothing but flat roofs still white with snow and the rectangular outlines of overlapping buildings farther in the distance. They’re calming — something big and beautiful, that wasn’t made entirely by human hands, in a city full of people.

There’s plenty of evidence that hints of nature help us humans live in the urban spaces we’ve built. About five years ago, one major study showed that, across the world, living in cities is associated with higher levels of depression and other mental health problems; a rash of studies since have shown that people feel like green spaces — parks and community gardens, usually — help them deal with the stresses of urban life.

Mark Taylor, a public health researcher at the University of Trnava in Slovakia, wondered, though, if there might be a way to establish that connection between nature and mental health without relying on people’s own accounts of their well-being. “There’s been a fair bit of research that looks at different ways in which people say they feel some kind of benefit of being around natural spaces,” he says. “But nearly all of that was subjective.” You can ask people if they feel better, he says, and plenty might say they do. But how to know for sure?

Taylor decided to take advantage of the wealth of public data available in England, where he’s originally from, to see if that connection held. He and his colleagues collected data on two variables: the density of street trees and the number of antidepressant prescriptions in London’s 33 boroughs. (The boroughs average about 20 square miles, with about 250,000 people each; they’re almost small cities of their own.) What they found was that, even after adjusting for factors like unemployment and affluence, the areas that have the most trees along the streets also had fewer prescriptions for antidepressants. (Their results are reported in the journal Landscape and Urban Planning.)

“We can’t say that if you plant an extra 20 trees on every street, everyone will be fine and there will be no mental health issues,” says Taylor. “This is one more factor to consider. It does seem like people are happier when they have some access to this kind of thing.”

But are trees happy living in the city? We ask a lot of our urban forests: They modulate our moods, they shade sidewalks and buildings, they suck up carbon, and they drink the water that runs through the streets after rainstorms. Plus, they have to live with us, in these weird environments we’ve created, where they compete with buildings for sunlight and with wires and pipes and subway tunnels for space underground.

Jess Vogt, a visiting assistant professor at Furman University, in South Carolina, is what she calls a “trees and people” researcher. She’s interested in how trees and humans live side by side and looks at tree outcomes, people outcomes and the effects they have on one another. One of the main questions she has been trying to answer over the last few years, as she was working toward her Ph.D., is: How can people help street trees thrive — and vice versa?

Her project started in Indiana, when Vogt was a grad student there. Keep Indianapolis Beautiful had long wanted to know more about the impacts of its neighborhood tree planting projects. The group, a nonprofit founded in 1976, had heard stories from the neighborhoods they’d worked with, that tree planting had led to bonding and barbecues, says Vogt, and they wanted to know: How well were their planted trees doing? And does tree planting lead to other social goods?

Indianapolis is relatively flat, and not very dense. Neighborhoods right outside the densest part of downtown might be filled with small homes on narrow lots. Vogt and her colleagues looked at these neighborhoods, as well as more suburban-feeling parts of the city — where cookie-cutter development might have been designed with few trees — and wealthier, well-treed areas. Some of the trees they examined were on tree lawns or boulevards. Some were planted on the edge of a retention pond, or a two-lane road. Some were planted between a neighborhood and a highway, to dampen noise.

All in all, Vogt and her colleagues looked at 35 projects, in 25 Indianapolis neighborhoods. They documented whether 1,345 trees had lived or died and looked more closely at 616 trees, to see how they’d grown.

One thing the researchers were looking to determine was what sort of variables led to tree success. Much of the research on urban tree growth and survival has been done in greenhouses or focused on the trees’ growing environment. But Vogt and her colleagues were interested in the impacts that people, out in the real world, would have on the trees too. So they considered variables connected to the trees themselves (like species, the nursery they came from), the trees’ environment (its growing space, soil conditions); the community itself (homeownership, experience planting trees); and the contributions of institutions (pruning, mulching).

What they found was that all four of these components were connected to growth and survival. In other words, the trees’ quality of life wasn’t just influenced by its immediate surroundings, but by the people they interacted with.

What type of tree was planted didn’t matter at all, for survival, for instance. But variables connected to the community, like the percent of people who had moved in within the past five years, did.

And, their study found, the watering strategy the community took up also made a difference. Overall, trees that were cared for by communities that watered collectively did better. But Vogt and her colleagues also found that the watering strategy neighborhoods chose mattered for their own thriving too. Communities that chose a collective watering strategy tended to be ones that had come together less often in the past for block parties or crime watches. But after they started caring for the trees together, they started organizing other community events more often.

Vogt is now working on expanding the project to Atlanta, St. Louis, Detroit and Philadelphia to look at, for instance, what happens to the same type of tree, in different cities. But one of the main conclusions of this work so far, she says, is that there’s not always one strategy that works best to help trees thrive in the city