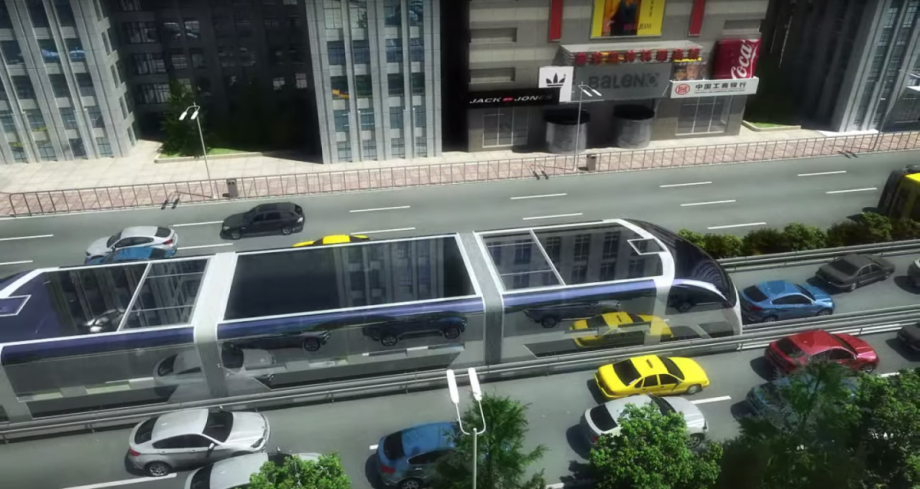 The Transit Elevated Bus was pitched as a way to carry passengers over traffic on existing roadways. (Credit: China TBS via YouTube)

China’s notorious “straddling bus” was made for social media. When the futuristic idea was tested in Qinhuangdao last year, a video of it sweeping over lines of congested cars went viral.

Unfortunately, it appears that the bus was not made to actually carry passengers in the 3-D world.

According to BBC, the project was scrapped last month amid growing speculation that it was “no more than an investment scam.” Police are working to recover investors’ assets and 32 arrests have been made, including Bai Zhiming, CEO of the Transit Elevated Bus Company (TEB) and founder of peer-to-peer financing company Huaying Kailai Asset Management. Thirty-one Huaying Kailai employees were also arrested.

“Investors had reportedly been offered returns of 12 percent if they put money into the project, but allegations in the Chinese media had said it had been a way of luring them into buying financial products,” BBC reports. “China has seen a series of scams where online platforms offer big returns on money invested into startups, an area mostly ignored by the country’s state-run banks.”

The bus was pitched as being a “cheaper, more effective way to reduce traffic congestion,” Jen Kinney wrote for Next City last year.

“With a carrying capacity of 1,200 people at a time, the TEB has the same functions as the subway while its cost of construction is less than one-fifth that of the subway,” Zhiming told CCTV News at the time.

But critics were skeptical, and questioned the expense of installing tracks and stations and whether tall trucks would get stuck underneath, according to the New York Times.