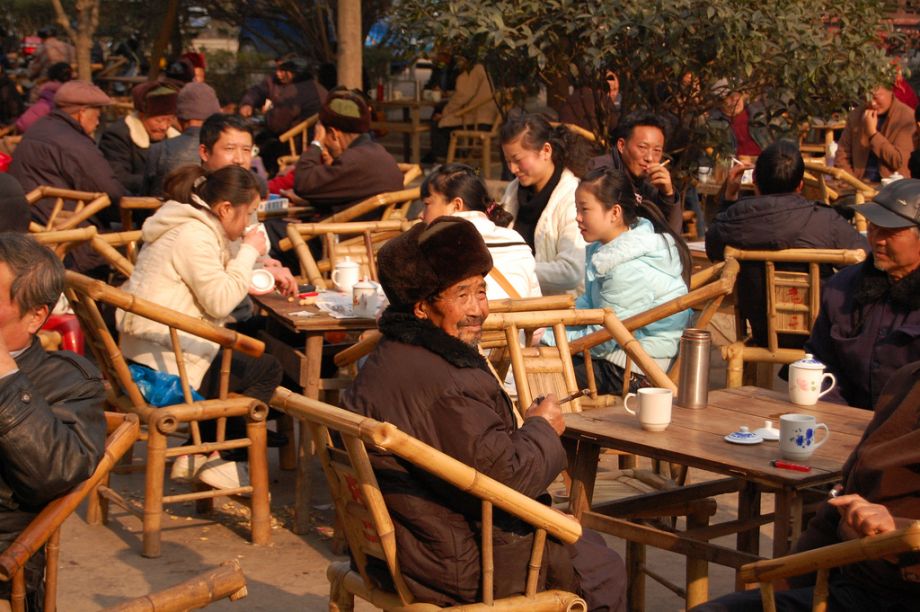 A tea house in Chengdu. (Photo by unkle_sam via Flickr)

Guide books to Chengdu always mention the tea house culture. The famous teahouses provide a backdrop to a visit to an operetta, a trip to get your ears cleaned, or simply a midday break for a cup of good green tea. But such teahouses aren’t merely a quaint place to cool your heels. For locals, they perform a vital function: keeping Chengdu’s identity alive amid the galloping pace of change.

The guide books point visitors first and foremost to the Heming Teahouse, in the center of People’s Park, and rightfully so. Steeped in history and local culture, Heming has remained staunchly local despite the influx of tourists. As local as one can be in today’s China, anyway, where few bricks older than a generation or two haven’t been ground into dust. Today, “staunchly local” means Heming serves only local green teas made with hot water poured from long-spouted copper pots specific to Chengdu. Patrons wile away the day playing mahjong and nonchalantly getting their ears cleaned by a bewhiskered old man in Sichuan opera colors.

Two stories about this teahouse. In 1911, when the Qing Dynasty fell following a nationwide strike, the spark came from here, the Heming teahouse, when Sichuanese rioted against the government’s cooperation with an English railroad company. Also, before the Qing fell, this teahouse was where teachers and professors hung their credentials from the rafters and waited for students to approach them. Appealing to a teacher was an incredibly social experience. Parents and students crowded around to listen to lectures, professors eyed each other over steaming green tea, and money flowed from one side of the teahouse to the other.

When the Cultural Revolution began, the first thing the Chengdu authorities did was close all the teahouses, claiming they were a refuge for heretics and witches. In 1989, when the entire country convulsed yet again, and riots rippled out from Tiananmen, Chengdu was the center of major conflict. The authorities took over Tianfu Square, beat and killed protesters by the Jinjiang Hotel, and closed all of the tea houses.

The thing about Chengdu tea houses, and Chinese discourse in general, is that it is much more vibrant than outsiders imagine. There are certain safe zones where anything can be discussed or addressed, and tea houses are one of them. Of course, if the government wants to arrest you, holding up a glass of green tea isn’t going to protect you. But there is a reason why Chinese call an interview with the police “being asked to tea.” The tea house is where old men can rave about Mao, the lack of culture and soul in today’s society, the depravities of the rich and the weakness of the younger generation. It’s also where cops can sit a dissident down and give him a chance to repent before sending him to the gulags.

Tea houses are a bit like social media in that respect. Although there have been revolutions staged out of tea houses, the major purpose of the teahouse — besides of course drinking tea, playing games and chatting about nothing — is to provide the populace with a source of information and an outlet for grievances.

Traditionally, tea houses were the only source of information for people in Chengdu. Before phones and the internet, word-of-mouth passed between sips of tea is how people learned. That has not changed. Will this neighborhood be demolished like all of the others? Learn the answer in the local teahouse. Did you read about the U.S. spy plane that brushed our Chinese fighter jet? No? Well then head over to the tea house and you’ll hear all about it.

There is a communal strength in China that belies decades of chaos and change. Much of it is in the bones of the people: centuries of doing things a certain way has bred … a certain way of doing things. Such as gathering at the tea house. The ability to maintain continuity as a society is, after all, the very definition of resilience. There are tea houses in every village in Sichuan. Every neighborhood in Chengdu has a tea house. There is a tea house in every one of China’s newest, most dynamic developments.

And there is not a home in Chengdu, in which an older man lives, that does not have a box of cheap Sichuan green tea and a mug so brown from years of use that it must be carcinogenic by this point. Tea drinking is such an integral part of the culture in Chengdu that is has it’s own slang, a dozen ancient techniques for how to pour, how to drink, when to drink. And it has a clear purpose: reminding Chengdunese that they are from Chengdu, that they love to chat and drink tea. They may be lazy, but there isn’t a topic on earth they won’t discuss. And if the authorities get out of hand, they’ll get invited out to tea and reminded of where they come from, and who they are.