Chicago Riverwalk Is More About Seeing Than Being Seen – Next City

Chicago Riverwalk Is More About Seeing Than Being Seen 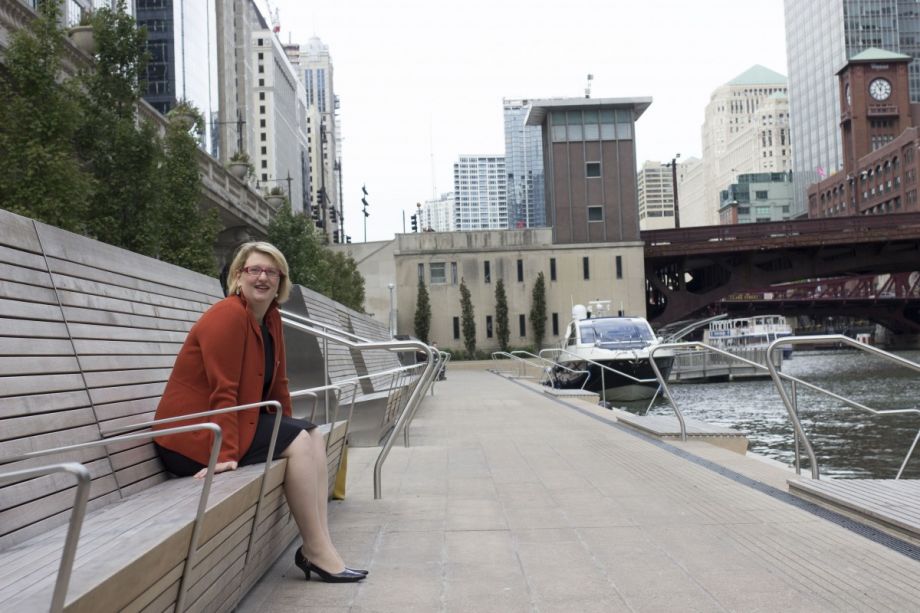 Gina Ford relaxes into a high-backed bench facing Marina City, a mixed-use Chicago complex that’s home to the two towers locals call the corn cob buildings. As she takes in one of her favorite architectural gems, she says, “I have to say there’s a special place in my heart for Marina City.” Ford is the principal of Sasaki Associates, the lead design firm behind the landscape of Chicago Department of Transportation’s expansion of the city’s Riverwalk, a pedestrian-friendly path along the Chicago River. The final phase is under construction and scheduled to open next year. (See bottom of this post for a photo gallery of some of Sasaki’s work on the project.)

The space on the blocks between each bridge are divided into water-level “rooms,” and three of the six rooms — Marina Plaza, The Cove and The River Theater — opened in the spring. The project has taken what was an uninviting industrial waterfront and turned it into an enticing public space. (Ford says design goals included giving the Chicago River back to the public.) Boats can easily dock along the riverfront, and when the final phase is completed, it will be a one-and-a-quarter-mile pedestrian and bike path reaching from Lake Michigan to Lake Street.

Ford’s in Chicago this week for the opening of the city’s Architectural Biennial and sees the chance to speak about the Riverwalk project at the event as both validating and nerve-wracking. As a landscape architect, she says she sometimes wonders whether the public thinks of her as a glorified gardener, and she’s pleased with the growing national attention to public space and placemaking.

Chicago’s seen a big focus on public space in recent years. There’s the Bloomingdale Trail, also known as the 606, which is an elevated pedestrian and bike trail system and park stretching 2.7 miles along abandoned train tracks on the Northwest Side. Maggie Daley Park, which is connected to the lauded Millennium Park, opened last year. The priorities align with Sasaki’s, according to Ford.

“We’re always looking to position the work that we do as sort of a broader idea,” Ford says. “Here is an example of a city investing in public space in such a significant way in so many different spaces. To us that’s super interesting and nationally significant. Each project is wonderful on its own, but if you think about the amount of change that’s happening across the whole city it’s amazing actually.”

Chicago Mayor Rahm Emanuel has professed that there’s a special place in his heart for the Riverwalk. According to local radio station WBEZ, last week when he and other private sponsors previewed the Biennial at the Chicago Cultural Center, he pointed to the project as an example of how changing a space can improve the mood of an environment.

Emanuel’s critics have called him Mayor 1 Percent, alluding to an attention to the Loop and other wealthy neighborhoods and neglect for less affluent areas, particularly on the South and West sides. When I asked Ford about that and about issues of gentrification being connected to improved green spaces and parks, she says she gets the concerns. But she maintains that public spaces are an imperative investment to keep a city competitive and desirable. She asserts that these spaces are for everyone, not just a privileged few.

“The Riverwalk belongs to everyone in the city. This whole bench was meant for people to sit here and be able to look up,” she says, her body melting into the bench facing Marina City. Chatter from passing architectural boat tours join the cacophony of the city. “There’s so much to be said about designing a space from which you can observe a city, as opposed to designing a space that screams to be observed.”