Charleston Plans for Connectivity Around a Sea of Asphalt – Next City

Charleston Plans for Connectivity Around a Sea of Asphalt 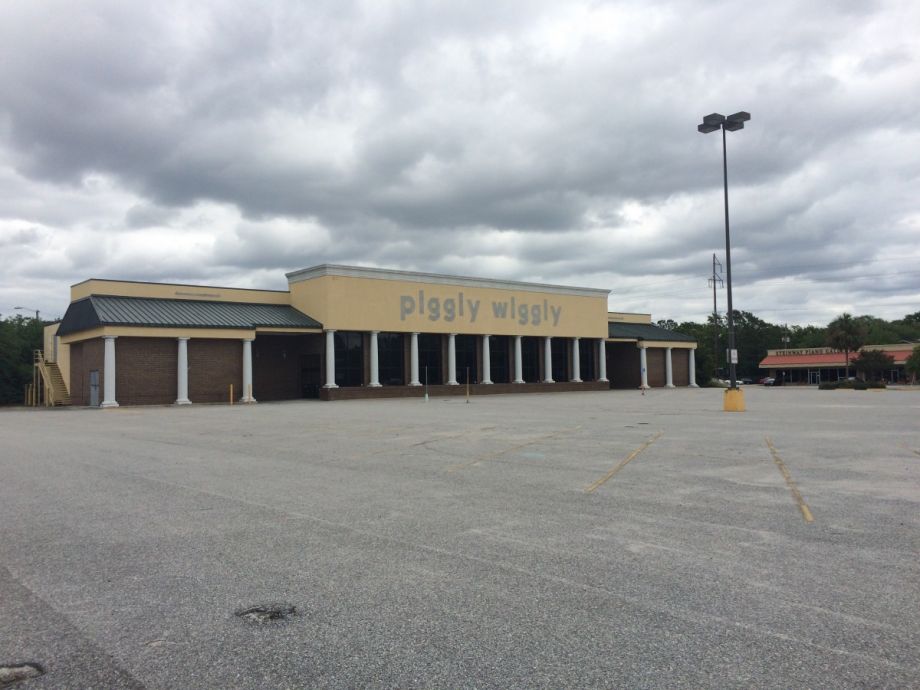 The site of a former Piggly Wiggly in Charleston, South Carolina, may be acquired by the city to improve traffic conditions and possibly create green space. (Photo by Jen Kinney)

Charleston, South Carolina, may be best known for its dense, charming downtown, located on a peninsula between the Ashley and Cooper rivers, but the majority of the city’s voting base lives in the suburban district of West Ashley, a bridge away. After decades of automobile-centric construction, the city is embarking on a massive public planning process to increase economic opportunity, revitalize the built environment and improve transportation — with a particular focus on connecting West Ashley to the rest of the city.

One opportunity to do all three might come in the form of an abandoned Piggly Wiggly, located on a sharp triangular lot directly across the bridge from North Charleston. A proposal by the lot’s current owners to build a Sunoco there was rejected by the city’s Design Review Board last year, and was unpopular with residents, who said they would prefer a use that improves community cohesion and simplifies the confusing traffic pattern there. Last week, Charleston City Council voted to give Mayor John Tecklenburg — who ran on a platform to revitalize West Ashley — the authority to call eminent domain on the site if the owners are unwilling to sell.

Katie Zimmerman, West Ashley resident and executive director of pedestrian and cycling advocacy organization Charleston Moves, says “the dead pig” is emblematic of both the challenges and promise of the area.

Just down the street from the Piggly Wiggly, in fact, is a park on the original site of the Charles Towne colony. And Northbridge Park was completed in 2014; more green spaces have popped up since.

There’s been talk of turning the Piggly Wiggly into a green space too, though some council members and residents have said they don’t like the idea of a park in the middle of a traffic island. The site is bounded on both sides by high-capacity roads, which merge at the tip of the triangular plot in what’s known as “the suicide merge.” It’s the first major intersection when entering West Ashley from the Northbridge.

“Right now it’s a big vacant building with a huge amount of surface parking, and it’s empty and it’s depressing,” says Zimmerman. With the confusing intersection, “it’s not user-friendly for anyone right now.”

Last week, she attended the first community meeting for Plan West Ashley, a public process to create a master plan for the area and one of Charleston’s largest planning efforts to date. At her table, she says, there was talk of turning the space into either a new grocery or a green space. The overall message, she says: “Whatever it is, I want to be able to walk to it.”

Walking and biking are major components of the West Ashley revitalization conversation, says Jacob Lindsey, Charleston’s director of planning. The mostly sprawling, car-centric district has both a bikeway and a greenway, “which can be great assets to move people around in West Ashley, but both of them need a little work to get them functioning the way that they really need to be,” he says.

Part of that is connecting back to the city core. The greenway currently terminates at the Legare Bridge, the site of a long-running debate about whether the city should replace a lane of car traffic with a dedicated cycle-pedestrian lane. Similarly, there’s no safe way across the Northbridge near the Piggly Wiggly.

Zimmerman puts it a little more harshly. “It is an absolute death wish to walk or bike over the Northbridge,” she says, and a choice few make if they have other transportation options. “It’s terrifying to watch, and it’s shameful that we haven’t addressed this. If we want equitable transportation options, that we are putting people in harm’s way who have no other choices is terrible.”

She acknowledges that the former Piggly Wiggly site might never become a destination in its own right, but it could become part of a larger network of cycling and pedestrian infrastructure. If there were a lane over the Northbridge, for example, and the “suicide merge” were redesigned to be safer for non-motorists, then the “dead pig” could become a pearl on a string of revitalized green spaces, or a new neighborhood shopping hub, or heck, even a new grocery store — anything but a sea of asphalt.

“It makes West Ashley into more of a place where you actually want to be,” she says. A large percentage of Charlestonians, including the mayor, live in West Ashley, “but most people are just sort of driving through or driving to something in West Ashley without actually enjoying a community experience that they could be.”

Lindsey says city ownership of the Piggly Wiggly parcel would be crucial to an intersection redesign, as part of the site would need to be carved up to make major changes. A new half-cent sales tax for transportation might make this and other projects, including possibly the long-awaited Legare Bridge redesign, more feasible. Public meetings for Plan West Ashley are continuing through May.