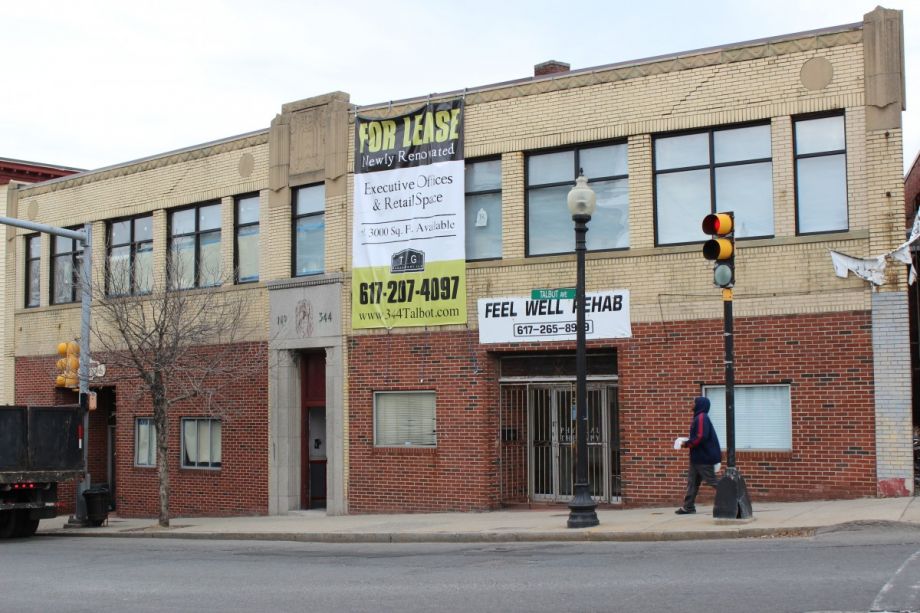 In the Dorchester section of Boston, the Codman Square Neighborhood Development Corporation (CSNDC) has been working for 25 years to, as they put it, “build a better, stronger community in Codman Square and South Dorchester by creating housing and commercial spaces that are safe, sustainable and affordable.” Yet, in a story that echoes a recent Next City feature on gentrification in nearby Somerville, transit improvements have led to increasing fears that longtime residents might soon become priced out of the historic area.

Working at the neighborhood block level as they do, CDCs around the U.S. typically have plenty of anecdotal evidence about gentrification fears, but the CSNDC decided it wanted hard data. So it commissioned a report on changes to Boston’s Codman Square to prod at two questions many communities wrestle with: What should the role of a community development corporation (CDC) be in the face of gentrification? And how do you determine who is the most susceptible to being displaced because of affordability issues?

Prepared by students and faculty in Boston University’s Urban Symposium, the study notes that the demographic and real estate trends seen in the neighborhood could be viewed as the “successful sustainable community work the development corporation has done over the past few years,” but that the same work could “ultimately pose a threat of displacement for low- to moderate-income residents.”

That “sustainable community work” included the addition of new transit stops on the Massachusetts Bay Transportation Authority’s Fairmount-Indigo rail line and the creation of an initiative for the neighborhood to become an Eco-Innovation District. Of course, new amenities often mean new residents and higher rents. To play out what could happen on this course, the Boston University team created a series of GIS maps that point out areas where low-income residents in Codman Square could see themselves pushed out because of rent increases.

The neighborhood has a high percentage of rentership — 70.5 percent of residents are renters. More than 60.5 percent of this subset are spending more than 30 percent of their incomes on housing costs, which makes them cost-burdened by HUD standards. 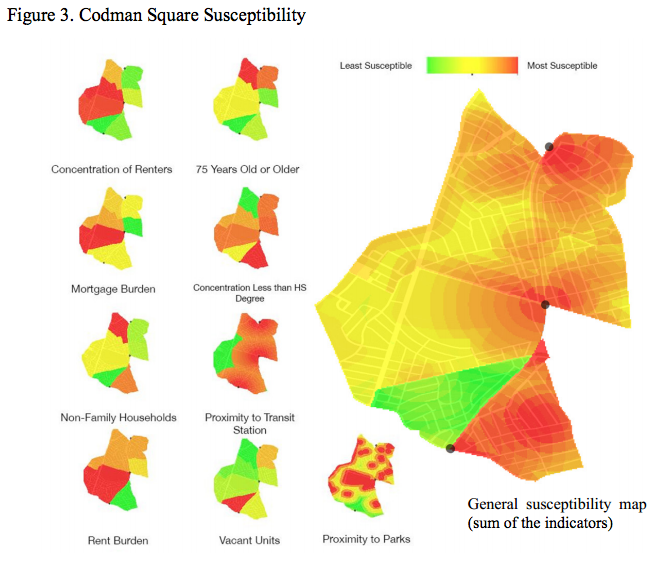 The smaller maps of Codman Square on the left side display indicators that might contribute to displacement, including the geography of renter concentration, proximity to parks and the location of the new T stops. The maps were then combined and weighed equally to construct an overall susceptibility map (on the right) to see what areas low- and moderate-income might be impacted by current conditions. The areas that are more red are “hotter” or more susceptible, and the areas that are more green are less susceptible.

“The key is to make sure that people are able to stay in place before it reaches that threshold where property values are so high that the people who’ve been living there for decades are priced out,” says Barbara Jacobson, who worked on the report and is now a program manager for the Massachusetts Bicycle Coalition.

“We created some best practices for the community development corporation to develop into their work plan,” continues Jacobson. “They are working to implement them, which is really fantastic. It’s just sort of a race against the clock to ensure that they’re done in a timely manner, so that the people who are living there can stay there.”

Recommendations included improving community outreach to the vulnerable elderly and aging residents in the neighborhood, increasing financial literacy and counseling services, and pursuing the regulation of condo conversions. The last is critical as the study found there’s potential for Codman Square to become a target for speculating investors and corporate landlords (something that’s happened in Atlanta). Condominium conversion limits and market-based homeownership programs could help not only mitigate displacement, but also increase homeownership.

“Their primary concern is about ensuring that the pricing structure of homes in that immediate area of the new T stations remain cost effective,” says Jacobson.

Since the completion of the study, CSNDC has continued to hear from locals that there’s been an onslaught of rent increases. Last month they held a public forum in order to engage with impacted residents. Executive Director Gail Latimore told the Dorchester Reporter that the CSNDC is joining forces with other advocacy groups. “We worked hard to get those stations built so we could get where we wanted to go at a fair price,” one of those organizers at the meeting told the Reporter, “not so these vultures can swoop in and trick people out of their homes.”