How a Not-Entirely-Polite Card Game Is Changing Urban Planning 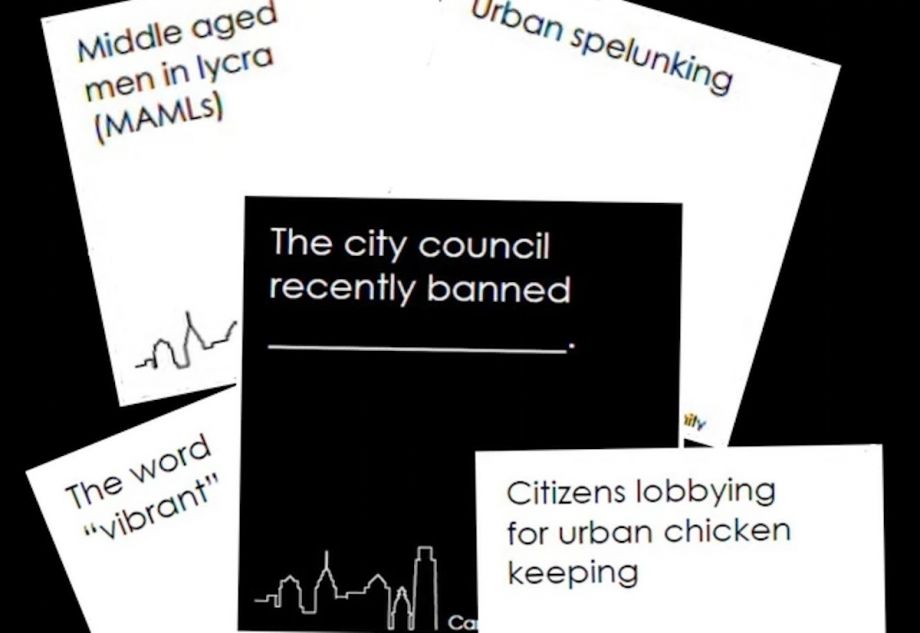 It started with a night of drinking in Washington, D.C.

The members of “Do Tank DC,” planners, architects, and activists, and the founder of Greater Places, an online hub for urban design, had a wild, not-entirely-sober idea to turn urban planning into a game. They thought maybe a couple hundred people would pony up for a snarky, inside-baseball game that poked fun at the tropes of trying to better a city. In the end, over 800 people pledged more than $28,000 in a Kickstarter campaign to bring Cards Against Urbanity to life.

Cards Against Urbanity is a (sanctioned) spinoff of the insanely popular Cards Against Humanity, which itself is a sort of unauthorized spinoff of the game Apples to Apples. The game works like this: One person plays a card that poses a question or fill-in-the-blank, like “The Mayor got in trouble for crowdsourcing ________”. Each other player plays a card that they think represents the “best” answer, like “The poor door,” “NIMBYs,” or “A stress ball shaped like Richard Florida.” The first player chooses their favorite answer, many laughs are had, and at some point, if at least one player is sober enough to keep score, one is crowned the winner.

Inevitably, say both Cards Against Urbanity creators and people who have played the game, there’s one person in the group who needs one of the cards defined. No really, why is “Stadium boondoggle” funny? Someone else will jump in and explain, and thus, Learning Happens. It may not be the kind of learning that counts toward continuing education credits, but it’s learning nonetheless.

Inspired by the ways Cards Against Urbanity players are educating each other about urban planning through in-jokes, the team behind the card game is launching a new, more serious stack of cards. Call it, if you wish, Cards For Urbanity.

Imagine, Do Tank and Greater Places say, a Pinterest board of urban planning — but in real life. Each card will have a single concept or buzzword on it — a woonerf or a protected bike lane or sneckdown — along with an illustration and a definition. The cards are remixable and rearrangable, of course, and the team thinks everyone can use these.

“The original game, you flip the cards and laugh,” says Brian McLaren, an architect and a member of Do Tank DC. “This next iteration will be a lot more flexible. It could be a ‘Pinterest board’ for a group talking about what they want their next local area plan to include. The mom or young couple that bought the house around the corner doesn’t know what these things are. Everyone says they want Starbucks, because that’s what they know. And nobody understands that they maybe want a makerspace, because that’s in Portland and someone in Akron doesn’t know what that is.”

“When a pilot takes off, they have a checklist,” says Abbey Oklak, a planner and architect and another Do Tank member. “That’s how I see these cards. As you’re doing a planning process, there’s all these competing interests that you have to look at. Having these cards laid out in front of you gives you that checklist to make sure that as you’re going through the design process, you’re not forgetting anything.”

Lisa Nisenson, founder of Greater Places, says she envisions the cards as being helpful in lengthy planning processes. After talking to people in the industry (mainly Cards Against Urbanity backers), she says the team discovered two “pain points.” “Everybody said, ‘we need to get beyond that small group of people that dominate discussions.’ The second one that started coming up is you constantly have new people coming into a public process that’s been going on for a while. What tends to happen is that as people get more involved in the process, the process grinds to a halt. The new people coming in say, ‘I didn’t know about this.’ One of the things we’re [looking] to solve with this project is, how can you give people a really quick way to get up to speed?”

Whether a set of cards will solve this problem is yet to be seen, but there is precedent. Design firm IDEO created an award-winning set of “method cards” that help designers communicate about certain design tactics to the rest of their team or the general public.

Meanwhile, Cards Against Urbanity continues to make waves. Most of the original sets have been sold. Catherine Hartley, the Florida planner, is also co-chair of the Florida Planning Association’s 2016 conference, and she gave partial sets out at this year’s conference as save-the-dates. Participants had to meet at least two other people in order to have a deck big enough to play the game, so it doubled as a networking tool.

“At first I was thinking I needed to take out the [cards] with the bad words, but … then I didn’t,” Hartley says. “I thought, ‘We’re all grown-ups here.’”

The success of the cards also shows, in a way, how the demographics of planning, architecture, and real estate are changing. McLaren, the architect, says several firms had asked about giving Cards Against Urbanity as Christmas presents to their clients.

“For years, I would give a book to a client to explain why we needed to design their parking lot this way instead of that way … but a book is not a fun way to learn.

“The client demographic is changing,” he adds. “You have the old, white-haired guy that’s maybe initiating the deal, but the people who sit there and have to justify everything, they’re much younger now. So … we’re not going to offend anyone.” He pauses. “Well, we might, but that’s OK.”

Planners in other cities have even created their own city-specific expansion packs, like in Richmond, Virginia, where community design nonprofit Storefront Richmond created cards poking fun at the city’s polluted sewers and Anatabloc, the dietary supplement illegally promoted by the state’s former governor, Bob McDonnell. “The cards were a good way to direct some of our discussions,” says Tyler King, program director of Storefront Richmond. “Or to like, just laugh about it and rearrange our frustration in a funny way.” And at a fundraiser where Bill Martin, director of the Valentine museum, showed up, he even took one of the Richmond packs for the museum’s collection.

“We are the city museum,” Martin says. “Everything Richmond we collect, from the beautiful to the profane.”

The Cards Against Urbanity team is celebrating the one-year anniversary of its successful Kickstarter tonight in Washington, D.C., as well as previewing the new product. Can’t make it to D.C.? Follow the latest news here.