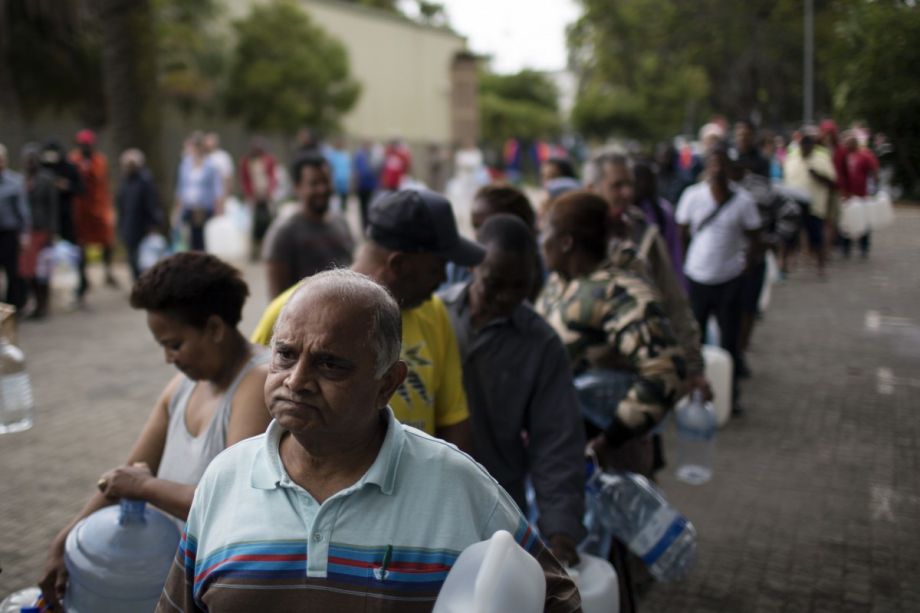 In Cape Town, South Africa, residents who take a plentiful supply of water for granted are preparing for massive water shortages in the city.

At some point in May, if water consumption continues at the current rate, the taps in the city will be turned off, leaving residents to access water by visiting one of 200 collection points throughout the city. Capetonians will be then playing a waiting game: hoping for the rains to arrive as soon as possible.

It’s a deep irony. While lack of water access is normally a driver for inequality in cities in developing countries, when the taps are turned off in Cape Town, it will actually become a driver for temporary equality. The rich and poor alike will be limited to the same amount of water per day.

But in Cape Town’s townships, or informal settlements, where around a quarter of the city’s four million people live, standing in line to access water from a standpipe is already a part of daily life.

In the cities where Water & Sanitation for the Urban Poor (WSUP) works across Africa, large low-income communities survive without what most of us would consider a basic essential: clean, safe water piped straight into houses.

The impact of water shortages in Africa’s cities is felt disproportionately by the poorest. In Nairobi, for example, which has suffered droughts in recent years, 60 percent of the population already lives without access to a reliable water supply. Instead, they buy water either from illegal vendors; or, if they are lucky, from shared facilities.

When water becomes scarce, the price paid by the poorest for water from illegal vendors skyrockets: sometimes up to 80 times what people with formal connections pay.

So the reality is that the Cape Town crisis is being played out in every city in Africa, every single day.

As climate change increases the frequency of droughts, and urbanization increases the demand for water, we are only going to see more low-income residents face the brunt of water shortages. We need to step up action now to improve availability of water for low-income city dwellers.

The first step to addressing any challenge is recognizing the problem. Cities need to stop thinking about extreme events as unusual and prepare for severe water shortage. Three dry winters in Cape Town was supposed to be a once-in-four-hundred-years event, but it happened nevertheless. The sooner that cities recognize this new reality, the sooner they can start identifying new approaches to improved water management, learning from traditionally water-scarce countries such as Israel, which pioneered the use of drip irrigation technology in agriculture.

Water shortage in urban areas is not just an issue for cities, it’s an issue for the whole water ecosystem. Improving water stewardship is therefore critical, and this requires close collaboration between the government, regulators, service providers, agri-industry and so on. Ensuring that trees are planted rather than destroyed, encouraging farmers to reduce use of fertilizers and minimize sediment run-off, and ensuring sewage is treated rather than dumped into the water system – these are all essential components of improving water security from source to tap.

Clearly water utilities, which have a responsibility to provide a city with safe water, have a major role to play in addressing the challenge. Utilities need to get smarter about understanding water consumption patterns in their cities, introducing district metering areas and using pressure control and GIS technology to better control their operations.

A key strategy we have long advocated for to improve services to low-income residents is improving water availability by cutting losses from leaking pipes, malfunctioning meters and theft. In Antananarivo, the capital of Madagascar, the city’s utility JIRAMA has been able to improve water availability for hundreds of thousands of low-income residents by reducing losses and therefore releasing water for the residents on the periphery.

Improved financial management within utilities is also vital: A recent World Bank report found that just under half of the utilities it analyzed are unable to cover their operations and maintenance costs through their revenues. It is hard for utilities to prepare for the future if they are unable to cope with the present, although in part this is an issue that national governments could address by altering the tariffs so that utilities are able to charge customers a fair price.

Communities can also make more efficient usage of water, ensuring that limited resources are stretched. Shared facilities can be better designed so that, for example, grey water from a laundry block or captured rainwater is used to flush toilets.

A common pushback against investing in water supplies in informal settlements is the impact that this might have on other areas of a city. This, however, is a non-issue. In Cape Town, the one million residents of townships only use 4.5 percent of the city’s water supply.

Research published by WSUP and the University of Leeds backed this up, forecasting that if yard taps were extended to every single housing compound in Accra, Ghana, this would only result in a two percent increase in water consumption.

Another challenge is the perception that poor people won’t pay for services, and so there’s no business case for a utility.

With improved customer management skills, utilities can start to take advantage of this opportunity, helping to ensure that the poorest urban citizens do not suffer disproportionately in an increasingly water-scarce world.

Neil Jeffery is chief executive of Water & Sanitation for the Urban Poor.