Can the High Line Use Its Notoriety to Advance the Park Equity Movement? – Next City

Can the High Line Use Its Notoriety to Advance the Park Equity Movement? 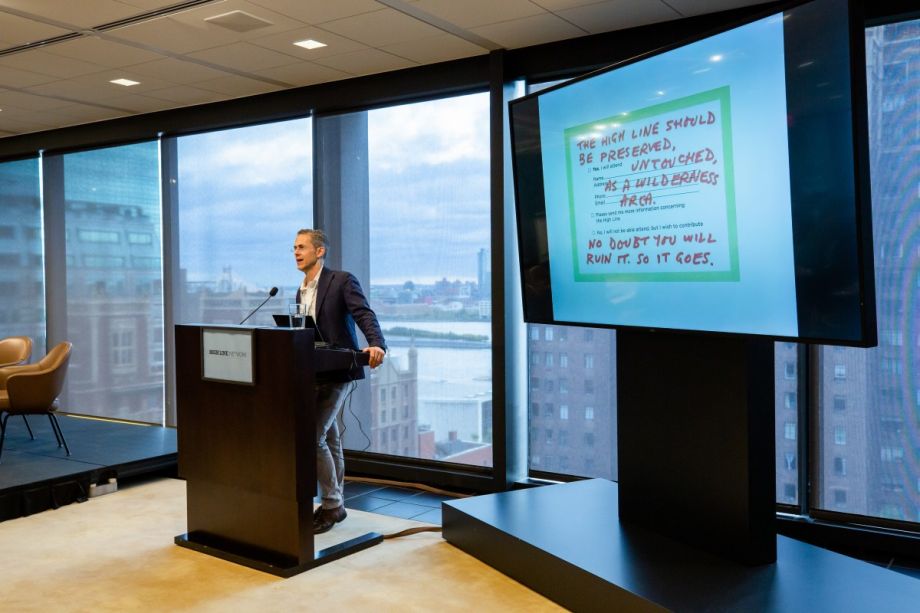 Robert Hammond, co-founder and executive director of the High Line, spoke to representatives from 60 other adaptive reuse projects around the country about how future projects can learn from the High Line's mistakes. (Photo by Liz Ligon, courtesy Friends of the High Line)

Three years ago, online real estate marketplace Streeteasy analyzed the impact of the High Line on New York City’s real estate. The iconic elevated park on Manhattan’s lower west side built on abandoned railroad, Streeteasy found, raised the median price of condos above 20th Street to over $6 million, with at least 20 apartments along the High Line going for more than $10 million between 2009 and 2016. Since then, the West Chelsea neighborhood along the High Line has continued to transform; the home for the rich is now becoming an enclave for the superrich. After mega development Hudson Yards opened up on the northern end of the High Line in March this year, penthouses in the area list between $22-$59 million on Streeteasy.

It may, therefore, come as a surprise to many that the High Line has attached its name to the burgeoning park equity movement. Earlier this month, Friends of the High Line, the nonprofit that operates and manages the High Line in collaboration with New York City Department of Parks & Recreation, brought together leaders of 60 infrastructure reuse projects from the U.S. and Canada for a symposium titled “Economic Impact and Beyond.” Its goal was to examine if new public spaces, being created out of underutilized infrastructure, were incorporating equity considerations into their plans and explore strategies to ensure that benefits from such projects reach all communities.

Friends of the High Line organized this event as the leader of the two-year-old High Line Network, a group of urban projects that are turning old infrastructure into new public spaces. These range from public squares and gardens to open-air museums and transit corridors. But why would anyone, let alone massive urban revitalization projects like Washington DC’s 11th Street Bridge Park, the Atlanta BeltLine or Houston’s Bayou Greenways 2020, take the High Line’s belated focus on equity and distribution seriously?

(Photo by Liz Ligon, courtesy Friends of the High Line)

With the High Line becoming sort of an emblem of urban inequality, Friends of the High Line seems eager to put its notoriety to good use. Robert Hammond, co-founder and executive director of the High Line, told the audience, “Once you create the value. it’s very hard to capture it back. The biggest lesson I have for you is about capturing the value. [Considerations like] affordable housing, job retention, cultural preservation will be different in every neighborhood. But if you think you are going to deal with those issues after you’ve built, it will be too late.”

Indeed, the symposium brought the focused attention of project representatives and their enablers (policymakers, donors, academia, environmental nonprofits) to the reality that low-income communities risk losing out on the social, health, environmental and economic benefits that come with transforming urban infrastructure into greenspace, if equitable impact is not factored in from the get-go.

On the face of it, one could argue that the High Line has not displaced the long-time residents of public housing. There are two New York City Housing Authority (NYCHA) public housing developments in West Chelsea, now abutting condos and penthouses. But as Stephen Gray, assistant professor of urban design at the Harvard Graduate School of Design, pointed out during a panel discussion after Hammond’s keynote address: “Displacement takes many forms. How many of those people’s children can move back to their neighborhood after college?”

“The affordable housing train has left the station for us,” said Hammond, but in other ways the High Line has been trying hard to broaden its appeal. When it first opened in 2010, only about a fifth of its visitors were people of color. By 2017, that proportion was up to 35 percent. “This is not a huge success, but an ongoing part of something we are always going to be working on,” he acknowledged.

What’s bringing more low-income people to the High Line is targeted outreach, free programming such as salsa dancing and educational sessions on the High Line. At least 80 percent of program attendees are New York City residents and two-thirds are people of color. Interestingly, according to Hammond, surveys shows a shift in the perception of NYCHA residents; they are now more likely to think of the High Line as a neighborhood park even as the wealthy residents have begun to see the park as too touristy and crowded.

Still, what happens on the High Line is just one facet of equity issues surrounding urban spaces. Friends of the High Line hosted this three-day gathering at its offices near the High Line and at The Ford Foundation Center for Social Justice in midtown Manhattan. It was well attended by representatives of infrastructure-reuse projects and experts working in this field. The participants discussed emerging topics like how design considerations can address equity, the role of cultural preservation in ensuring thriving spaces, and how green spaces can further other public policy priorities.

In the years ahead, open space and population density will be even more intertwined. Already more than half of the world lives in urban areas, and by 2050 that proportion will go up to almost 70 percent. The High Line Network eventually expects to add international projects. As a stunning example of all that’s good, bad, and ugly in new urban landscapes, the High Line might just make its impact felt well beyond the New York City real estate market.

Deepali Srivastava is a writer and editor whose articles on socio-economic and environmental issues have appeared in Forbes Asia, MSNBC.com, strategy-business.com, and Warscapes.com. She is Senior Director of Content Strategy at Global Gateway Advisors.